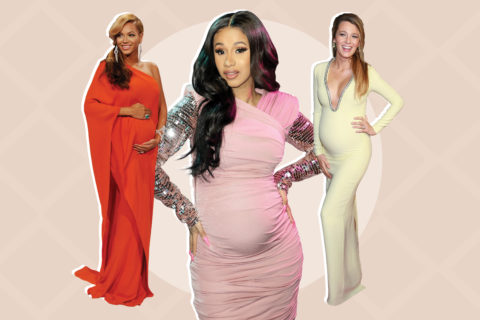 And stop sweeping real stories of fertility under the rug.

It’s next to impossible to flip through the pages of a lifestyle glossy or scroll on social media without being confronted by articles speculating about a celebrity’s baby bump or analyzing their “post-baby bikini body.” This fascination with famous uteri is an extension of the way we glorify reproduction in our culture at large, and frustratingly, the media’s celebrity pregnancy obsession is narrowing the scope of how pregnancy and fertility are discussed more broadly.

This reproductive surveillance not only perpetuates a culture of obsession with childbearing bodies, it also sweeps much of the physical toll, financial cost and burden under the rug. The result? A huge portion of people trying to conceive are operating under unrealistic expectations, weighed down by guilt and shame, or left out of the conversation entirely.

Dr. Lila Hakim, a psychologist and director at Toronto’s Centre for Interpersonal Relationships, says her patients often express a “confusion around what the norms are” when it comes to conception and fertility, and that confusion can stem from the way fertility is covered in the media.

“It sets up ideas [that the fertility journey doesn’t require] a lot of resources — financially, time-wise, support wise,” Hakim, who specializes in family-building and fertility issues, says. “Rather than seeing the whole, that sliver [of coverage] creates expectations that people then potentially compare themselves to and say, ‘Well, how come that’s not happening for me?’ That can be quite confusing because people don’t necessarily have access to the same resources and no one’s journey is the same.”

There’s also the matter of expectations. When we see a celebrity in their 40s and 50s having a baby, the story behind the pregnancy is told too infrequently. Brigitte Nielsen is one exception. The Creed II actor, who used IVF to have a daughter at age 54, was upfront about the realities of that process. “You’re on a lot of medication. It is very expensive,” she told The Guardian in 2019. “You always think you’re going to get pregnant, but most of the time, the phone call comes and it’s: ‘I’m sorry.’ It is devastating.” Nielsen likened her chances of conceiving to winning a lottery — and she is among a privileged group who can afford the ticket price.

“It’s lonely,” says Canadian clothing designer Laine Gabel, the creative and owner behind the Hasting County, Ontario brand Mildred Handmade, whose struggles with fertility stem from endometriosis, its sister disease adenomyosis, and fibroids. “That’s how I feel when it’s just like a basic pregnancy announcement. I scroll past it quickly, I don’t click. I mean, I still cry every single time I see labour on a TV show.”

Gabel points to the element of ableism inherent in the way we talk about celebrity pregnancy, which fails to acknowledge that everyone’s reproductive organs don’t work the same way. Endometriosis, for example, a chronic health condition that can cause pain, fatigue, organ dysfunction and infertility, can result in scar tissue on reproductive organs that make conception difficult. On top of that, the drugs used in fertility treatments can cause endometriosis flare ups.

“If there was a more general acknowledgement and basic understanding of the complexities of these things, then we would have more empathy for the average person who is infertile. We wouldn’t just be like, ‘So when are you having kids?’ It’s not just this basic bodily function for everybody,” she says.

But that’s slowly changing. While social media feeds continue to be populated with strangers’ rounded bellies and aestheticized portrayals of newborn life, it’s also become a platform for recent breakthroughs in the kinds of conversations we’re having. In early 2020, Amy Schumer used Instagram to detail her IVF experience — right down to the number of eggs retrieved (35), the number fertilized (26), and the number of healthy embryos that came out of it all (one). And this past summer when Chrissy Teigen shared her family’s loss of their third child with a series of personal photos documenting the partial placental abruption that led to her miscarriage, she gave thousands of women an overt and lasting permission to grieve a kind of loss that for so long remained untalked about. It’s a step in the right direction, but there’s still a ways to go.

“You still don’t hear about people who use donor eggs,” says Dr. Carrie Schram, a Toronto MD whose practice is in fertility and low risk obstetrics. She explains that women in their mid- to late-forties and beyond are often using that method. “I think that’s the area of fertility that remains very taboo… Once you’re looking at donor eggs, there’s no discussion.”

The struggle to conceive continues to be treated like a dark secret or, at best, a private matter while coverage of celebrity fertility focuses overwhelmingly on the tiresome bump watch and over-the-top birth announcements. But across both traditional media and on social media, celebrity pregnancy stories are given a platform because there’s a guaranteed audience — measured in clicks, likes, and reshares. We, the audience, engage with these stories with little consideration about how they turn women’s bodies into objects with a singular purpose: reproduction.

“Reproduction is highly glorified. Sure, it’s a part of who we are and what we do as a species but so does every other species that exists,” Schram says. “I think this creates a lot of binary distinctions that otherwise wouldn’t be there. Fertility’s a spectrum, and whether you have a harder time getting pregnant at 40 or not, it actually has zero relation to your value as a person…I think your value as a person should be, ‘How kind are you? Do you contribute in a meaningful way to the lives of other people?’ Not, ‘Did a sperm reach your egg and implant efficiently?’”

Gabrielle Union put it best when she suggested that the way we currently talk about the subject of pregnancy requires a complete rethink. “For so many women… people feel very entitled to know, ‘Do you want kids?’” Union told People ahead of the release of her 2017 book We’re Going To Need More Wine, where she opened up about having “eight or nine miscarriages.”

“A lot of people, especially people that have fertility issues, just say ‘No’ because that’s a lot easier than being honest about whatever is actually going on. People mean so well, but they have no idea the harm or frustration it can cause.”

And though we don’t expect that notion of entitlement — observable not only in media but in politics and in our day to day lives — to disappear anytime soon, changing the way we talk about celebrity pregnancy could pave the way for more meaningful conversations around fertility in the future.