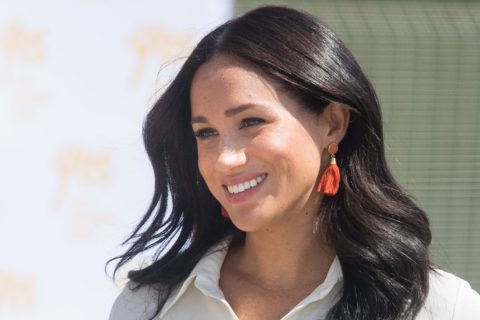 "We share an understanding of the abuse and intimidation which is now so often used as a means of disparaging women in public office from getting on with our very important work."

The animosity and vitriol directed towards Meghan Markle since her royal relationship was made public in 2016 has prompted Prince Harry to issue multiple statements to the press decrying “the wave of abuse and harassment” stemming from tabloids, newspapers, social media and more. In a recent documentary filmed on their royal tour of South Africa, the Duchess spoke out about how difficult the negative press coverage has been for her, especially as a new mom.

Over the past several months, many of Markle’s friends have spoken out publicly about her mistreatment by the media and now, UK politicians too, are voicing their support of the Duchess. Holly Lynch, a Member of Parliament from Halifax, tweeted yesterday: “Women MPs from all political parties have put aside our differences to stand in solidarity with the Duchess of Sussex today and are sending her this open letter.”

Women MPs from all political parties have put aside our differences to stand in solidarity with the Duchess of Sussex today and are sending her this open letter. pic.twitter.com/ytLHG5qPf4

“On occasions, stories and headlines have represented an invasion of your privacy and have sought to cast aspersions about your character, without any good reason as far as we can see,” the letter reads. “Even more concerning still, we are calling out what can only be described as outdated, colonial undertones to some of these stories. Although we find ourselves being women in public life in a very different way to you, we share an understanding of the abuse and intimidation which is now so often used as a means of disparaging women in public office from getting on with our very important work.”

In an interview with a political correspondent at ITV News, MP Lynch confirmed she received a call the next day from none other than Markle herself, who thanked her for the letter. Lynch, in turn, reiterated their statement of support, saying, “We were quite happy to stand with her and recognize that what she’s going through has on occasion had xenophobic undertones… We stand with her in challenging that and we will look to do everything we can at this end if some of our national press do not have a healthier, shall we say, interest in her life.”

EXCL: 'I got a phonecall. It was Buckingham Palace asking me was I available to speak to the Duchess of Sussex.'

Meghan Duchess of Sussex called @HollyLynch5 this morning to say thank you. It comes after the Halifax MP sent her a cross-party letter of solidarity from female MPs. pic.twitter.com/8ykIEEvrbG

This public show of support comes just weeks after the Duke and Duchess of Sussex filed a lawsuit against The Daily Mail, The Sun, and The Daily Mirror for their negative coverage of Markle. “Unfortunately, my wife has become one of the latest victims of a British tabloid press that wages campaigns against individuals with no thought to the consequences—a ruthless campaign that has escalated over the past year, throughout her pregnancy and while raising our newborn son,” Prince Harry said in a statement earlier this month. “To stand back and do nothing would be contrary to everything we believe in,” he added, in reference to the legal action he and his wife have taken.

After clips from the South Africa documentary started doing the rounds on social media, showing a visibly distressed Markle sharing how difficult her life has been in recent years, #WeLoveYouMeghan began trending on Twitter as people from around the world chimed in to voice their support and encouragement of the Duchess. This latest show of solidarity from some of the UK’s most prominent female politicians, who have said they will “use the means at [their] disposal to ensure that the press accept [Markle’s] right to privacy and show respect,” is likely to only help the Duchess as she continues to navigate her new life as a royal.