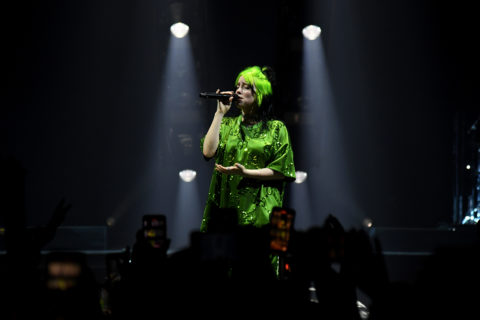 Billie Eilish is performing at an immersive virtual concert tonight.

From an immersive concert livestream by Billie Eilish to the latest season of David Letterman’s talk show, here’s all the news you missed this week.

Billie Eilish announced an immersive virtual concert
Billie Eilish is here to entertain us all this weekend. The Grammy-winning singer will be performing at a multi-dimensional virtual concert on Saturday, October 24 at 6pm EST. Using state-of-the-art XR technology and multiple cameras and 3D environments, Eilish will be performing live with her brother Finneas on a 60ft x 24ft stage surrounded by giant 360 LED screens, providing a rich immersive experience. The Where Do We Go? livestream will also include a pre-show of exclusive merch and content, including a teaser of the upcoming Apple TV+ documentary Billie Eilish: The World’s A Little Blurry. The livestream will be viewable on demand for 24 hours for ticket holders. Get your tickets here.

from rehearsal ? in the show i’ll be bringing you inside my head in crazy xr environments. aaaaaand there’s gonna be a pre-show before with trivia and a never before seen scene from the doc ? tickets at livestream.billieeilish.com

Spotify launched a daily wellness playlist
Given how stressful daily life has been since the coronavirus entered our lives, Spotify’s new playlist couldn’t be more welcome. Called Daily Wellness, the playlist features a mindful mix of music and motivational podcasts that can be found in the ‘Made for You’ shelf on mobile, web and desktop. Refreshed twice daily, the content is curated for listeners based on their unique listening habits and preferences. The evening edition is specifically built to help prepare for a good night’s sleep and includes meditation podcast Daily Breath with Deepak Chopra and poetry from The Slowdown.

Spotify listeners in Canada, Australia, Philippines, Malaysia and Singapore can now get a dose of #DailyWellness. Tune in to enjoy that much-needed “me time.” https://t.co/IyqWvikGNY

David Letterman released new episodes of his talk show
The third season of My Next Guest Needs No Introduction hosted by David Letterman is now available to stream on Netflix. The first four episodes of this season feature guests Kim Kardashian West, Robert Downey Jr, Dave Chapelle and Lizzo, who all sat down with the legendary talk show host for a one-hour interview. High-profile guests on previous seasons include Barack Obama, Tiffany Haddish, Tina Fey and George Clooney.

The Toronto International Festival of Authors kicked off this week
Featuring 200 virtual events and activities such as conversations, readings, performances, podcasts and more, the Toronto International Festival of Authors’ 2020 edition is now live. The lineup for the opening day of the festival on October 22 included An Evening with Margaret Atwood and a virtual storytelling tour about Toronto’s Indigenous history. The rest of the events scheduled for the 11-day festival (which concludes on November 1) include a free event with philosopher and The School of Life co-founder Alain de Botton, an interview with acclaimed Canadian novelist Emily St. John Mandel, and a conversation about “The Politics of Black Lives” featuring author and Ryerson professor Dr. Cheryl Thompson. Get details here.

We are excited to bring you our most innovative Festival yet! With an incredible lineup of authors & over 200 free virtual events, it will be the largest literary festival in Canada this year. Registration opens worldwide on September 29. https://t.co/nwYQrrwk5v #FestofAuthors20 pic.twitter.com/lpzAF0gPiY

Euphoria announced two bonus episodes coming soon
HBO show Euphoria starring Emmy winner Zendaya is releasing two special episodes ahead of season 2. According to Deadline, the first special episode (titled “Trouble Don’t Last Always,”) will follow Rue over Christmas and will debut on December 6 but details for the second episode are still unknown. Zendaya shared a teaser for the first of the two episodes on Instagram on Monday, captioning, “We really missed them. Two special Euphoria episodes coming soon. First one December 6th on @hbo.”

And ICYMI, we spoke to actress Sasha Lane about her new sci-fi show Utopia, and rounded up some ideas for a fun Halloween celebration at home.

Photo by Kevin Mazur/Getty Images for Live Nation
Get the best of FASHION in your inbox Thanks for signing up!
The latest fashion, beauty and celeb news delivered right to your email #FASHIONforall Now, check your inbox to complete your subscription
We won’t ever use your email address for anything else
Want even more FASHION? Follow us on social media.