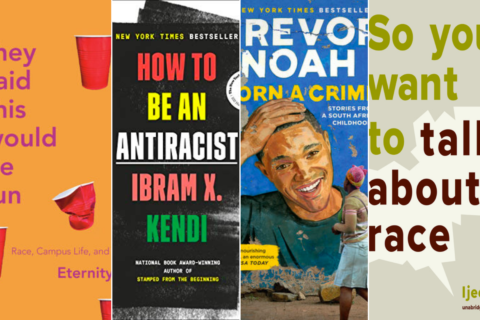 20 Audiobooks About Race and Racism to Download and Learn From

Listen to Trevor Noah, Barack and Michelle Obama, Toni Morrison and Maya Angelou's stories in their own words.

Anti-racism reading lists have been doing the rounds over the last couple of weeks. But rather than just a performative display of allyship, we hope this movement brings about real change, which will only be possible if people make the genuine effort to seek out Black voices, read more about systemic and structural racism, and do the work to unpack the implicit bias and racial disparities that have led us to this moment.

We recently shared a roundup of 72 books, movies, podcasts and resources to educate yourself on anti-Black racism, but if audiobooks are more your thing, these 20 titles—some narrated by the authors themselves—are a good place to start.

You can find audiobooks at Audible, Google Play, Scribd, Apple Books, Overdrive, Libro and various other iOS and Android apps.

Between the World and Me by Ta-Nehisi Coates
Hailed by Toni Morrison as “required reading,” this book addresses questions about American history, the idea of “race,” and the Black experience in the form of an intimate and urgent letter written by the author to his adolescent son. The audiobook is narrated by the author, Ta-Nehisi Coates, adding to the personal weight of the book. Length: 3 hours and 35 minutes

The Skin We’re In by Desmond Cole
In a 2015 cover story for Toronto Life, Desmond Cole exposed the racist actions of the Toronto police force, detailing the dozens of times he had been stopped and interrogated under the controversial practice of carding. His subsequent book chronicles just one year—2017—in the struggle against racism in this country, and he narrates its audio counterpart himself. Length: 8 hours and 14 minutes

Me and White Supremacy by Layla F Saad
Narrated by Layla F Saad, an anti-racism educator and international speaker based in Qatar, this audiobook teaches listeners “how to dismantle the privilege within themselves so that they can stop (often unconsciously) inflicting damage on people of colour, and in turn, help other white people do better, too.” Length: 5 hours and 19 minutes

Born a Crime by Trevor Noah
Exclusively available on Audible, the audiobook is narrated by Trevor Noah himself, and tells the story of the comedian and Daily Show host’s experience growing up as a biracial child in South Africa during Apartheid. Length: 8 hours and 44 minutes

Becoming by Michelle Obama
In this memoir, Michelle Obama takes people on a journey through the experiences that shaped her—from her childhood on the South Side of Chicago to her years as an executive balancing work and motherhood to her time in the White House. Narrated by the former First Lady herself, the audiobook won the Grammy for Best Spoken Word Album this year. Length: 19 hours and 3 minutes

Policing Black Lives by Robyn Maynard
Montreal writer Robyn Maynard’s intersectional approach to anti-Black racism addresses “the unique and understudied impacts of state violence as it is experienced by Black women, Black people with disabilities, as well as queer, trans, and undocumented Black communities” in Canada. Length: 12 hours and 16 minutes

They Said This Would Be Fun by Eternity Martis
Written by a Toronto-based journalist, this memoir shares what it’s like to be a student of colour on a predominantly white campus, namely, Ontario’s Western University. Narrated by the author, the audiobook paints a visceral picture of four years of anti-Black racism and tokenization by fellow students, romantic partners and others. Length: 7 hours and 42 minutes

The Color Purple by Alice Walker
There are two audiobook versions of this Pulitzer Prize-winning novel available exclusively on Audible: one narrated by the author Alice Walker herself, and one performed by Emmy-winning actress Samira Wiley. Taking place mostly in rural Georgia, the story focuses on the life of African-American women in the Southern United States in the 1930s. Length: 7 hours and 58 minutes

I Know Why the Caged Bird Sings by Maya Angelou
The abridged audio version of this coming-of-age story, tracing Maya Angelou’s childhood and adolescence in a small rural community during the 1930s, is narrated by the author herself. Length: 3 hours

Girl, Woman, Other by Bernardine Evaristo
Through 12 central characters—black British women of various backgrounds—this novel paints a portrait of the state of post-Brexit Britain, and also looks back at the legacy of Britain’s colonial history in Africa and the Caribbean. Length: 11 hours and 6 minutes

Dreams From My Father by Barack Obama
Originally published back in 1995, when Barack Obama was just starting his political campaign for the Illinois Senate, this memoir journeys from New York to Kansas to Kenya as Obama—the son of a black African father and a white American mother—traces his family history and reflects on growing up between two worlds. Narrated, of course, by Obama himself. Length: 7 hours and 8 minutes

Beloved by Toni Morrison
Narrated by Toni Morrison, this book by the Pulitzer- and Nobel Prize-winning author “stares unflinchingly into the abyss of slavery,” telling the tale of a young woman, born a slave, who escaped to Ohio but 18 years later is still not free. Length: 12 hours and 3 minutes

Stamped: Racism, Antiracism, and You by Ibram X. Kendi and Jason Reynolds
A “remix” of the National Book Award-winning book Stamped from the Beginning by Ibram X Kendi, this audiobook sees Kendi teaming up with YA author Jason Reynolds to reveal the history of anti-Black racism in America and inspire hope for an antiracist future. Length: 4 hours and 11 minutes

In the Black by B. Denham Jolly
This book lays out writer B. Denham Jolly’s personal and professional struggles in Canada as a Jamaican student who went on to become a high school teacher before entering the nursing and retirement-home business. As an advocate for the Black community, he also fought a long battle to get a license for a Black-owned radio station in Toronto, eventually launching it in 2001. Length: 8 hours and 39 minutes

They Call Me George by Cecil Foster
This untold story about the birth of modern Canada shares the experiences of Black train porters whose minority status rendered them “politically invisible and second-class in the social imagination that determined who was and who was not considered Canadian.” Length: 12 hours and 56 minutes

You Can’t Touch My Hair by Phoebe Robinson
This essay collection about race, gender and pop culture from comedian and 2 Dope Queens podcaster Phoebe Robinson is as hilarious as it is political and poignant. Length: 7 hours and 41 minutes

Raising White Kids by Jennifer Harvey
For parents questioning how (and when) to speak to their children about race, this book is an important tool, written for families, churches, educators and communities who want to “equip their children to be active and able participants in a society that is becoming one of the most racially diverse in the world while remaining full of racial tensions.” Length: 8 hours, 59 minutes

Sister Outsider by Audre Lorde
Presenting the essential writings of Black lesbian poet and feminist writer Audre Lorde, this collection of fifteen essays and speeches takes on everything from racism and sexism to ageism and homophobia. Length: 7 hours, 32 minutes

How To Be An Antiracist by Ibram X Kendi
In this audiobook, author and historian Ibram X Kendi helps listeners work through antiracist ideas to help “see all forms of racism clearly, understand their poisonous consequences, and work to oppose them in our systems and in ourselves.” Length: 10 hours and 43 minutes

So You Want to Talk About Race by Ijeoma Oluo
Addressing issues as privilege, police brutality, intersectionality, micro-aggressions and more, this book by writer Ijeoma Oluo helps to bridge the gap between people of colour and white Americans struggling with race complexities. Length: 7 hours and 41 minutes