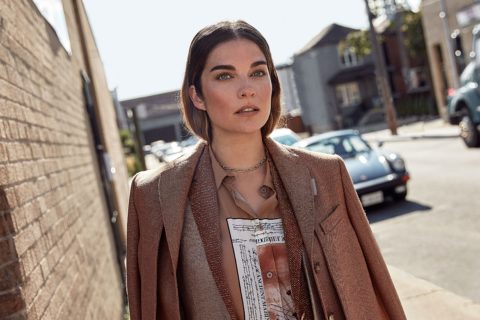 How Many Celeb Name Drops Can Annie Murphy Remember from Schitt’s Creek?

From a blind date with a certain Hollywood heartthrob to a tryst with a famous British royal, Alexis Rose has done it all.

Us Weekly once described Alexis Rose as “up for anything,” a factoid the socialite-turned-PR consultant is pretty dang proud of. That “anything” has taken her from the beaches of Bali to a Saudi prince’s palace to the trunk of a Thai drug lord’s car and even a yacht overtaken by Somali pirates, so suffice it say this is a lady with a past. But does Annie Murphy, who portrayed the self-obsessed but endearing globe-trotter on Schitt’s Creek for six seasons, remember all the hilarious lines, outrageous name drops, and high-stakes situations Alexis was involved in? On the set of our October cover shoot with the Ottawa-born actress, we decided to find out.

“On paper, Alexis is a bit of a handful and incredibly selfish, and she could be taken as a ditzy blond,” said Murphy in the cover story. “But it was really important to me to not have her be unlikable because I think so much of who she is is based on her surroundings and her environment. She’s not a bad person; she’s actually quite a good and kind and selfless person. But it was all really deep down and had to be mined out.”

Dan Levy, who co-created the show and also shares wardrobe duty with costume designer Debra Hanson, says a lot of his idea for Alexis was formed when he met Annie. “As soon as I saw her, I knew we were going down a path of high-end, easy French design, like the Isabels and the A.P.C.s and the Chloés, you know—softer pieces from those collections.”

“To be able to wear these absolutely outrageous outfits every day was such a treat,” says Murphy, who kept a chunky Isabel Marant sweater and snakeskin Gucci sandals from Alexis’s wardrobe when the series wrapped after its sixth season earlier this year. And for those itching to see the actress on their screens again: good news. She has her next project all lined up; read more about it here.

PHOTOGRAPHY BY CARLYLE ROUTH. STYLING BY ELIZA GROSSMAN. CREATIVE DIRECTION BY GEORGE ANTONOPOULOS. HAIR, SARAH AMSON FOR P1M.CA/BANG SALON. MAKEUP, RONNIE TREMBLAY FOR P1M.CA/MARC JACOBS BEAUTY. MANICURE, SHIRLEY TRUONG FOR P1M.CA/TIPS NAIL BAR. FASHION ASSISTANT, ASHLEY GALANG. PHOTOGRAPHY ASSISTANTS, MARK LUCIANI AND STACY SPIVAK. PROPS BY THE PROPS/THEPROPS.CA.
Get the best of FASHION in your inbox Thanks for signing up!
The latest fashion, beauty and celeb news delivered right to your email #FASHIONforall Now, check your inbox to complete your subscription
We won’t ever use your email address for anything else
Want even more FASHION? Follow us on social media.