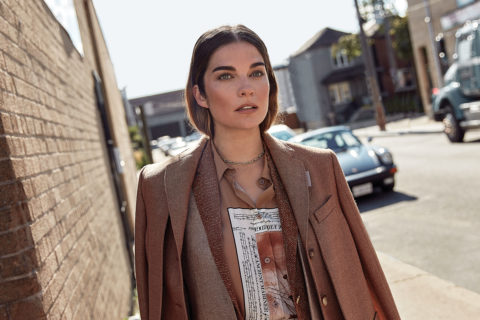 She's set to play the lead in a new AMC dark comedy titled Kevin Can F– Himself.

As Alexis Rose on Schitt’s Creek, Annie Murphy forever changed the way we look at spoilt, socialite heiresses. Now, she’s set to do the same upending of conventions for another cliched stereotype—the sitcom wife.

The Ottawa-born actress has just been confirmed as the star of new AMC television series Kevin Can F– Himself, a dark comedy that explores the inner life of the typically passive, sidekick sitcom wife. “Alternating between single-camera realism and multi-camera comedy, the formats will inform one another as we imagine what happens when the sitcom wife escapes and forces the world to let her take the lead,” explains Variety.

The title is a nod to canceled CBS comedy Kevin Can Wait, which controversially killed off its own “sitcom wife”—lead character Kevin James’s wife, played by Erinn Hayes—and replaced her with James’ former co-star from King of Queens, Leah Remini.

“Annie is an undeniable talent with the ability both to play comedy and to break your heart. She is the perfect fit for the role of Allison, the perfect actor to bring to life creator Valerie Armstrong’s genius vision,” Sarah Barnett, president of AMC Studios, said in a statement. “Cracking open the conventions of the ‘classic’ American sitcom to expose what’s swirling beneath, in this highly inventive and entertaining way, is the kind of story we are hugely excited to tell at AMC.”

Giving a fleshed-out, fully-realized dimensionality to a typically overlooked type of character might fast become a Murphy speciality. It’s precisely what she’s been lauded for with her portrayal of Alexis Rose. “On paper, Alexis is a bit of a handful and incredibly selfish, and she could be taken as a ditzy blond. But it was really important to me to not have her be unlikable because I think so much of who she is is based on her surroundings and her environment,” she told FASHION in her October 2019 cover story. “She’s not a bad person; she’s actually quite a good and kind and selfless person. But it was all really deep down and had to be mined out.”

We look forward to a lot more character mining when Kevin Can F– Himself hits our screens. No timeline has been announced but the network has confirmed that the show will consist of eight hour-long episodes. Stay tuned for more details.

PHOTOGRAPHY BY CARLYLE ROUTH
Get the best of FASHION in your inbox Thanks for signing up!
The latest fashion, beauty and celeb news delivered right to your email #FASHIONforall Now, check your inbox to complete your subscription
We won’t ever use your email address for anything else
Want even more FASHION? Follow us on social media.