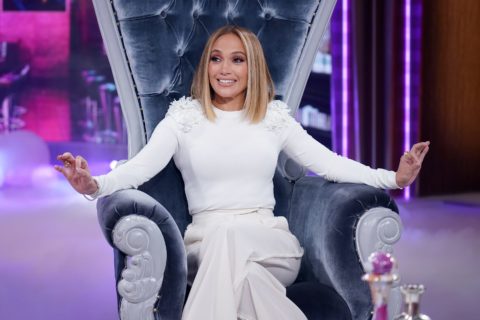 After over 20 years, J.Lo will walk the Golden Globes red carpet as a nominee.

Each year, the Golden Globe Awards celebrate the best in TV and film from the past 12 months, recognizing achievements across 25 categories. And what a year it has been, especially for Jennifer Lopez who recounted her 2019 accomplishments on SNL this past weekend. This year saw the actress turn 50, land a performance at next year’s Super Bowl halftime show, walk the Versace runway in Milan wearing that iconic dress, get engaged and produce and star in her biggest movie to date, Hustlers. To add to that list, J.Lo now has her second-ever nomination for a Golden Globe Award, thanks to her supporting role in the aforementioned film. The star received her first Golden Globe nomination in 1998 for her role in Selena. Both nominations came from honest depictions of women and their true stories.

This morning, Susan Kelechi Watson, Dakota Fanning and Tim Allen joined the Hollywood Foreign Press Association to announce the nominees for the 77th Golden Globe Awards, which will be take place at the Beverly Hilton in LA on January 5. The evening will be hosted by comedian Ricky Gervais, who created, directed, produced and starred in After Life, a Netflix exclusive television series. Speaking of Netflix, the streaming platform picked up 17 nominations this year as a motion picture distributor and TV network, with HBO following with 15. Marriage Story saw the most nominations for motion picture, with six nominations, and Chernobyl, The Crown and Unbelievable lead in TV series/programs with four nominations each.

Other notable honourees include Jennifer Aniston and Reese Witherspoon, both up for Best Performance by an Actress in a Television Drama Series for Apple TV+’s The Morning Show. The show itself is nominated for best TV drama series. Beyoncé pops up for her award-worthy music in The Lion King alongside Taylor Swift’s “Beautiful Ghosts.”

See some of this year’s nominees below:

Best Performance by an Actress in a Motion Picture – Drama:

Best Performance by an Actress in a Supporting Role in Any Motion Picture:

Best Performance by an Actress in a Television Series – Drama: