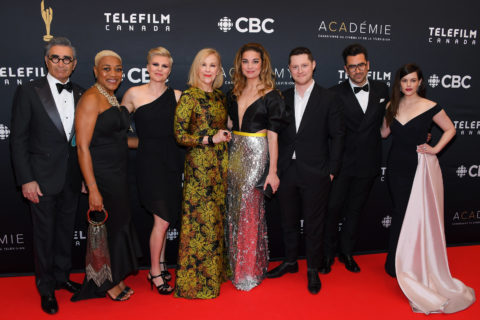 Nominated for a record-breaking 26 trophies at the 2020 Canadian Screen Awards, beloved TV show Schitt’s Creek—which wrapped its sixth and final season last month—took home six of the night’s biggest honours. In light of the coronavirus pandemic, the awards ceremony—originally scheduled for late May—has been taken online, with a series of virtual presentations announcing the winners over the course of four days. Last night, the spotlight was on television.

Canadian legends Eugene Levy and Catherine O’Hara received the awards for best lead actor in a comedy and best lead actress in a comedy respectively, Emily Hampshire took home a trophy for Best Supporting Actress, and the show also won Best Comedy Series. Additionally, Lisa Parasyn and Jon Comerford won for Best Achievement in Casting, and Annastasia Cucullo and Ana Sorys won the Best Achievement in Hair award for their work on the Season 5 episode “Life is a Cabaret.” Catch Dan Levy, Eugene Levy and Catherine O’Hara’s acceptance speeches (taped from their homes, of course) on the Schitt’s Creek Instagram account here.

Other comedy hits that won big include The Baroness von Sketch Show, which took home all the five awards for which it was nominated in the Variety or Sketch Comedy category, and Kim’s Convenience and Letterkenny earned two awards each. On the drama side, Anne with an E, which also recently ended its run, won five awards. Murder mystery Cardinal took home seven awards during the virtual ceremony including best drama series, best writing for a drama series, and best lead actor and lead actress in a drama series.

This year’s national awards will culminate with the Canadian film competition trophies, to be handed out tonight. A complete list of 2020 Canadian Screen Award winners so far is available here.

Photo by George Pimentel/Getty Images
Get the best of FASHION in your inbox Thanks for signing up!
The latest fashion, beauty and celeb news delivered right to your email #FASHIONforall Now, check your inbox to complete your subscription
We won’t ever use your email address for anything else
Want even more FASHION? Follow us on social media.