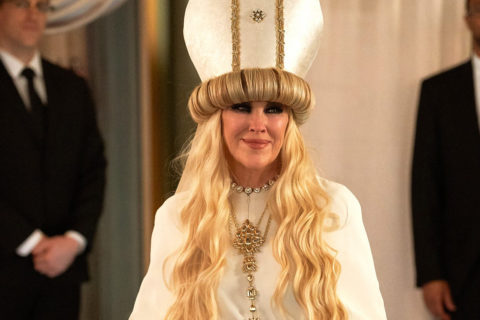 If, like all of team FASHION (and the rest of the world it seems), you watched the Schitt’s Creek finale last night, then you’ll immediately recall the sure-to-be-iconic look that Moira Rose wore for David and Patrick’s wedding. Sweeping through the town hall donning a Met Gala-worthy get-up and a knee-length wig, the moment felt like the ultimate culmination of Catherine O’Hara’s character. I audibly gasped when the doors opened, a fact I unashamedly tell Ana Sorys, the lead hairstylist on Schitt’s Creek who was responsible for this moment as I called to speak with her about the look.

As it turns out, O’Hara was involved in the ideation of the hair. “When the script first came out, Catherine and I were talking about what she might look like for that [moment], what her hair might look like. We knew that she was going to be wearing a hat, then she had this idea to do a halo made out of hair. When I saw her confirmed look, I suggested to Dan and her that we do an insanely long wig – something that flowed with her outfit. That was how it came together,” Sorys explains, adding that Catherine sketched “a self portrait” on her phone to show her what she had in mind.

#SelfPortrait sketch by #CatherineOHara …when describing to me where the #Halo would sit around the papal hat. She drew this on my phone before I had proposed the insanely long hair. #MoiraRose Officiant in “Happy Endings” episode 14 season 6 #SchittsCreek #SeasonFinale #Canadian #Actress #Style #Fashion #Icon #Wig #WigStylist #WigStyling #CBC #NetFlix #POPtv

The wig was initially 40 inches, but Sorys decided to go ahead and add another 20 inches to it. “I thought it would look better if I made it longer, and I’m really glad I did,” she says, adding that it was the trickiest wig to date. Particularly thanks to the hair halo. “At first I thought it was going to be easy, that I would just get hair and wrap it around this malleable piece (that was stuffed pantyhose that wardrobe had helped me with). When I started making it, I initially had to sew the hair onto it but then [when I started] wrapping it, I couldn’t sew it, and I couldn’t glue it without the hair acting like hair – it was going to frizz, fray, and separate once we bend it. I literally worked on it for a few weeks and I couldn’t find [the right thing to help it hold]. And then finally I had this glue that I used for my tiles on my kitchen floor and I used that to keep the hair in place. It stayed perfectly. Dan watched me work on that for a few weeks, and he was like, ‘You know what? I’ve been seeing how hard you’ve been working on this but if it doesn’t work, don’t worry about it.’ And I was like, ‘No, were going to do this, it’s going to go down. I’m way too invested now.'”

Invested is indeed the right word. Sorys attached the hair piece by piece to the halo. “I couldn’t just use one long piece because it wouldn’t wrap evenly and I couldn’t use a small piece because it would divide. It was an interesting process. But I did it!” I suggest that it seems fitting that there was this much effort put into into Moira’s last wig on the show. “For sure,” she agrees. “And [Catherine] loved it so much.”

As for the incredible wave that cascaded down the length of the wig, Sorys explains this was achieved by her finger rolling “all of the hair, each individual strand.” She tells us, “When Catherine came in that was the last thing we put on her so I undid all the pin curls and that was it.” And as it turns out, the gasp that escaped my mouth as I watched it was a shared sentiment between the cast and crew when Catherine walked onto set in the full look. “I kept it a secret from everybody what I was going to do – even Dan didn’t really know what was going to happen,” she explains. “And when [Catherine] was finished getting ready in the trailer and walked onto set to do the scene for the first time, the reaction that I got from the cast and crew was a career highlight for me. When they saw her, especially seeing Dan look at her and say ‘This is incredible’, meant everything to me.” Understandably, it’s her favourite hair look she created across seasons three to six.

The wigs were such an integral part to Moira’s character, so much so that Ana says she ended up with around 25 for the final season. “My first year there was season three and when I came on board, Dan said, just have 9 or 10 wigs on hand to start off with. [Catherine’s] process is that she would pick the wigs on the fly – she’d have her wardrobe and everything on and when she’s Moira, she would be like, I’m feeling this wig. We didn’t really match the wig and the wardrobe. When season six rolled around, I had 24 to 25 wigs that we started off with. I went wig happy! I had them all set up in the trailer for inspiration so she would see them everyday.”

I ask if they also had names like they did in the show, which Sorys tells me they didn’t, save for a few that would be named later. Though she shares a fun story involving Catherine and the wigs in season six. “In the first episode of season six, there’s a scene with Roland and Moira’s afraid that the wigs are going to be in a fire in the motel room and so she calls out the names of these wigs. When it aired on TV she invited all of the friends she named the wigs after to her house to watch the episode and her friends got to see that she had named the wigs after them.”

Considering she had to have so many wigs on hand for the show, I ask whether her house is overflowing with them right now. “What I’ve done is labeled them with whatever season and episode [they were used for], netted them and put them in bags. No one else but Catherine will ever wear those wigs. I’m hoping that maybe in the future somewhere one of the wigs will kind of be re-worn – who knows! For now, they’re kind of resting at my place,” she says with a laugh.

I tell her that the ‘maybe in the future somewhere’ could be a Schitt’s Creek movie. “Oh, wouldn’t that be amazing,” she says. Wouldn’t it indeed.