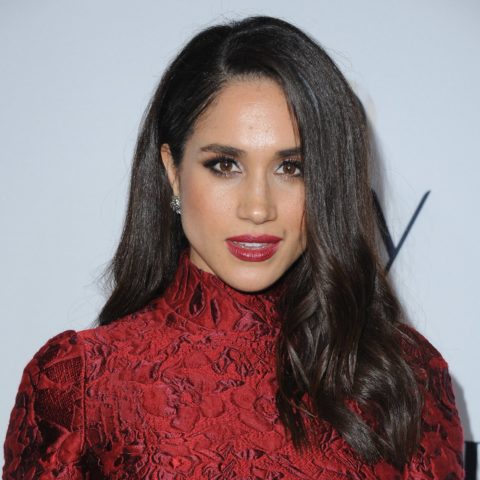 We love a good love story — and apparently, so does Meghan Markle. The only difference: while we wait patiently for a prince to sweep us off our feet, Markle is well on her way to a royal Happily Ever After.

After months of rumours and speculation, the princess-to-be (*fingers crossed*) is finally speaking out about her relationship with royal favourite, Prince Harry. In a long and varied cover interview for Vanity Fair, the Suits actress opened up about dating a prince, falling in love, and dealing with public scrutiny.

Is this the prep-work for a royal engagement announcement? Here’s hoping…

In Vanity Fair's October cover story, @MeghanMarkle opens up about living in the spotlight, starring on @Suits_USA, and her whirlwind royal romance: "I think it’s really simple. We're two people who are really happy and in love." Photograph by @therealpeterlindbergh.

Here are eight things we learned about Markle from her tell-all interview.

Markle served Sam Kashner, contributing editor at Vanity Fair, a spread of organic greens, crusty bread, and pasta tossed with Terroni’s famous Peperoncini Piccanti. She told Kashner that the spice was courtesy of “a little place called Terroni, which they have in L.A. and in Toronto. They’re really hot, but if you’re good with heat, then I think they’re going to be your new favourite thing . . . I’ll give you a little jar to take home.” For those interested in making their homes a little more Markle, you can buy the chilis online here.

2. She’s accustomed to the Canadian cold.

“Seven Canadian winters!” she said, apparently enthusiastically, of her time filming suit in Toronto. Though Markle admits, it’s “a long time for someone who grew up in Southern California.” According to Kashner, the L.A. born actress “has tried to make her Canadian house look like a California bungalow, exposing the hardwood floors and letting in as much light as possible.”

If Markle marries Prince Harry (which, come on, is pretty much an inevitable), she will become the first American to wed into the royal family in 81 years. And the last time a state-born-divorcee, it caused quite a stir in the monarchy. In 1936, King Edward VIII abdicated his title less than a year after assuming the throne to marry twice-divorced American socialite Wallis Simpson. You’ll remember this plotline from Netflix’s The Crown. (Or, like, from your history books.)

4. She grew up on the set of Married…With Children.

Markle’s father was a lighting director in Hollywood, who primarily worked on sitcoms and dramas.“Every day after school for 10 years,” Markle told  I was on the set of Married . . . with Children, which was a really funny and perverse place for a little girl in a Catholic-school uniform to grow up.”

5. She was the first member of her family to go to college.

At 18, Markle left L.A. to attend Northwestern University in Illinois, where she majored in theater and international relations.

6. She loves her freckles.

More fame means more photoshoots, and one thing Markle has noticed is that photographers frequently airbrush out her freckles. “I’ve always loved my freckles,” she says, adding that she was thrilled to be photographed by Peter Lindbergh, as he believes in minimal makeup and rarely retouches his images.

News of  royal coupling hit tabloid last October, with the couple stepping out together for their first paparazzi photograph in February. According to Markle, the duo successfully kept their dating private before the big public reveal.

“We were very quietly dating for about six months before it became news, and I was working during that whole time, and the only thing that changed was people’s perception. Nothing about me changed. I’m still the same person that I am, and I’ve never defined myself by my relationship.”

8. They’re a happy couple, and they’re in love.

“We’re a couple,” she told Vanity Fair. “We’re in love. I’m sure there will be a time when we will have to come forward and present ourselves and have stories to tell, but I hope what people will understand is that this is our time. This is for us. It’s part of what makes it so special, that it’s just ours. But we’re happy. Personally, I love a great love story.”

Does this mean she wants us to stop being so nosy? Nice try, Meghan.

Photography by Jon Kopaloff/FilmMagic
Trends, beauty secrets, culture & more
Yours for only $1 an issue
Subscribe now!