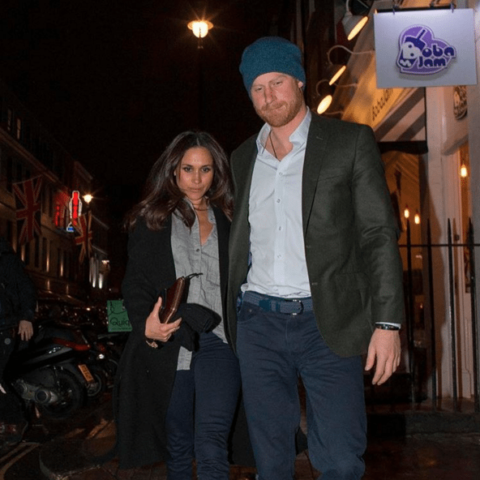 Now THIS is the definition of Royal couple goals, folks.

Prince Harry and Meghan Markle have officially (!!!) taken their romance to the next level: The Royal and the Suits actress were spotted leaving London’s members-only Soho House (the place where they first met!) before being photographed hand-in-hand walking down a crowded West London street.

Like the cool couple they are, the duo emitted an effortlessly chic vibe. Harry paired his blazer with a beanie, and Markle gave Canadian retailer Aritzia a major shout, donning the brand’s Veritas Shirt.

“They tried to keep as low-key as possible and were sitting in a small snug area of the restaurant,” a bystanded told The Sun.

According to the Daily Mail, the couple is getting cozier than we thought. It is rumoured that Markle—who has been dating Harry for 6 months—has “virtually moved in” to his cottage at Kensington Palace.

Is an engagement coming soon? Perhaps a televised Royal wedding is on it’s way? Stay tuned.

Photography via Instagram/fashioncanada
Trends, beauty secrets, culture & more
Yours for only $1 an issue
Subscribe now!