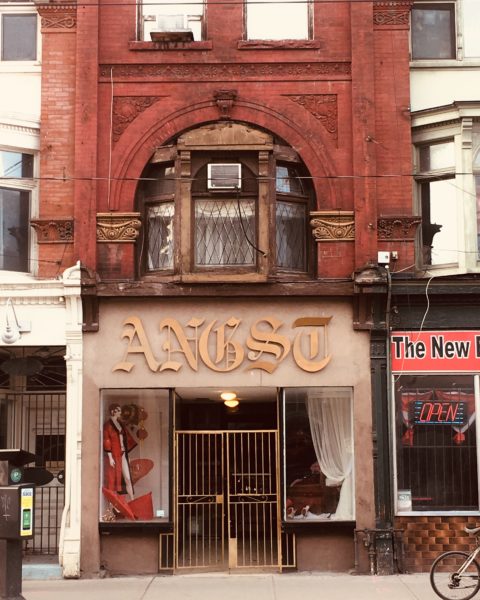 Located in a neighbourhood that seems like the east end’s last stand against gentrification, Toronto’s Angst Hair is the opposite of a gilded Yorkville salon with an espresso machine and a ring light for before-and-after selfies. Its gritty storefront features windows dressed with costumed mannequins and quirky vignettes designed by artists Shane Murphy and Jennifer Morton. Owner Bill Angst’s cockapoo Lloyd greets you upon entering, along with a friendly chorus of hellos from long-time Angst employees and popular stylists Sandy Ciuro, Gaetano Cariati and Roxy Cornwall. It’s a decidedly low-key destination for the loyal clientele who come for the expert cuts and colour. Considered Toronto hairdressing royalty (along with Jie Matar and Ray Civello), Angst is a revered stylist who is all about real talk: he turns people away if he feels that they would look better with longer hair, telling them to come back in six months to a year. “My clients are my friends,” says Angst, who opened his salon doors in 1989 with his friend the late Marco Greco.

Marking its 30th anniversary this month, Angst’s salon has always been the place to be. “People beg. It’s not pretty. We’ve had people lie,” Angst told former FASHION editor-in-chief, Leanne Delap, in a piece she wrote for The Globe and Mail back in 2004 about the long wait list of people hoping for some chair time with Angst, including “IBM execs to cool young artists and rock stars,” who pre-booked their appointments six months out so as not to lose their coveted spot. Angst is FASHION alum, too, working with the mag in the 80s and 90s under its first editor-in-chief  John Mackay. He worked for all Canada’s major magazines and newspapers, and did hair makeovers on The Dini Petty Show and Cityline long before on-air transformations became commonplace. His salon was namechecked in Vogue by Barbara Atkin, Holt Renfrew’s fashion director at the time, and he was friends with Dean and Dan Caten before they became DSquared2—a picture of the trio on set in New York is one of many featured in a series of collages created for the anniversary party held a few weeks ago. Angst was also instrumental in Fashion Cares, a high-wattage fundraiser started in 1987 by Toronto’s fashion and arts community to raise money for AIDS research.

FASHION sat down with the Angst to talk about his start in hairstyling, rollerblading in Gaultier and why he’ll never retire.

This interview has been condensed and edited.

What was the first hairstyle you wore?

“The David Bowie haircut from his Ziggy Stardust era when he had orange hair that stood up on top of his head. My father called it the Rooster Cut. All the local rock bands and cool people were wearing it. So, when I was 13 years old, I hitchhiked into town and got the Rooster Cut.”

What was the first haircut you gave someone else?

“When I was getting the Bowie cut, I asked the hairstylist how she did it. She said ‘Easy: A meets B meets C meets D,’ which is exactly the kind of geometry I was learning in my drafting class at school. When I came home my sister Leslie said ‘I love your haircut,’ and I said ‘I can do it for you.’ So I cut her hair the same way. She was talking on the phone the whole time. It was impeccable. Then we went over to our friend’s house and I cut their hair exactly the same way. My cutting evolved from that and I taught myself how to do perms and highlights on Leslie’s hair. We changed her hair constantly. She came to the salon’s 30th anniversary party which was a big thrill. She has Parkinson’s disease now, and she has really bad days—for her to come is a big deal to me because she was the first haircut I ever did.”

How did your career begin?

“I hitchhiked from our farm in Ponsonby, Ontario to Kitchener-Waterloo every day to go to hairdressing school when I was 16. I wasn’t late once, and I passed with flying colours. I knew how to do everything. When I was 17, I took an advanced training class at [a salon chain called] Glemby International. The trainer told me that I could cut circles around him, and that I should be in a bigger city. He eventually quit and went work for [the late hairstylist] Robert Gage. And then I took over his job as the Canadian trainer for Glemby when I was about 20 years old.”

Did you admire any hairstylists when you were starting out?

“When I was taking courses at Glemby the trainer would show video clips of Garren. He was the hairdresser who showed me how to do point cutting [a layering technique]. And Christiaan was my other influence because he was more avant garde. [French hairdresser] Alexandre de Paris was my God for doing French rolls and things like that. I even have one of his brushes. It’s the golden brush. People ask to borrow it. I’ve had a lot of brushes disappear from my station, but the golden brush is one constant.”

How did you start working in fashion?

“My friend Tony Vermillion went to fashion school at George Brown and opened up a clothing company called Vermillion Clothing. I was a full partner in the company with him and we had our first big fashion show with Comrags. I did the hair for Vermillion. Barbara Sgroi was the Fashion Editor at the Toronto Sun, and she asked me to do work for her. Then she moved to Flare and she got me to do work there.

Where was the fashion crowd hanging out back in the day?

“Everybody was hanging out at Bemelmans. It was the meeting place. It was a bar and a restaurant with an outside patio, and the bar was just packed. Those are the days when people were going to buy stuff from the bartender.”

When did you decide to move to New York?

“After I left Glemby, I worked with [hairstylist] Denis Bouchard. And then I decided I wanted to move to New York, so I rented a chair in a salon and made a bunch of money and moved there. I was doing international jet setters’ hair and doing editorial, working for advertising companies, Holt Renfrew, and fashion labels like Diane Pernet. I did the hair for her lookbook and her fashion shows. I had a pretty good life in New York. I was hanging out with Trustafarians at all the clubs and all the parties. But I moved back to Toronto because my whole group of friends was starting to move away, back to the places they were from like Egypt, Paris and Italy. I was out on the street one day, it was hot and it stunk like urine, and I thought ‘do I really want to stay in this place and make a whole new group of friends, or do I want to go home and have continuum?’”

When did you decide to open your salon?

“When I moved back to Toronto, I was working out of a salon where they tripled my chair rental [fees] in less than a year. I had no interest in opening a hair salon until that happened to me. I thought ‘I need to open a salon for creative kooks to make a good living and not be taken advantage of.’ Hairdressers are notoriously sort of flighty and don’t really have business acumen, and so I’ve created an environment where people don’t have to have that and can still run their own business and be self-employed. Sandy joined Marco and I a couple of years later when I fell and broke my wrist rollerblading [and I needed someone to take care of my clients]. I was known downtown for being the kooky guy on the rollerblades. I was dressing in Gaultier, and my picture was on the cover of newspapers and stuff like that.”

Yeah, I saw that you were on the cover of Toronto Life in the early 90s with ballet dancer Rex Harrington. Tell me about that?

“That was the gay guide to Toronto. It came out just before Pride. They wanted two notable guys on the cover. And we were both at the height of our career at that time. Well, he was at the height of his career. With my career, there has never been a height, it’s always been fabulous. I don’t plan on having a height. I’m going to retire… never.”