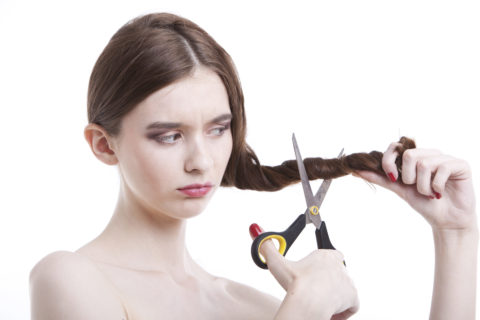 We explore the fascination with high-priced haircuts and celebrity stylists.

Only two people are allowed to cut my hair: Bill Angst and me. Twice a year, I’ll avoid other discretionary spending and pay $170 for a haircut from Angst. If I’m out of town for weeks or months at a time and my hair is most of the way down my back, I use a pair of drugstore hair scissors and the memorized instructions of a YouTube tutorial to vaguely follow the lines of his most recent cut. No hairdresser would condone this behaviour, but I feel like DIY-ing between my biannual cuts is a better option than seeing someone less expensive.

Angst is actually on the low-key end of the stylists who charge what your dad thinks is way too much for a haircut. His salon is on a semi-gnarly strip on the east side of Toronto; he feels he could raise his prices but doesn’t want to. “I’m in a low-rent district and I pass the value on to my clients,” he says. “It seems to work for me.” Jie Matar, whose salon is in the big-money Yorkville neighbourhood in Toronto, is the most expensive Canadian hairdresser, with a fee of $450; Ray Civello, founder of the Civello salons, sometimes works out of his Rosedale location in Toronto and charges $250 per cut; Maurice Fiorio cuts on Thursdays and Saturday mornings in his Yorkville salon, charging $210. In Vancouver, Michael Levine charges $200 for new clients. Price can, of course, be deceiving. In Montreal I couldn’t find anyone charging more than $125. Alain Larivée, of CAJH Maitres Coiffeurs, charges between $70 and $100. “You don’t forget where you come from in this city—we’re more relationship-based than money-based,” he says, explaining that cuts are “a reflection of your geographic reality.” On the verge of leaving the salon world behind for private appointments only, Robert Gage, former Toronto Life cover boy and stylist to a pantheon of bold-face names and billionaires, charges around $100 for an in-salon cut (he cost more before the crash). Gage often cuts at his clients’ homes—“house calls, like an old-fashioned doctor”—where some have salon-style set-ups and prices are “quite a bit different.” With the best-known celebrity stylists, costs can get higher: Paris-trained Frédéric Fekkai’s rate is $750 per cut, while Sally Hershberger charges $800 and New York-based Ted Gibson—whose clientele includes Angelina Jolie, Lupita Nyong’o and Cameron Diaz—charges $1,200.

Whether $200 or $800 or even $1,200 is a reasonable or disgusting amount to spend on a haircut—this is not including colour, hair products or, in some cases, even a post-cut blowout—depends on whom you ask. Like most other things in the realm of beauty, fashion, luxury and customer service, the perceived value is totally subjective. Gibson, a soft-spoken former Texan, tells me that a high-priced haircut is like any other commensurate luxury experience. For example, at a Gucci store, “You’re offered a beverage, you’re escorted from aisle to aisle,” he says. “It’s the level of service, the level of quality, the level of customer care.” Gibson is with a client for an hour and 15 minutes; he does his own shampooing and head, neck and shoulder massages; he walks clients to the change room, talks to them about products and arranges for their next booking.

Levine tells me that only one out of 20 clients he sees is new—he’s retiring from cutting and currently “breaking up” with clients—but they’ve been waiting so long to get in that “the price is no object, and they’ve built up this expectation, and you have to live up to it. And if people are coming in to get a $200 haircut, you’d better give them a $300 experience.” Mary Symons, a publicist, former model, client and friend of Gage’s, calls him an “entertainer and bon vivant.” She knew about his “legendary reputation” before meeting him socially. “It’s, quite frankly, a privilege to go to Robert Gage. He has not taken on new clients for many years. It’s more like being invited to see Robert Gage,” she says.

The high stakes of a high-priced cut also demand a high level of confidence. “Robert is quite strict about a cut,” says Symons. “You can’t cross your legs. You can’t be drinking coffee. The cut is very serious. You follow the Robert Gage rules and you get a great result.”

I’ve heard Matar will introduce a cut as being part of his new collection, like a fashion or accessories designer might. “For the hours I’m behind my chair, I’m devoted,” Matar says. “It’s not my ego or anything, but I’ve never met anyone who loves hair, and does it, like me.”

Hair colour, especially highlights, is where the most expensive hair experience really happens, but for me, colour is optional: I move casually between my natural dark brown and turbo-blonde, but my hair is always going to be long and purposefully undone. Since cut is about texture, structure and length, it’s more foundational to a person’s face, body and look; colour is more ephemeral and cosmetic.

Obviously, no one needs a high-priced haircut. It is aesthetically and even economically reassuring, though, to pay $170 for a great haircut twice a year—until I ruin them myself, my cuts grow out kind of perfectly—and preferable to spinning the proverbial wheel with a $60 or $80 stylist every two months for a higher annual total of around $420.

Paying more might intensify the experience, or at least the frisson of status. Gibson says that his market can bear his high prices—which started at $450 10 years ago and increased to $650, then $950, then $1,200—and a great cut like his is “what women are looking for.” Levine, who owns three salons, says that his prices almost create more desire to get in, if his clients are willing to wait for an appointment. Like anything worth having, not getting it right away usually makes the eventual experience that much better. Then there are the insiders who have the status of being on the “friends and family” discount list, which gives them access to a special experience. “People like to say they’re getting this $200 haircut, and they love to say, ‘But I don’t pay that, because I’ve been going to him for a long time,’” says Levine.

A high-priced cut can also be a practical solution to an abstract problem. The idea of getting something that is “the best” is quick (but pricey) relief from the insidious anxieties women have about their beauty and femininity. Being expensive doesn’t necessarily make something right for you, but it’s an aggressive hedge against doing some part of womanhood “wrong.” I first booked an appointment with Angst after a weekend submerged in reviews and, after my cut, I happy-cried on the streetcar because my hair looked so good. This was my guy. I liked feeling I had figured something out by committing to him, like I’d checked something important off a list I don’t remember making.

Unlike the generally accepted belief of fashionable women that certain items of clothing are “investments” and worth spending real money on (and the worship of basics-oriented French-girl style and the increasing awareness of what is actually required to produce disposable fast fashion), there’s no consensus on tailored haircuts that last longer—though not that long—and cost more. Cuts actually demonstrate a weird cognitive dissonance in women willing to spend money on fashion—$300 on an on-trend sweatshirt with a half-season half-life or $3,000 on a “forever bag”—and unwilling to spend it on a very good haircut, which they’ll wear every day. Haircuts have no labels or obvious parentage and less street-level currency, even when they retain some insider cachet and dinner-party value. According to Matar, women “are not used to [putting] money into a hairdresser, because they still look at hairdressers [as] not part of the complete package.” Gibson says, more broadly, “There is something that can transform the way a woman feels when she gets a really good haircut, and sometimes it’s hard to measure. I see it all the time: When a woman sits down she’s one way, and when she leaves, she’s somebody else.”

Then there is the idea that we just want to be the woman who has great, expensive, exclusive hair, which is the kind of magical thinking that the pursuit of beauty can provoke. “I grew up on a farm,” says Angst, “and I was dying to meet girls who live in shacks and have really nice shoes to give themselves a thrill.” A thrill might be all it is, and that might be enough.