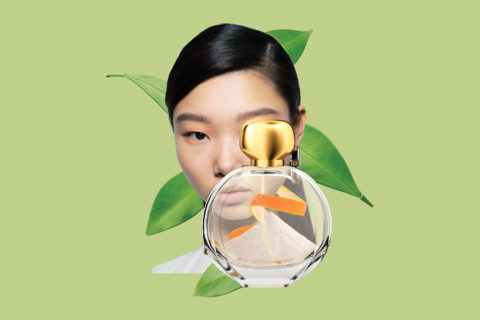 From Natural Perfume to Refillable Packaging, Here’s How Fragrances are Becoming Eco-Conscious

Thanks to a push from eco-conscious consumers, forward-thinking fragrance brands are exploring sustainable alternatives to the norm.

When Mugler created a new olfactive family with the debut of the gourmand scent Angel in 1992, it also pioneered what it calls “responsible luxury.” The scent’s elaborate faceted-glass star flacon can be topped up from a gleaming filling station called Mugler Fountain; Clarins, the brand’s former parent company, has claimed that a bottle of Angel is refilled somewhere in the world every 42 seconds, thereby saving more than two million bottles and boxes (or 383 tonnes of waste) each year.

Viktor Horsting and Rolf Snoeren take a kindred approach to perfume. Fragrance is just one pillar of their brand, Viktor & Rolf, and is of a piece with their other ongoing forays into sustainable design, like relying on their own dead-stock fabric for couture or the recently unveiled loungewear collaboration with Calida that is entirely compostable, from the packaging to the garments themselves.

It has been nearly a decade since Viktor & Rolf launched a refillable program (complete with in-store fountain dispenser) for its megahit Flowerbomb. “The idea of being able to keep this beautiful bottle as the jewel it is and being able to reuse it—it makes so much sense,” the pair recently expressed in an interview with FASHION. They admit, however, that the organization and execution are “an enormous operation logistically.”

“They’re doing it not because it’s the cool thing to do but because it’s becoming part of everyone’s DNA, especially with the younger generation.”

L’Oréal Paris began rolling out la recharge stations for Idôle at select Lancôme counters last summer. But in the face of increasing consumer demand, the question remains: How can sustainability practices go beyond refill options for a few major prestige and luxury pillars? What of the hundreds of scents that aren’t blockbusters?

“Perfume has to be stored in a certain way, and it’s not that easy,” says Simon Tooley, the founder of Etiket, a Montreal-based fragrance boutique and online shop. Multinational companies and the bigger perfume houses have scale and can afford refill stations, but small perfume brands must instead think “bigger picture,” explains Tooley. It’s upstart independents that are leading the charge with a more holistic approach to sustainable perfume, including packaging—like using minimal glue as well as vegetable inks and cartons from paper made of 100 per cent recycled fibres.

Take emerging perfume company Hermetica. Its refillable green cylinder bottles reflect the brand’s overall environmental commitment: The bottle glass is made of recycled local sand, and the packaging is recycled cardboard with no Cellophane wrapping. Hermetica’s alcohol-free compositions also feature molecules created from natural sources like food waste. Its Jade888, for example, has one derived from discarded orange skins. “They’re doing it not because it’s the cool thing to do but because it’s becoming part of everyone’s DNA, especially with the younger generation,” observes Tooley.

“The true niche-fragrance world has been supporting these practices for many years, before they were clickbait.”

Another natural brand with a low environmental impact is Abel, whose fragrances are so clean “you could practically drink them,” jokes Tooley. The aesthetic of Abel’s spare recyclable packaging speaks to this ethos, as does the branding, which is printed using non-toxic vegetable dyes.

“The true niche-fragrance world has been supporting these practices for many years, before they were clickbait,” notes Carlos Huber, founder of the fragrance brand Arquiste. Just as he prioritizes the quality and integrity of the juice by working with fragrance houses that source materials sustainably, he favours existing packaging solutions that are “simplified” and “unfussy.”

All this is the antithesis of typical custom bottles, perhaps with a decorative tassel, Swarovski crystal or glittery finish, that dominate the market and come in foil-stamped cartons or coffrets nestled in velour—all traditional signifiers of “luxury.” Over the past year, Tooley has seen a definitive consumer pushback. “I think we’re in a transition period of people saying they don’t want all that stuff,” he says. “But part of buying fragrance is still a bit of everything that goes with it. The newer, younger brands are much more aware of it because it’s the whole philosophy.”

“I think we’re in a transition period of people saying they don’t want all that stuff. But part of buying fragrance is still a bit of everything that goes with it.”

Given the European Union’s evolving guidelines on cosmetics formulas and packaging—like the new single-use plastics directive adopted by the European Parliament in March 2019—sustainability was the focus at the recent annual Luxe Pack trade show. Manufacturers featured scalable innovations, like chemical company Dow’s proprietary Surlyn plastic made of post-industrial materials, which has been adapted for use in perfume bottle caps. It’s a promising start. Like many other fashion and beauty systems forced into abrupt introspection by the COVID-19 pandemic slowdown, perfume industry incumbents are ripe for a reappraisal of best practices and values.