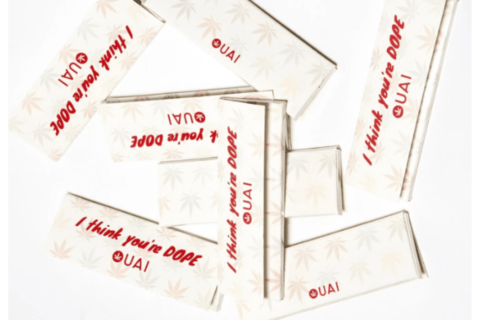 There's a reason for the inverted commas...

Jen Atkin’s haircare brand Ouai has just announced the launch of “blotting papers”. Why the inverted commas you ask? Well, the company is branding them as as blotting papers even though they’re technically more akin to rolling papers used for recreational smoking.

In a hilarious marketing activation, the papers (which sell for $9 for a packet of 40) feature the slogan, “I think you’re dope” with a revamped Ouai logo fitting the theme. On the website, the brand describes the papers saying, “To be perfectly blunt, you’re gonna lose your mind over these 100% natural hemp ‘blotting’ papers. Stash a pack in your pocket or purse and let the good times roll.”

You are who you roll with. ? Shop our new 100% natural hemp “blotting” papers now on theOUAI.com.

The launch was announced a few hours ago and the post already has over 10,000 likes and over 200 comments. Many of the brand’s loyal customers are praising it for the excellent use of puns (we have to agree) and product development. There was some confusion as to whether or not the papers could actually be used for blotting, with the brand responding to one customer’s query saying, “We won’t stop you!”

This isn’t the first time Ouai has delved into cannabis-related products, having announced the launch of a CBD-infused version of its hair and body scrub last year. However a few weeks later Atkin announced the product was no longer going to be released. In an Instagram statement she wrote, “We researched CBD months ago and saw it naturally calms inflammation and irritation. We decided to add it to a small special batch of our Scalp + Body Scrub. We’ve recently been told that as of a few weeks ago the FDA has decided to change the rules and put a ban on CBD being used in ‘food’ products. Because body scrub is a topical product it apparently falls under the ‘food’ category.” She also told Reason, “The lines are very blurry right now,” in regards to regulations surrounding CBD products. “Blotting papers”, on the other hand, have no such issues. Roll on.

Photograph courtesy of Ouai Haircare
Get the best of FASHION in your inbox Thanks for signing up!
The latest fashion, beauty and celeb news delivered right to your email #FASHIONforall Now, check your inbox to complete your subscription
We won’t ever use your email address for anything else
Want even more FASHION? Follow us on social media.