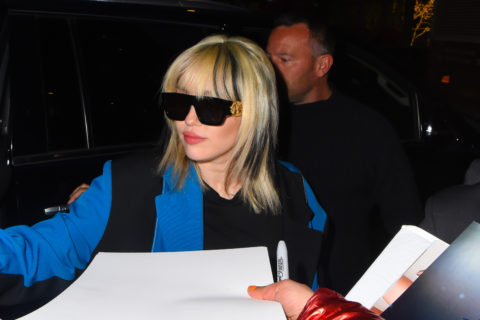 Pop Punk is the Latest Y2K Style Trend to Return

The singer has rocked a ’70s-style shag for some time now, but when pictured out in New York City last week to guest on The Tonight Show, she served a look reminiscent of Y2K pop punk.

A fresh take on the grunge cut, Cyrus added chunky black lowlights to her platinum blonde strands, and the internet quickly took notice.

when miley cyrus debuts a new hair style the world stops for a while. pic.twitter.com/9eLywavIM4

Since her rise to fame in the early 2000s, Cyrus’s hairstyles have reflected the different periods of her career — and the 29-year-old has been known to experiment with her locks. She did, after all, get her big break as the star of Disney’s Hannah Montana, a sitcom in which Cyrus played Miley Stewart, a regular (brunette) high school girl leading a double life as world-famous rockstar in a blonde wig.

The edgy look could not be more fitting for Cyrus’s current, real-life rockstar era, and is reminiscent of Y2K pop punk fashion figures like Avril Lavigne, who reliably donned this hairstyle in the early aughts — so much so that it became synonymous with her pop punk music. Christina Aguilera‘s take on the chunky highlights has lived on through the years thanks to well-documented red carpet appearances of the Y2K style icon dating back to 2000.

i think we can all agree that y2k christina aguilera. pic.twitter.com/zoP5tL5QXr

But Y2K may be too broad of a term for this style, with some TikTok users drawing comparisons to “scene girl” subculture. The aesthetic, which i-D reported was repped by Avril Lavigne in 2004, was popularized on MySpace in a pre-Twitter world.

Scene girl style consisted of bright and alternative fashion statements. Hair was flat ironed, often teased at the top and dyed with contrasting colours, like black or blonde.

The pop punk trend is no doubt making a comeback, and who better to lead its revival than hair trendsetter extraordinaire Miley Cyrus? The “Prisoner” singer has been sporting variations of her platinum blonde mullet and shag since 2019, and it’s fair to say she’s sparked a revival.

Choppy, textured hairstyles were big in the 1970s, and now many celebs have supported the look’s comeback. In March, Halsey went full 2000s goth when they rocked a shag with layered red strands. Billie Eilish chopped her platinum hair to create a retro shag in August.

According to Pinterest’s trend forecast, the mullet’s popularity will only continue to grow in 2022, especially among Gen Z.

Miley Cyrus’s new style confirms that the era of the two-toned shag is upon us. It’s no longer a question of if we’re in the age of Y2K beauty, but rather, what trend will come back next?

In the meantime, bring on the skunk hair.