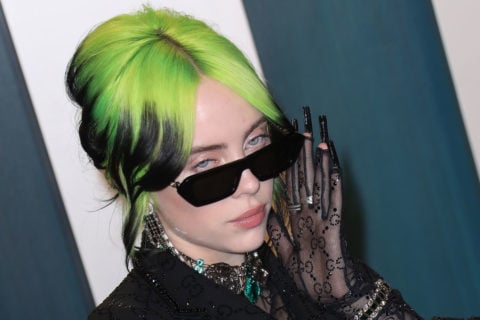 We've compiled a list of the artist's dramatic hair looks since her rise to stardom, including her latest mega-transformation.

Experimentation has always been part of Billie Eilish’s style. And clearly, one of her favourite ways to switch up her appearance is through her ever-changing hair. On August 23, the artist shared with her 89.6 million Instagram followers that she had, yet again, transformed her locks. Via an Instagram video, Eilish revealed that she had traded in her bombshell blonde blowout for a short, shaggy bob. She shared that the layered cut was inspired by her mom, who sported a similar hairdo in her earlier years. We’re obsessed, obviously.

With every dramatic hair transformation, Eilish seems to step into a new era of her musical artistry and personal style. From black to slime green to platinum blonde, the 19-year-old star is constantly upping the ante with her hair looks. Below, we’ve compiled a timeline of Eilish’s hair evolution through the years.

Eilish’s rise to stardom began when her 2016 song, “Ocean Eyes,” went viral. In 2017, she released her first EP, Don’t Smile at Me, sporting long silver locks on the cover. The silver-gray strands soon became synonymous with this early Eilish era.

In 2018, the singer injected her signature silver hair with a faded lavender hue.

The star has sported many iterations of this colour, from a deep ocean blue to a more faded navy with subtle hues of black and green.

Further demonstrating the versatility of blue, Eilish has sported a rich teal colour contrasted with darker roots. One of our fave looks, for sure.

Eilish sported jet black hair in 2019, aligning with the release of her debut studio album, When We All Fall Asleep Where Do We Go?, which featured darker and more gloomy visuals than her previous work. From pale lavender to jet black, Eilish can clearly pull off any shade. The range!

Debuted in 2019, this unique look arguably became Eilish most famous hair look. The eye-catching slime green roots garnered countless headlines and even influenced a new era of embracing the once unwanted root.

In the midst of her green roots era, she took a brief break from to show off a more natural warm brown hairdo, which she wore in the self-directed music video for her song xanny in 2019.

The 19-year-old nearly broke the internet in May 2021 when she posted her new platinum blonde hair on Instagram. The look was indicative of a new era for Eilish, coinciding with the release of her studio album Happier Than Ever. Sporting her bleach blonde hair, Eilish covered British Vogue in a corset dress and latex stockings, seemingly shedding her androgynous style and opting for a more traditionally femme look.

Debuted on August 23, Eilish is embracing a decidedly more grunge vibe with this cut. The look also has a bit of a 1970s shag vibe — which Miley Cyrus has also been repping as of late.

We can’t help but wonder: With this dramatic chop, what era is next for Billie Eilish?