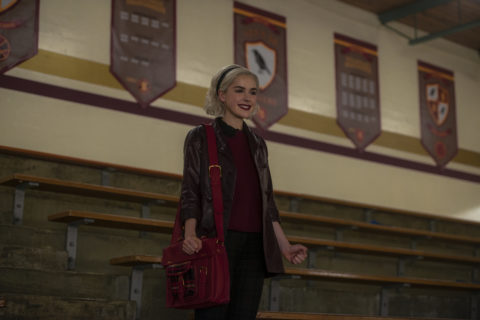 From black lipsticks to sharp brows, every beauty decision is in aid of emphasizing the characters

As the makeup department head for The Chilling Adventures of Sabrina, Candice Stafford-Bridge’s duties in the trailer run the gamut. Some days she’s applying a distinctive mark called the Devil’s Claw (“his physical manifestation of his grip on your soul”) to the skin of affected witches and warlocks, on others, she’s dolling them up for the high school sweethearts dance or a racy pagan feast.

Based on the Archie comic, developed by Riverdale’s Robert Aguirre-Sacasa, and filmed in Vancouver,  Netflix’s hit supernatural horror drama calls upon a variety of references. “There’s so much that we sample from on the show; it’s like a Picasso when we put all of it together!” says Stafford-Bridge. Yet the goal for the characters is ultimately a timeless quality. “We always want the women to look beautiful, but besides the Weird Sisters, none of them sit in front of a mirror for twelve hours,” she says. “They look how they look. We don’t want them to come across as trendy.”

The B.C. native’s credits range from The Flash and The A-Team to 80s throwback Hot Tub Time Machine and says she draws on everything from her vintage Vogue collection to her ‘old-school’ special effects skills as a graduate of the Blanche Macdonald makeup school for both the glam and the damned. “And there’s no little [makeup] bags on our show,” she adds, referring to the sheer volume of premium cosmetics chosen for each character’s signature style. “We us a lot of Bite Beauty, Make Up For Ever, Charlotte Tilbury, ILIA and Tom Ford.”

In the gallery below, Stafford-Bridges explains the meaning behind character makeup choices, and why a good skin care ritual is as important as demonic rituals. 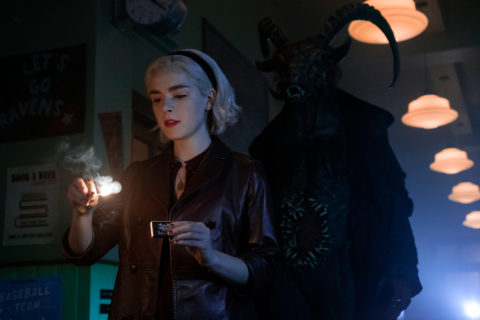 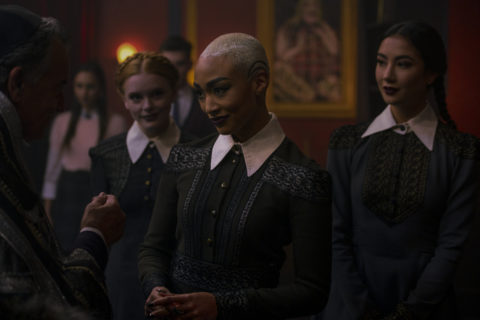 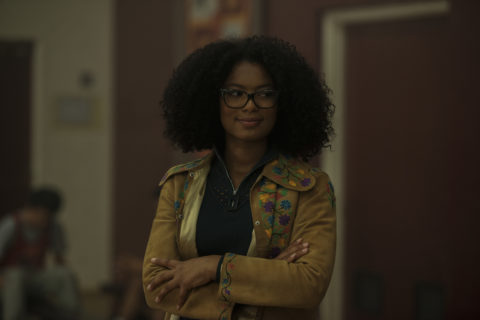 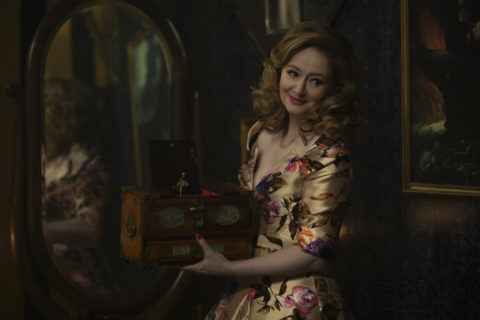 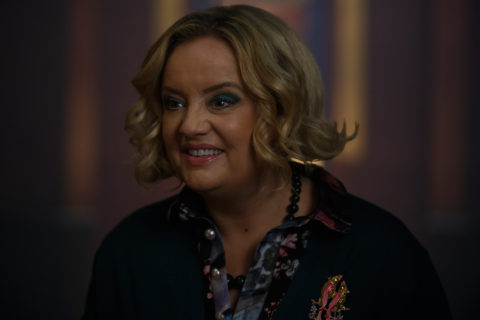 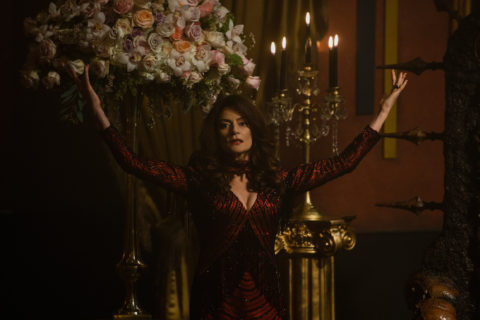 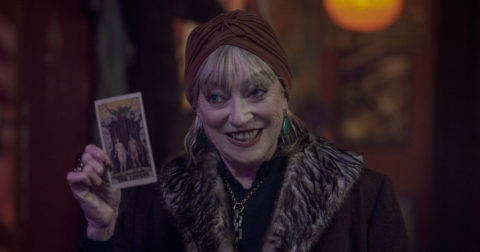 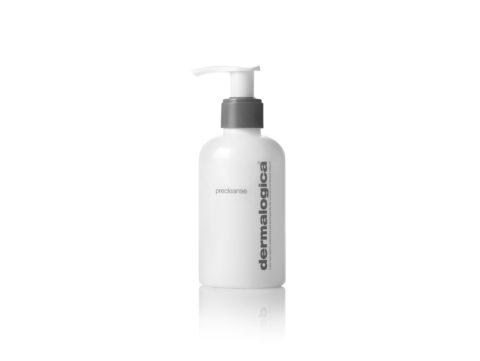 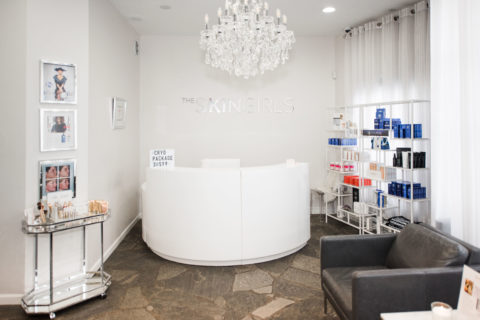 The titular half mortal, half witch of the series still straddles two worlds, between the path of light at Baxter High with her friends and studying the path of night at the The Academy of Unseen Arts. “Sabrina goes on a bit of a journey and starts honing her powers, exploring what is the darker side of witchcraft,” says Stafford-Bridge. “Because she’s 16 in the show and is still in high school, we didn’t get too crazy with the makeup.” The inner shift is signaled through intense lipsticks like Christian Louboutin Velvet Matte Lip Colour in ‘Very Privé’. “We went darker because that’s still something a 16-year-old would attempt herself.” It’s all the more dramatic now that she’s signed her name in the Book of the Beast in Part 2 and her hair has gone from blonde to the signature ash white of her comic book character. Since she’s often pulled in opposite directions, so is her beauty look and she still has an angelic glow: “I use MAC Eyeshadow in ‘Shroom’ on her lids—it has a bit of a kick to it. And then in the inner corner and underneath, an light cream Anastasia Bevely Hills highlighting pencil. That white light is also somewhat virginal and true to the mortal side of her.”

Based on the Instagram queries alone (through @candices), the Weird Sisters’ intense looks are the show’s breakout beauty hit. “We get to go outside the box,” says Stafford-Bridge. Think grey black, blue and purple lipsticks in ombré effects using layers of shades like Bite Beauty Amuse Bouche in “Squid Ink” and “black on their eyelids all the way up to their brows. Their looks are high maintenance. You couldn’t do that and walk around during the day. They even have a ‘bedtime look’. We call it a no-makeup look that’s the day version with nudes and browns.”

Think mortal, think minimal. “I’m not a fan of the sixteen-year-olds that look like Kardashians, and her character specifically is reaching out to girls who don’t just look like a cutout Barbie doll. She’s a mortal, she has friends and a great life, she’s not all about her looks. Because she wears glasses, we wanted to make sure the eyes still stood out no matter what. She gets lashes, and I put one of Anastasia Beverly Hills’ contour colours in orange on her eyelid to pop her eyes, because they’re brown, to keep with her natural skin tone. And then a berry lip, very lightly, with Chapstick over top.”

“We use a lot of the Charlotte Tilbury Hollywood Flawless Filter on the cheekbones of all our ladies. That little tiny bit of glow is useful.” The concept for Miranda was the throwback Hollywood noir of L.A. Confidential and Kim Basinger, “with the beautiful, loose hair that’s always perfect and just enough makeup. It’s all about business with Zelda. Her clothing is tailored, it’s never relaxed. She’s always put together.” No spoilers, but when in one episode her character goes through a personality change it’s reflected with softer and pinker makeup.

In contrast to her sister, Hilda wears pink lipgloss and matte baby blue Make Up For Ever eyeshadow with her flip hairdo. “That was a look on young Goldie Hawn in Laugh-In, because her character embodies that lightness, that laugh, that fun. It’s like the 1960s was her heyday, so she still looks like that and doesn’t care what anybody else around her thinks.”

Stafford-Bridge devotes significant time to brows, especially with Gomez. “They have to be perfect—she’s essentially the devil in disguise so they have to be sharp and bold without looking drawn on with a Sharpie! The arch is intense. I fill them in with a pomade so they’re stronger.” Tom Ford’s eyeliner pen is her favourite. “It’s the blackest, black black and you don’t have to be a makeup artist to get it right.” As for Madam Satan’s lipstick, Stafford-Bridge has tried everything, including NARS, Make Up For Ever, MAC. She finally settled on Charlotte Tilbury, alternating between ‘Red Carpet Red’ or ‘So Marilyn’. “She puts it on 24/7. The great thing about Tilbury’s lipstick packaging is that it doesn’t have her name all over it so they use it on camera all the time. I buy two or three and she’ll have one in her pocket to reapply.”

Lighting Can Be Magic

Part 2 is now streaming and once again features a variety of beauty looks to inspire every generation. “In genre, you usually get a colourful palette but you don’t usually get an age range,” Stafford-Bridge says of the diverse cast. “We’ve got men, women, non-binary who don’t conform to gender. I think our producers and our casting have been really forward in making sure that that continues, even with the guests.” Like the mysterious sexagenarian fortune teller played by Veronica Cartwright (Alfred Hitchcock’s The Birds, Alien). “We’re not trying to hide anybody’s age either—we’re not taping anybody up under the hair or anything like that,” Stafford-Bridge adds, and to make sure everybody looks good she works closely with the camera and lighting departments. “I’m a pretty vocal person and for scenes with many of our lead characters, I’m literally sitting on the lap of the DP asking, ‘Please put more light in and put more bounce in, for the love of Satan help a girl out.’”

The makeup trailer uses wipes from Bioderma and the Honest Company on Shipka, but the Weird Sisters use all of the removers. “A big one is the PreCleanse oil and balm from Dermalogica,” says Stafford-Bridge. “Because their makeup is so dark, we have to start with an oil. Then hot towels, then cleanser, and then always, always my staple, Lancôme Bi-Facil eye makeup remover. I’m pretty sure my Grandma had that stuff and I’ve never found anything that works quite as simply and quickly and easily and it’s available everywhere.”

When It Comes To Skin The Best Rituals Are Good, Not Evil

“Working 12-16 hours a day, five days a week, I make sure our cast has great skin care. It reduces some of the work we need to do with concealers and corrective makeup, which let me tell you, after ten months [of shooting], if it means they can spend five or ten minutes less in the makeup trailer every day, they do it! Facials are a really important thing and I send them to The Skin Girls in Vancouver for microderm, the laser light, and an oxygen facial to make sure their skin is in good shape. The men too. We also use a lot of SKYN Iceland products, especially their Hydro Cool Firming Eye Gel patches on everyone in the morning. I even put it on some of the producers!”