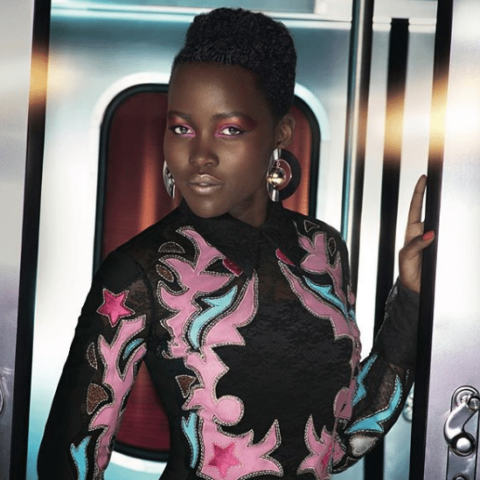 Lupita Nyong’o on Shadeism, Experimentation, and Her Role in the Beauty Industry

“I feel embraced by the beauty world. Like I’m relevant in a way that’s very humbling. I’m very excited to have a seat at the table.”

Lupita Nyong’o is perched on a velvet couch in the lush penthouse suite of New York City’s Gramercy Park Hotel. It’s a miserably wet, grey September day, but Nyong’o is wearing a neon orange crop top and bright red lipstick. “I like vibrant colours,” she says. “I like life in colour. I don’t know what it’s like to gravitate toward neutrals.”

The Brooklyn-based actress is in Manhattan on behalf of Lancôme, who made her its first-ever black spokesmodel in 2014—the same year she won an Oscar, a Golden Globe and a Screen Actors Guild Award for Best Supporting Actress for her role in the film 12 Years a Slave. Since her involvement with Lancôme, the brand has added 22 shades to its Teint Idole Ultra Wear Foundation range, bringing it to an impressive 40.

“I remember a time when it was very hard to find my shade of foundation,” says Nyong’o, who adds that she and her makeup artist Nick Barose used to have to mix their own. “We don’t have to do that anymore. When you have the right foundation, you can play so much more freely with other makeup.”

Nyong’o expresses her love of playful beauty every time she walks the red carpet. Case in point: the metallic blue lipstick she wore to a Star Wars: The Force Awakens premiere in 2015. But make no mistake: She doesn’t consider herself the glam type, having once said that “to dress to the nines all the time is to have no life.”

Dressing up and wearing a full face of makeup is a time-consuming task that she can’t always be bothered with. “I like doing it, but it’s only made possible by doing the complete opposite as well,” she explains. “That feels like freedom to me: having a choice about how I look.”

Nyong’o radiates confidence now, but she has always been open about her struggles with self-esteem and shadeism as a dark-skinned black woman. And last fall she called out Grazia UK for Photoshopping her natural hair on the magazine’s cover, saying in an Instagram post, “I embrace my natural heritage, and despite having grown up thinking light skin and straight, silky hair were the standards of beauty, I now know that my dark skin and kinky, coily hair are beautiful, too.”

As I have made clear so often in the past with every fiber of my being, I embrace my natural heritage and despite having grown up thinking light skin and straight, silky hair were the standards of beauty, I now know that my dark skin and kinky, coily hair are beautiful too. Being featured on the cover of a magazine fulfills me as it is an opportunity to show other dark, kinky-haired people, and particularly our children, that they are beautiful just the way they are. I am disappointed that @graziauk invited me to be on their cover and then edited out and smoothed my hair to fit their notion of what beautiful hair looks like. Had I been consulted, I would have explained that I cannot support or condone the omission of what is my native heritage with the intention that they appreciate that there is still a very long way to go to combat the unconscious prejudice against black women's complexion, hair style and texture. #dtmh

She talks about herself and her role in the industry with a perfect balance of confidence and humility that only comes with true self-assurance. “I feel embraced by the beauty world,” she says. “Like I’m relevant in a way that’s very humbling. I’m very excited to have a seat at the table.”

Photography via instagram.com/lancomeofficial
Get the best of FASHION in your inbox Thanks for signing up!
The latest fashion, beauty and celeb news delivered right to your email #FASHIONforall Now, check your inbox to complete your subscription
We won’t ever use your email address for anything else
Want even more FASHION? Follow us on social media.