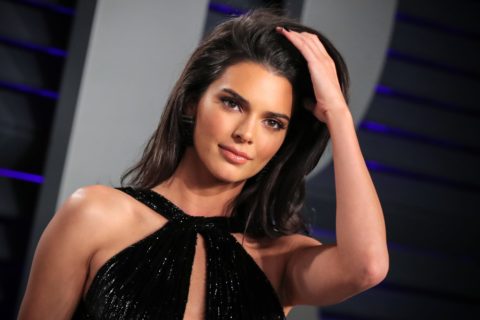 If you were following New York Fashion Week closely, you will have noticed that a particularly famous face was missing from all of the line-ups: Kendall Jenner. The model didn’t walk any shows in New York this season, although this isn’t anything new as she’s previously sat the majority of fashion week out, only appearing in select runways. Today, however, Jenner made her first S/S20 appearance at London Fashion Week  – albeit looking a little different since the last time we saw her.

Jenner appeared on the runway for Riccardo Tisci’s S/S20 collection presentation for Burberry today sporting dyed blonde hair. At first we thought it could be a wig (Kendall has been the least explorative with her hair colour in her famous family), however the dark roots suggest that Kendall may have gone all in for the show and actually dyed her hair for the occasion. The other evidence that suggests it might be a semi-permanent job is the fact that all the models on the runway had different hair colours – meaning she wasn’t obligated to change her hair to fit the show’s theme.

This isn’t the first time the keeping Up With The Kardashians star has flirted with lighter hair, having sported a wig for for the Fall 2016 Balmain runway show, and for her Halloween costume last year. Older sister Kim also famously dyed her hair platinum blonde in 2015 for her appearance at Paris Fashion Week – it lasted just 21 days however as she had to re-colour her roots every day. We suspect Kim would have warned Kendall of the potential damage and guaranteed upkeep such a dramatic colour change would entail, however perhaps Jenner got inspiration from friend Bella Hadid, who has recently also joined Team Blonde and decided to take the leap?

Whatever the reason (or path to the final product), we’re on board with the blonde.

Photo by Chelsea Lauren/Shutterstock
Get the best of FASHION in your inbox Thanks for signing up!
The latest fashion, beauty and celeb news delivered right to your email #FASHIONforall Now, check your inbox to complete your subscription
We won’t ever use your email address for anything else
Want even more FASHION? Follow us on social media.