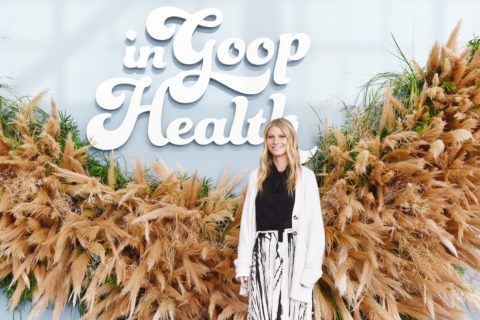 The 78 second-long video covers everything from exorcisms to orgasms and more...

Gwyneth Paltrow’s lifestyle brand Goop has been making headlines ever since it was established back in 2008 – whether thanks to its promotion of, ah, shall we say less-than-normal beauty practices to obnoxiously priced wellness items and big claims that drew criticism for their lack of scientific support, it’s always given people something to talk about. And it’s back in the spotlight again this week thanks to the release of the trailer for the new Goop documentary on Netflix.

Airing on January 24, the six-part series offers viewers a behind-the-scenes look at how Goop explores the weird and wonderful in the worlds of wellness and beauty. In true Goop style, the 78 second clip begins with Gwyneth asking a woman, “So what happens in a workshop?” to which she replies, “Everyone gets off.”

From there, the trailer includes clips of said class, as well as a Goop staffer receiving an exorcism, cold therapy, acupuncture facials, psychic mediums and the use of psychedelics. The trailer is a truly wild ride so we can only imagine what the full series – called The Goop Lab – will be like. During the clip, Elise Loehnen, the brand’s chief content officer, says, “What we try to do at Goop is explore ideas that may seem out there or too scary,” and it certainly looks like they’ve succeeded in doing just that.

It’s also clear from the clip that Paltrow has a genuine interest in testing out and learning more about these alternate treatments and experiences. “We’re here one time. One life. How can we really milk the shit out of this?” she says at the clip’s end.

"We’re here one time. One life. How can we really milk the sh*t out of this?" — GP. #ThegoopLab premieres January 24 on Netflix.

The trailer has already generated plenty of interest on Instagram, garnering almost 200,000 views in 24 hours. Be sure to set a reminder on January 24, because, as history has shown us, this is all anyone will be talking about the day after.

Photo by Ian Tuttle/Getty Images for goop
Get the best of FASHION in your inbox Thanks for signing up!
You’ll get the latest fashion, beauty and celeb news delivered right to your email Now, check your inbox to complete your subscription
We won’t ever use your email address for anything else
Want even more FASHION? Follow us on social media.