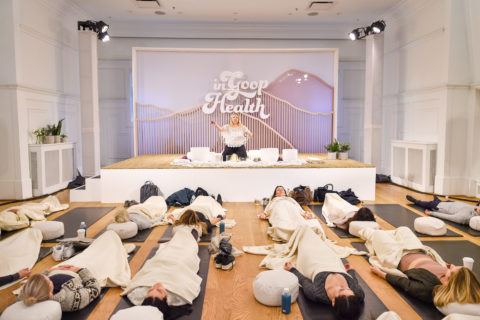 Hearing From The Dead, Gut Wisdom and Other Highlights From In Goop Health’s Vancouver Summit

If you weren’t one of the 200 people who snagged a $400 ticket to In goop Health’s first Canadian summit in Vancouver this past Saturday and you’re dying to know what went down, here’s the scoop (goop?). As someone who feels tepid about the whole Gwyneth Paltrow lifestyle universe—neither adoring or abhorring—I went in half curious and half cynical.

First off, Gwyneth didn’t show up, but there were plenty of other pretty blonde women who did. After receiving a string of Mala beads to denote my breakout session group and getting handed a glass of goop Glow (which for the uninitiated is a “morning skin superpowder”), that was the first thing I noticed walking into the goop Hall: the crowd was mostly white women.

In between panels and sessions, attendees could get a vitamin B12 injection and shop goop-approved products such as books, beauty products and fitness items. As someone who wears a size 10 pant, I noticed the rack of workout gear was mostly extra smalls and smalls—I wanted to believe that’s just because all the larges sold out between 8-8:30 a.m. before I got there, but that might be a stretch. There were, however, at least four copies of Taller, Slimmer, Younger: 21 Days to a Foam Roller Physique by Lauren Roxburgh available. Then there were the phrases overhead in the goop Hall: “Yeah, but it looked compostable,” and “I listen to the podcast,” and “Right now, my self-esteem is so low; I’m surrounded by superficial people.”

Following some breathwork and intention-setting to kick things off, chief content officer Elise Loehnen took to the stage and called upon the omnipotent herself (“Thank you Gwyneth, for watching over us”), acknowledged we were on traditional, unceded First Nations’ territory (refreshingly, goop did some site-specific homework) and got a feel for the crowd (“How many of you were dragged against your will? Are you worried we’ll force you to get a colonic?”). She also shared that In goop Health was born out of the question: “Can you change your life in a day?” It did not change my life, but here are some takeaways you can have for free:

• Hollywood psychotherapist Barry Michels made a lot of points using his own brand of nomenclature—Life Force, Part X, The Grateful Flow—from the book he co-authored with Dr. Phil Stutz, The Tools: Transform Your Problems Into Courage, Confidence, and Creativity. I didn’t figure out what all The Tools are, but one of them is being grateful.

• Facialist Anastasia Achilleos said if we massage while we cleanse and moisturize our faces daily, our beauty products will work better, we’ll support lymphatic drainage and release stress, and ultimately stuff will shift off our face. She spent 30 minutes demonstrating but there’s a truncated version on YouTube.

• Yoga in a heated clear plastic tent covered in fallen leaves on a cold day might be the best kind of yoga. Receiving a free pair of Lululemon pants immediately after doesn’t hurt either.

• During the Gut Wisdom panel, Dr. Alejandro Junger, LA-based cardiologist and author of Clean, admitted he doesn’t eat clean all the time (celebrity doctors, they’re just like us!), to which Vancouver-based registered dietician Karlene Karst suggested the 80/20 rule when it comes to healthy foods and guilty pleasures. Eating unprocessed foods isn’t always enough anyway—often gut issues, such as undiagnosed parasites, mean we can’t absorb nutrients (so, you know, if something feels off in your gut, there’s a good chance it is). Junger also burst the ketogenic diet bubble, saying, “Nobody really fully understands what’s going on, so easy on the keto diet in the long term.”

• Not everyone paid to be there. Psychic medium Susan Grau connected with deceased loved ones of some attendees. Those who’d passed over seemed to have only good things to say, no The Haunting of Hill House type stuff, thank goop.

• On the topic of anxiety, psychiatrist Ellen Vora first addresses her clients’ physical issues, such as low blood sugar, which she sees as the original stress (being hangry is no joke, guys). Psychoactives were also broadly discussed as a way to give the mind a fresh perspective, but psychological astrologer Jennifer Freed, who’s done some of them, advocated for it to be sacred and mediated, not recreational, saying “I’ve seen far too many people do this as another explosion of experience but not integrate it.” Don’t be surprised if goop-guided “trips” start becoming a thing.

• Discussing strength and beauty, 48-year-old former pro volleyball player Gabrielle Reece, who’s 6’3 and 180 pounds, wants you to know she has a harder time finding pants that fit than you. She’s also pretty sure she could take Gwyneth down just by leaning on her. For most things in life—training, marriage, aging—her advice is be willing to adapt.

Overall, nothing struck me as whacky or wildly off-base—my personal jury is still out on the psychic medium stuff though—but then again, I’m from the West Coast where yoga, crystals and the like are old news. I was exhausted by the end of the day, so I do think labeling the Lean Green Colada “super energizing” was super misleading.