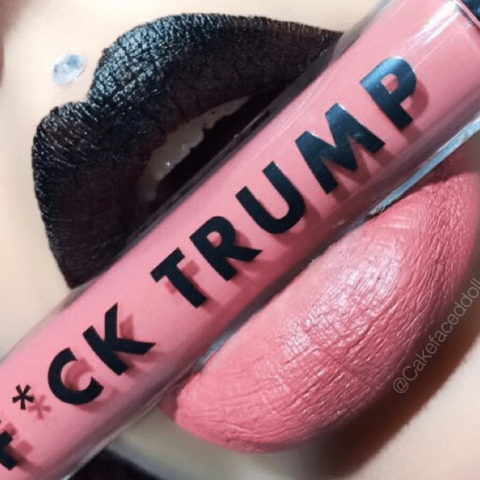 Ever since Donald Trump became President of the United States, many brands have taken a stance against POTUS for his racist, misogynistic, and xenophobic ways. And while the fashion world has been divided as to whether or not they should support Trump, the beauty world is becoming more and more vocal about their negative views towards the president.

Below, see a list of beauty brands who have taken a stance against President Trump:

When woke women create a great product that also sends an important message and helps an important cause, it’s a beautiful thing. So you can imagine how excited we got when we learned of lipstick brand launched by three college students in California that’s meant to empower women and raise a “middle finger to the current political landscape.”

The brand is cheekily called Lipslut and the $20 lipstick itself is called ‘F*ck Trump.’ It’s a mid-tone nude pink matte liquid lipstick that’s cruelty-free and “100% against tyranny.” Lipslut first launched shortly after President Donald Trump’s inauguration and allowed customers to select one of nine charities (including Planned Parenthood, She Should Run, the ACLU and the National Organization for Women) during checkout. Whichever charity received the most votes by the end of the initial F*ck Trump campaign would receive 50 per cent of all sales.

But after the horrific violence that went down in Charlottesville on August 12th, where a car ploughed through a group of activists counter-protesting neo-Nazi and white nationalist groups, killing 32-year-old Heather Heyer and injured 19 others, the Lipslut team decided to add Charlottesville as a charity option, with 100 per cent of the proceeds being donated to Charlottesville victims’ medical bills, BLM Charlottesville and the Albermarle-Charlottesville chapter of the National Association for the Advancement of Colored People.

“I was really disturbed and horrified to see that,” Katie Sones, Lipslut creator, told The Hollywood Reporter. “I just wanted to help however I could, and I thought this would be the perfect opportunity.”

Sones told THR Lipslut received roughly 450 new orders since announcing its plans to donate to Charlottesville. As of August 18th, they had already raised $40,000 for the cause.

Freedom of expression, equality & diversity. Join us & together, we can be the change we want to see #Illamafia: https://t.co/eKKjCnSGbF pic.twitter.com/uFTo8L56R7

British beauty brand Illamasqua made headlines in February when it declared it wouldn’t sell its products to Trump supporters. In an open letter, the brand wrote that in order to buy its products, customers would have to sign an anti-fascism pledge consisting of “Human Fundamentalism values” such as never discriminating against race, colour, nationality, ethnicity, gender, age, disability, sexual orientation or religion, accepting responsibility on challenging social and climate issues and speaking for those who cannot speak up for themselves.

“Illamasqua believe in the freedom of expression, equality and diversity. That’s why we are horrified by President Trump’s actions to date. We refuse to remain silent while extreme right-wing populism gains momentum… wherever it is happening,” said the brand. “So please, if you don’t agree with the above DON’T BUY US.”

#TGIF ? It wouldn't be a Friday night out without making a bold statement right? ? Step out to the last of your holiday parties in our #PantsuitPink #PoliticallyPout or #GlossCeiling ??

Another incentive to let your (beautifully painted) lips speak out: Beautiful Rights lipstick and lip gloss. The brand, which was also founded after Trump’s inauguration, donates 20 per cent of sales (not profits) from each of their lip products to one of five organizations (Planned Parenthood, Emily’s List the ACLU, Legal Momentum and Lambda Legal) which customers can choose upon checkout (the 20 per cent is meant to represent the fact that women in the U.S. overall continue to be paid 20 per cent less than men for the same work).

And of course, the lip product shades are aptly named: “Pantsuit Pink” and “Politically Pout” lipsticks ($24 each) and a “Gloss Ceiling” lip gloss ($24). All three can be purchased in a “Stronger Together” collection for $64.

I usually never go for a "healthy/clean" look but after @iamleah did my makeup for our upcoming @katvondbeauty Shade+Light créme contour tutorial, I may have to step out of my usual sickly/pale comfort zone. ? [products used: •Lock-It foundation •Shade+Light créme contour palette *coming soon! •Everlasting Liquid Lipstick in "Lolita"] ?sequin jumpsuit by: @lecoledesfemmes ? #KvDArtistryCollective

Kat Von D found herself into a bit of controversy in July for allegedly disqualified a Kat Von D Beauty contest winner after learning she was a Trump supporter.

The person in question was makeup artist Gypsy Freeman, who had won free makeup from Sephora and Kat Von D, as well as an all-expenses-paid trip to L.A. for Kat Von D’s Saint and Sinner perfume relaunch party thanks to her winning Saint and Sinner-inspired makeup look. However, Freeman told The Wichita Eagle that an Instagram she had posted showing support for Trump back in November got her disqualified from Kat’s Saint + Sinner contest. She claimed once Kat saw the post, she received a direct message from the makeup artist’s personal Instagram account, saying, “I did notice the pro-Trump post you posted awhile back and and just wanted to make sure you are aware that even though I don’t consider myself political, I definitely have drawn a personal line in the sand between myself and anyone who supports that man.”

The screenshots of the conversation, which Gypsy provided to The Wichita Eagle, also saw Von D writing, “My launch party [and my brand] celebrates many things that Trump is against. And I just need you to know that I personally have a hard time with inviting anyone who would support such an anti-feminist, anti-homosexual/LGBT, anti-immigrant, and anti-climate change fascist such as Trump.”

Freeman responded, “I understand. I am, however, not Trump…We would love to be there, of course, but I sincerely do understand if you decide to replace us with someone who supports the candidate you support.”

Soon after, any evidence of the contest disappeared from Kat’s personal and brand Instagram accounts. Von D later addressed the ordeal in the comments section of her on Instagram account, writing, “No one got disqualified, so calm down. I personally messaged her sharing MY personal feelings on the subject as to avoid her getting even more criticism than she already was receiving. She decided on her own to not come to my launch.”

She did, however, emphasize her right to set her own boundaries, writing, “If you want to explain to my mother who lives in Mexico why she should pay for a wall to be built, and why she should have to deal with the negativity that comes with such anti-Mexican statements as our president has made, feel free. If you want to explain to me why anyone should tell me what rights I have over my own body, feel free. If you want to promote someone who is anti-immigrant, anti-LGBT, anti-women, and denies climate change — feel free.”