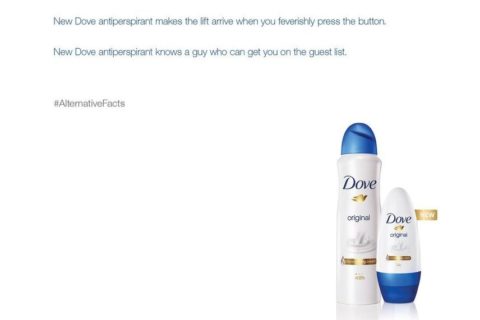 While the fashion world has been vocally divided as to whether or not they should show support for U.S. President Donald Trump, the beauty world has remained rather mum on the topic.

But now, one major beauty brand is speaking out against Trump in a clever, indirect way.

This past weekend, Dove placed a two-page ad, created by Ogilvy London, in various U.K. newspapers, offering #AlternativeFacts about its new antiperspirant. By making false claims such as “New Dove antiperspirant increases your IQ by 40 points” and “New Dove antiperspirant boosts your Wi-Fi signal,” the ad pokes fun at the phrase used by White House senior adviser Kellyanne Conway without actually mentioning her or Trump.

The second page of the ad shows an image of the product and the message, “New Dove antiperspirant cares for your skin like never before,” with the hashtag #RealFacts.

“Brands live in a world of accountability. And that’s a good thing,” Tham said in an email message to PR Week. “To see one respond so swiftly with an #AlternativeFact moment, done gently and with a smile, reminds us of that.”

As AdWeek notes, this isn’t the first time Unilever (Dove’s parent company) has criticized President Trump through its brands. And while this has mostly been done through U.K.-based brands, Ben and Jerry’s Twitter account has been very vocal about its opposing views to POTUS.

So will other beauty brands, particularly in the U.S. or Canada follow suit? Time will tell, but we’ll be keeping our eyes peeled.