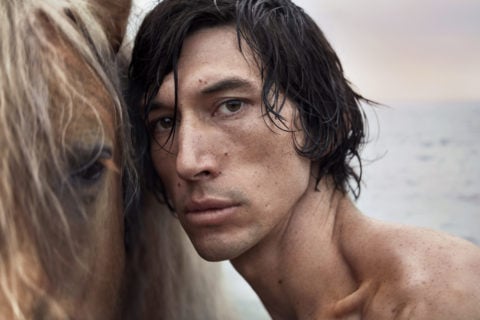 Adam Driver on Stepping Outside of the Box

The Oscar nominee and Burberry ambassador is all about finding new ways of expressing yourself — no matter your profession.

“Typically when people ask me to do something that I have no relationship to, I’m always more interested in it,” says Adam Driver over Zoom. The Star Wars and House Of Gucci actor is talking about starring in Burberry’s campaign for its fragrance, Hero, a woody-meets-spicy eau de toilette with bergamot, pepper, juniper and cedar that launched last year. “Being the face of a fragrance is never something I had plans to be involved with, especially since scent has never been part of my routine.” The ad, which sees the actor strip down and swim with a horse to FKA Twigs’ “Two Weeks,” captured the attention of the Internet upon its release. It cemented, once again, the Academy Award nominee’s position (and hotness, let’s be real) as a multi-talented leading man.

Earlier this fall, when Burberry dropped a more intense version of the spritz, Hero Eau de Parfum (think notes of pine needles, incense and cedar), FASHION had the opportunity to chat with Driver, who’s currently on location in Italy. Between filming scenes for a big-budget biopic of racing mogul Enzo Ferrari (the first images of the upcoming film just surfaced this week), he spoke about his idols and how he gets into character. He also delved into his passion project, Arts in the Armed Forces, a non-profit bringing arts programming to the U.S. military community around the globe, free of charge. Interesting fact: Driver was a former Marine himself before going off to study theatre at Juilliard.

“I have a memory of Brut when I was, like, four. I don’t even know if that’s still around! I also have memories of my mom gifting me a bottle of Stetson cologne for Christmas and I would just keep getting the same bottle of Stetson.”

“I don’t have a singular hero. There have been many people throughout different times in my life. More recently, I would say the parents of the Uvalde, Texas school shooting. To lose your kid and get up the next day is a heroic act. That requires a will that I think is really impressive.”

“New York. It has an energy and a pulse that, even if you’re indoors, you can feel.”

On getting into character:

“Sometimes you don’t find your character until you’re already a week into shooting. Sometimes it happens in your first costume fitting or you can read a script and right away you understand who your character is and what you want to do with them. It really depends. Clothes, which physically tell a character’s story, play a huge part — especially shoes. Shoes to me represent how someone chooses to move around in the world.”

On Arts in the Armed Forces:

A post shared by Arts in the Armed Forces (@aitaf)

“The idea was to bring the power of live theatre to an audience that’s been told that they won’t understand a play or that that theatre is not for them. Service members are regular people who just have this crazy job. Less than 1 per cent of the United States is in the military, so the disconnect between our military community and the civilian community is the biggest it’s ever been in history. People really don’t know what others are doing. Civilians look at the military as these, like, Neanderthals who just follow orders and don’t question anything. But they’re really these incredible people who like to be artistically fed and inspired, just like anybody else. That’s basically what we do.

“We go to bases and first train with troops, whether that be going up in Blackhawks with them or watching their water training or attack dog training. Then after they watch us read a play and we have a conversation about it. We also do film screenings. Military bases reach out to us all the time and we have a $10,000 grant for a screenwriting and playwriting award for any military or veteran to write a play about anything that’s been going on in the world. Arts in the Armed Forces is exposing troops to a new way of expressing themselves, similar to what I went through after leaving the Marine Corps and going to Juilliard. I was able to articulate feelings that I had while in the Marine Corps through plays that had nothing to do with the military.

“This isn’t a new idea, it’s an ancient one: In ancient Greek theatre, Aeschylus, Sophocles and Euripides were elected generals and playwrights who wrote plays for an audience of people who were in the military. We’re kind of doing a modern-day version of that.”

Photography courtesy of Burberry
Get the best of FASHION in your inbox Thanks for signing up!
The latest fashion, beauty and celeb news delivered right to your email #FASHIONforall Now, check your inbox to complete your subscription
We won’t ever use your email address for anything else
Want even more FASHION? Follow us on social media.