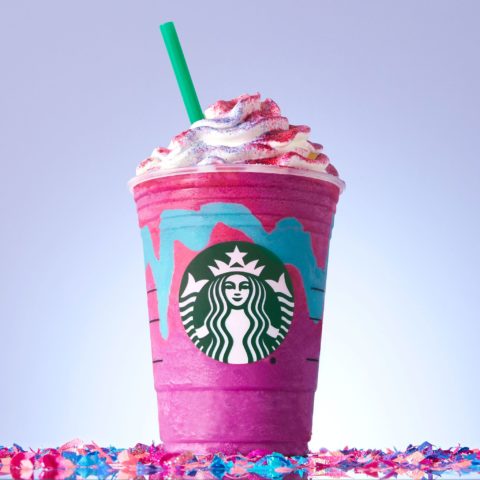 A Unicorn Frappuccino is Coming to a Starbucks Near You

After many failed attempts at ordering a hacked version via Starbucks’ infamous secret menu (and driving baristas crazy), the coffee giant has decided to jump the shark on Instagram’s latest food trend. World, meet the Unicorn Frappuccino blended beverage.

There’s no word on what the actual ingredients are in this enchanting drink, but according to a press release, each rainbow beverage “comes with a bit of magic,” whatever that means. The purple-based drink is first swirled with a sweet and fruity blue colour and then topped with vanilla whipped cream and sweet pink and sour blue candy topping. With just a stir, the colour will allegedly will change to pink. The more you swirl, the more the colour (and flavour!) transforms. Sounds magical, doesn’t it? While the mysterious taste and transformation does raise eyebrows, the Unicorn Frappuccino sounds like what our childhood dreams are made of.

Upon hearing the news, Starbucks’ fans are already freaking out on Twitter. Per usual.

I may work at a rival coffee shop, but @Starbucks new #UnicornFrappuccino got me swooning!

So let me get this right on 4/19 starbucks is releasing a #UnicornFrappuccino that changes flavors? Im in love already?GIMMIE GIMMIE GIMMIE! pic.twitter.com/MVLDi3qUub

This could really be the best part of waking up. ? https://t.co/PkLYQAamRO

Best way to get me to buy your product? Name it after unicorns. ? You better believe I'm getting this Frappuccino. https://t.co/SkhEOqlhlF

The magical drink will be available April 19. But hurry! Like the mystical creature itself, Starbucks’ Unicorn Frappuccino is here for a limited time only (Sunday April 23, to be exact) and while supplies last.

Photography courtesy of Starbucks
Get the best of FASHION in your inbox Thanks for signing up!
The latest fashion, beauty and celeb news delivered right to your email #FASHIONforall Now, check your inbox to complete your subscription
We won’t ever use your email address for anything else
Want even more FASHION? Follow us on social media.