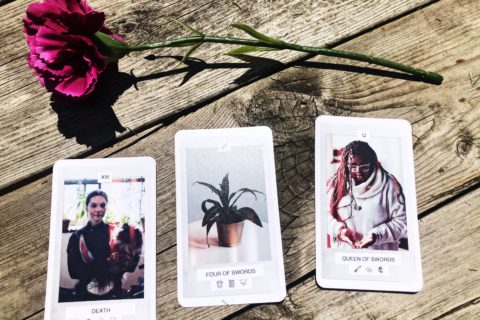 This Tarot Deck Celebrates Some of Toronto’s Most Powerful Women

“You’re going to feel really powerful energy through the deck,” says the creator.

Names like Lisa Berry, Maika Harper and Temi Shobowale may not be familiar to you, but we guarantee you’ll want to know more after perusing the brilliant WOM_NTO tarot deck.

The brainchild of Toronto-based creatives Nataleigh Ballantyne, Louise Mangalino and Ally Pratt, the deck is inspired by “Toronto and the elemental energy of wom_n doing amazing work in our city.”

ATTN, ATTN! Another good thing to announce ??? Our instructional guide for the tarot deck is complete and will be sent out to everyone who has purchased a copy! Stay tuned in your email inboxes for a digital booklet to help you with understanding how to read the cards (symbols included!), introduce you to the amazing wom_n + businesses featured, learn more about the charities we are donating to and finally, a lil message from the WOM_N team ✨ Here’s a quick sneak peak of what you can expect to see in the instructional guide — can you spot yourself?! #wom_nto

Despite the number of women’s empowerment panels going on in the city, Ballantyne longed for a celebration of women that was “more tangible than a one-off event.” She settled on a tarot deck because of the spiritual element that tarot decks contain. “People go to tarot for clarity or affirmation on something they’re looking for,” she says.

The deck features a “diverse, inclusive, and eccentric” array of women, such as Baroness Von Sketch comedian Aurora Browne as “The Fool,” founder of healthcare startup Dot Health Huda Idrees as “The Hermit,” and tattoo artist Lizzie Renaud as the “Death card.” Each woman featured in the deck had a special reading with Pratt to determine which card they would inhabit, then Ballantyne took their photo so the full embodiment of their energy was on display.

“We really wanted to stay away from only people you would see on a ‘Top 30 under 30’ list,” Ballantyne says. “There’s no limit on what your timeline or accomplishments can be.”

Different tarot decks inhabit different realms of energy, and the predominant energy this tarot deck put out is “powerful,” according to Ballantyne. “You’re definitely going to be inspired and motivated and [we hope] you see a part of yourself in this deck.”

The first run of decks sold out, but WOM_NTO are currently taking pre-orders on a second batch. All orders placed by July 26th will be shipped mid-August.

Now, who’s ready to get a reading done?

Photography Courtesy of WOM_NTO
Get the best of FASHION in your inbox Thanks for signing up!
The latest fashion, beauty and celeb news delivered right to your email #FASHIONforall Now, check your inbox to complete your subscription
We won’t ever use your email address for anything else
Want even more FASHION? Follow us on social media.