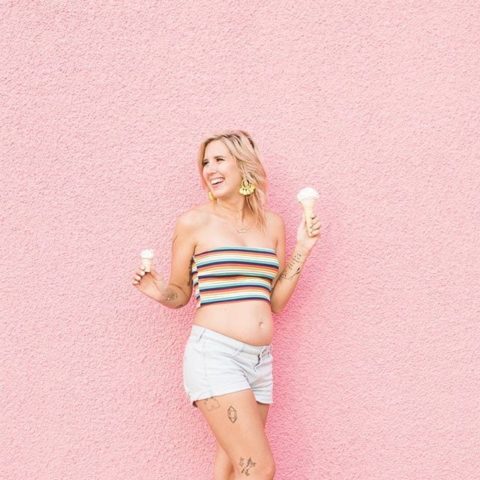 "We live in a world where women can do anything, so why is the narrative surrounding pregnancy, birth, and motherhood so out of date?"

After deciding to stop waiting around for a “Prince Charming” to have babies with, Alyssa Garrison of Random Acts of Pastel, (RAOP), is using her platform to share her non-traditional pregnancy story and start a conversation about why in today’s society, there’s no reason a single-parent family using alternate methods to conceive should be less accepted than a nuclear one.

SURPRISE – pastel baby coming February 2019! ? I can’t explain how many times I’ve dreamed of this moment and it’s SO surreal that it’s finally here. I’ve wanted to be a mom more than anything for as long as I can remember, and when I turned 27 last August I decided enough was enough – why was I letting the search for a perfect prince dictate the timeline for my happily ever after? I spoke to my doctor, found a donor, and went for it. I’m sure you guys have LOTS of questions and I’m excited to share this journey with you, opening up a different dialogue about motherhood and what mommy blogging can look like, but for today I’m just going to soak up the baby bliss. We made it to the second trimester after all! Oh and why the peach? This week baby is a lil’ ?! Can’t wait till we’re at full on ? status ? Photo by the amazing @ainsley_rose ✨ #apastelbaby #raoprealtalk #pregnancyannouncement #14weekspregnant #singleparenting

First off, congratulations on your pregnancy. How does it feel to be mother?

Thank you so much! The first word that comes to mind is just bliss. I struggled for years with this overwhelming anxiety, the kind that sits on your chest when you wake up in the morning and follows you around until you go back to sleep. Nothing seemed to shake the nagging feeling that something really important to me was missing. As soon as I got that positive test I experienced such a massive wave of relief.

Can you explain how you planned to get pregnant?

I made the decision to start trying on Christmas eve. My gift to myself this year was to finally chase this dream. First I spoke to my doctor about my plan and had basic ovulation/egg supply testing. When everything came back healthy she referred me to a fertility clinic but we also discussed other methods, like known donors, or meeting a donor through free sites like CoParents.com. I went the known donor route. For me, it felt strange to make such a massive decision based on an online bio. I wanted to be able to know I connect with the person on some level, and I was lucky to have a lot of men in my life that had confidence in me as a mother and wanted to help.The first month I only inseminated the one day I thought I was ovulating and it didn’t take. I went to see my doctor and she reminded me that couples using intercourse to get pregnant are usually trying everyday, not once a month. After that, I had my donor commit to daily drop offs for the whole week I was ovulating. I got a positive test result in the third month of trying. I tested earlier than I should have and wasn’t expecting anything conclusive, so it was the best surprise of my life!

First off, THANK YOU. ALL. SO MUCH. Posting my little baby belly yesterday was exciting but also so scary and you guys made me cry happy tears ALL DAY LONG with your support. It seriously means the world to me. THAT SAID I’m sure there are a lot of questions, like HOW?? and WHEN?? and maybe even BUT WHY THOUGH?!? So I’m sharing the whole story today on @flaremag’s site (link in my profile). I know this pregnancy story is a little different than most, and I want to be as open as I can throughout this journey. When I was planning this adventure it was almost impossible to find stories like mine, and I want to change that – it’s about time we mixed up the existing mommy blog dialogue that’s out there! SO if the story today missed anything *please* send me a DM and I’ll try to have all questions answered on my blog by end of week! ✨?? #apastelbaby #raoprealtalk #pregnancyannouncement #14weekspregnant #singleparenting

You’ve gone through a couple of breakups that you shared with your followers. How did it feel telling them that you’re going to be a single parent?

It was extremely liberating. I think my followers have been waiting for my happily ever to work itself out for years, but most people probably assumed that would look like me finding the right man to settle down with. It was terrifying, but also really exciting to shake up that narrative, to come out and say well actually, I’m done waiting for “the one” to swoop in and make all my dreams come true. A Prince Charming can catch up somewhere down the line if he wants in.

When your child asks you about how they were conceived one day, have you thought about what you’ll say?

I plan to say something like this: “Your mom wanted you so, so much, and she dreamed about you for years. But, just like baking a cake in an oven, she needed to gather a lot of special ingredients to get you baking in her belly. Over the years she gathered lots of love and magic, but there was still one ingredient missing, so she had to ask to borrow it from a friend. With the help of that ingredient, she put the batter into her tummy and made a special wish for you.” It can’t hurt to start them off with some whimsy, right?

✨Mothers are Magic✨ I’ve had such an amazing long weekend – no, I didn’t get to go on a road trip or hang at a cottage, but I did spend my time on people and things that make me feel ~strong and happy~. From my first massage appointment at @westendmamasto (the BEST) and a @soulcycle date with my doula @birthbossco, to a Sex and The City sleepover and the best real talk chats with my new mom pal @aminahhaghighi of @unapparenthood (ps. My podcast episode with her is live and I’m super proud of it), I really prioritized self care on MY own terms. I think feeling HAPPY is one of the best things you can do when you have a baby on board, and I’m learning for me that looks more like a busy long weekend of adventures than a face mask in the bath… and that’s ok! Moms come in all shapes and sizes, and regardless of how we get our kicks, we’re all blessed with a little bit of magic ✨? #mothersaremagic #momblog #bumpstyle #18weeks #sheingals #vansgirls #beeandmae #torontomom

You’ve faced criticism too. How have you been dealing with your critics?

I was pretty prepared for the worst possible reactions when I decided to make my announcement a public point of conversation. I knew my audience on Instagram would be predominately supportive, but I also knew my story had the potential to be shared and debated on other platforms too. Yes, it’s hard to hear the criticism, but I’m also appreciative of it at this point. It has only helped me feel stronger and more confident in defending my decision.

How do you feel about challenging society’s idea of the nuclear family?

I feel like it’s about time. We live in a world where women can do anything, so why is the narrative surrounding pregnancy, birth, and motherhood so out of date? Modern families come in all sorts of different shapes and sizes, and it’s amazing how many women have messaged to tell me that they’re on the same path I am.

In which ways do you think the stereotype of the single parent needs to change?

I think we need to be more honest about how hard motherhood is always, not just if you’re on your own. The single mom narrative is so often portrayed as a sad story. Personally, I don’t think being alone has to be a bad thing as a mother any more than it has to be in normal daily life. I think it’s really important to acknowledge that together isn’t always better when it comes having a baby. Being a single mom is not the end of your happily ever after, it’s almost always just the beginning.

Does DNA make a family? ?‍?‍?‍?? I have received so much positive feedback since sharing my pregnancy story last week, but I knew by being so open I was also opening myself up to criticism and negativity. Some of the comments were just plain rude/silly (ie. “What… an… idiot”) and easy to brush off, but others struck a chord. A couple days ago a commenter named “concerned” left a note under my baby q+a blog post on the site, explaining they were part of a group with many donor conceived children who felt hurt and pain over “not being allowed to know who their father is”. They asked “have you thought about the consequences to your baby” and finished with a real stinger: “This will never be only your child. DNA tests aren’t going away”. ?‍? I have to admit, this commenter shook me – I stayed up for hours in bed that night wondering how to respond. Of course I’d considered all of these potential future issues for my child, and it’s a huge fear of mine to feel like I’m not enough, but suddenly I couldn’t find the right words to stand up for myself and my choice. It was only the next morning walking the pups that it hit me: DNA doesn’t make a dad. ?‍? The idea that DNA = family not only puts down my path as a single mom, but questions the validity of adoptive parents, same-sex parents, single parents who were left by a partner, and heterosexual couples who need to use a donor for medical reasons. Being a parent is a conscious choice, and the only ingredient that really matters in my books is LOVE. Yes, I grew up in a loving, supportive, very nuclear family, but lots of folks grow up with one parent, four parents, adoptive parents, or a whole village of parents… and some have a hetero Mom and Dad who got married, had sex, made a baby yet don’t end up being supportive, loving parents at all. No matter the shape and size, a family is built on the foundation of love, not eggs and sperm, and regardless of where their cells came from, this baby is going to have more love (and more awesome father figures) than they know what to do with, biological dad or not. ??? What did your family look like? #raoprealtalk #apastelbaby #modernfamily #singlemombychoice #familylove

What advice would you give to women who don’t have the support of their family?

I will say that I think it’s mandatory to assemble some sort of tribe if you take the route I did. You need to have people on your side who aren’t going to leave when the going gets rough. If your direct family isn’t supportive and you still feel sure that this is what you want, build a family that does support you.

If you have one hope for your child, what is it?

To see the magic in the world that I see, in some small way, every single day.