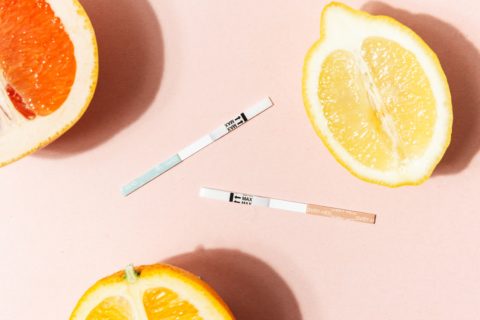 Toronto-native Jackie Rhind got the idea for OVRY, the direct-to-consumer company aiming to make pregnancy and ovulation tests more affordable and sustainable, from personal experience. Rhind has a blood clotting disorder that precludes her from taking hormonal birth control and would often find herself buying pregnancy tests at pharmacies where the markup was high and the tests had large single-use plastic handles. “We deserve a better option,” says Rhind of people who have a need for the tests.

Her lightbulb moment came while using a small test strip to identify ketosis when she was on the keto diet. “I thought, they should have this for pregnancy tests,” says Rhind, who discovered strip pregnancy tests do exist and are often used in doctors offices and hospitals. “I realized there was a need to build a trustworthy brand with really high-quality products in a less wasteful, more convenient format where people can order them discreetly from their home.”

Enter OVRY. The Vancouver-based business offers pregnancy tests that are 109 times smaller and use 99 percent less single-use plastic than any midstream test found at the drugstore.  A small box of four OVRY pregnancy tests retails for $18 and a large box of 18 pregnancy test is $36.

Rhind says consumers are vulnerable when it comes to purchasing pregnancy tests. “I’ve been there. You go into the store and look at the cheap version and more expensive versions [of the pregnancy tests available] and just think to yourself, ‘I don’t care if it’s an extra $7, I want to work,’ but you don’t have the information that these tests could all have the same accuracy.”

It’s a common misconception, says Rhind, that the more expensive the test is, the better it is. “Largely, that is not true,” she explains. “Pregnancy tests are highly regulated and must meet high standards or they would not have clearance to be sold.”

Less expensive tests available at some bargain stores may be sold closer to their expiry date. This wouldn’t necessarily make them less effective, but you wouldn’t be able to keep the test on hand as long as others. (OVRY tests, which are manufactured in Canada and approved by Health Canada, have a 24-month shelf life from their manufacturing date, which is clearly marked on the packaging.)

Since launching in late 2020, the range of people using OVRY has been wide, says Rhind. The biggest consumer has been people trying to conceive, naturally or through IVF, who are going through high quantities of tests. “Athletes who experience irregular cycles are another group we’ve heard from,” says Rhind. “They don’t know if they are pregnant or just training really hard.”

OVRY’s inclusivity has been by design. “We want to ensure we’re not excluding people that don’t usually get spoken to, but that our products are absolutely eligible for,” she says. “When you normalize non-gendered language, it sets the bar and encourages other businesses to follow suit.”