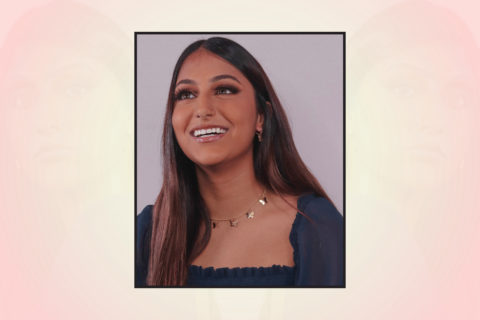 My Story: This Young Activist is on a Mission to Build a More Inclusive Mental Health Space

Welcome to My Story, our weekly series championing creatives of colour and their paths to success.

Drawing the perfect cat-eye flick is the latest addition to Dhaliwal’s self-care menu, a range of go-to activities put in place to improve her well-being. “Even if I’m just going downstairs to make food then going off to study, [makeup] can feel empowering,” expresses Dhaliwal, who is currently studying science at the University of British Columbia and aiming for med school. And as someone who has struggled with her mental health for several years, self-care has become crucial, especially during an unsettling pandemic.

Other restorative ingredients in her wellness recipe include quick-start items – like simply getting out of bed and setting a daily routine, journaling and creative drawing – to big ticket tasks such as therapy. “Sometimes I need to go [to therapy] more, sometimes I need to go less…It just depends on what I’m going through at the time, and that’s completely okay.”

As for her trusty liquid eyeliner, interesting fact: It was part of a swag bag she received at the Canadian edition of the L’Oréal Paris Women of Worth gala pre-shutdown in March—along with a $10,000 award. Each year, the beauty giant seeks out Canadian women that demonstrate advocacy and change within their communities, and Dhaliwal, along with nine other women, was honoured with a charitable grant.

Dhaliwal was recognized for her work as volunteer vice president with the One Blood for Life Foundation, a non-profit organization which aims to increase the ethnic diversity of the national stem cell registry so patients who require a stem cell transplant have a higher chance of finding a successful donor. “You have a higher chance of finding a match within your own ethnic community. For a lot of racialized communities within Canada, those donor numbers are lower,” explains Dhaliwal, who started up with the organization whilst in grade 12. It was extremely meaningful work for her as, that same year, her beloved grandfather was diagnosed with cancer and required numerous blood transfusions.

During the gala, Dhaliwal was also celebrated for becoming a committed mental health advocate after living through personal agony.

In grade 11, Dhaliwal struggled deeply with her mental health and her deteriorating mental state led to an attempted suicide that left Dhaliwal in a coma and recovering in an adolescent psychiatric ward. “I was feeling suicidal because I didn’t have healthy coping strategies. Time in the hospital and going to counselling and therapy really helped equip me with those tools,” she says, acknowledging that her mental health is a continued healing journey. “A big personal goal is to get to a point where I’m confident enough to say that I’ve been able to move past what I’ve been through.” One thing that has helped tremendously: Not dwelling on her health issues and, instead, speaking out and sharing her story.

The L’Oréal Paris grant inspired Dhaliwal to put the money towards starting her very own mental health organization, a passion project that has been brewing in her mind for some time. “Winning was the affirmation that I needed that my mental health story was being heard and my work was being recognized. After that, I garnered up the courage to start,” she says.

Called the Voices for Hope Foundation, the organization, which is in its planning phase, aims to dispel harmful misconceptions surrounding mental health and illness, and bring light to these “invisible” health issues. “We do that by spearheading educational workshops and campaigns, writing social justice think pieces and through policy and advocacy work,” states Dhaliwal.

And at the heart of the organization she is building is a platform to amplify BIPOC voices. “We want to give [people of colour] a safe space to share their experiences and equip them with tools for healthy healing” she says. This is particularly important because culturally sensitive representation and resources truly matter in the mental health space, something Dhaliwal wishes she saw when struggling with suicidal thoughts.

“I often felt a lack of validation and visibility due to there being an absence of culturally-informed therapy as well as a lack of BIPOC mental health professionals. I can also remember being 16 and being admitted to the adolescent psychiatric ward where I was the only brown person there and one of the few BIPOC patients in general. This led to a feeling of isolation and cultural disconnect,” explains Dhaliwal. “When speaking to a therapist, I often found myself expending more emotional labour trying to explain the complex dynamic of my culture in relation to my mental health struggles, and often did not find their advice applicable. Simple advice such as ‘communicating with your parents’ was hard for me to believe in.”

As the second-generation daughter of hard-working Punjabi-Sikh immigrants, Dhaliwal grew up in a culture with a survivalist mentality of “keeping your head down and powering through your problems”, she shares. Opening up about her poor emotional health to her family just didn’t feel like an option. “There is a word in Punjabi called ‘izzat’, which means honour. Staying silent is seen as honourable because of the survival mentality that has manifested in our community. Talking about your problems is self-indulgence.”

It’s complex stigmas like these that inspire Dhaliwal to speak out today, especially so that young racialized women like her “can see that there is someone who looks like them who went through this and came out the other side stronger.”

PHOTOGRAPHY BY JASMINE SEM-DUONG. Design by Danielle Campbell.
Get the best of FASHION in your inbox Thanks for signing up!
The latest fashion, beauty and celeb news delivered right to your email #FASHIONforall Now, check your inbox to complete your subscription
We won’t ever use your email address for anything else
Want even more FASHION? Follow us on social media.