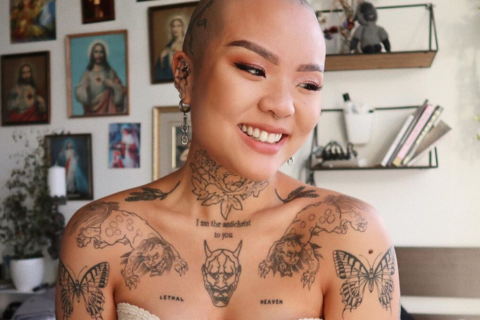 Their meaning is more than just skin deep.

Interesting fact: Most of Mei Pang’s tattoos are symmetrical. “I tell people that what you see on one side of my body, you see on the other side,” comments the Toronto-based makeup artist and beauty influencer. How many body stamps does the 23-year-old have in total? About 80.

Pang’s earliest tattoo, a large chrysanthemum located on the middle of her stomach that was inked when she was the fresh age of 18, was inspired by Rihanna’s giant tat of the Egyptian goddess Isis on her sternum. “I was always into hair, makeup and piercings, so I feel like tattoos, for me, were the next natural transition,” says Pang.

In her mind as a first-timer, the bigger the ink job the more braced she’d be down the road. “I thought it would essentially prep me for the rest of the tattoos I wanted to get in my life—that the others were going to be an absolute piece of cake,” she says. But having since gone on to ink a running list of areas, like her head, neck and butt, Pang was dead wrong. “That was a terrible lie I told myself,” she laughs.

Most of Pang’s skin art has been done by Toronto tattoo artist Corben Matsell-Savage, and her most recent—a pair of panthers, one on each side of her belly button, encircling a spiderweb—ended up being her most painful to date. “They’re maybe a little less than a foot in size, and when I got them done, Corben was like, ‘Wow, it’s like riding in a rodeo! You won’t stop moving,’” reminisces Pang. The single-session time for her panthers? Three and a half hours.

As painful as tattoos can be, you can’t compare this to self-acceptance. “It’s just who I am. I feel the most comfortable with being bald and having tattoos,” says Pang. Her positive, self-loving attitude is a total switch-up from her pre-tattoo years growing up in her hometown of Oakville, Ont. “It was a very Caucasian town,” remembers Pang. “It was literally me and maybe two other minorities in my high school.” As a result, outside pressures weighed heavily on her sense of self. “Before, I thought, ‘Oh, the longer the hair the more pretty you are.’ I had hair all the way down to my hips,” she says. “I tried to really give in to Western standards of beauty.”

Thankfully, her take-control body ink has allowed Pang to affirm a very empowering concept. “I have never felt prettier, which has made me learn that people have their own definitions of beauty,” she declares. “Being bald and covered in tattoos has opened my eyes to just accepting that there are more ways than one to be beautiful.”

As for the most meaningful ink that decorates her body, Pang references the symbols located around her shoulders and above, like the Chinese dragon atop her head to celebrate her Asian heritage. The precious zone is also home to her most controversial tattoo: The words “I am the antichrist to you” are stamped between her collarbones. The marking has helped the openly bisexual artist navigate— and conquer—heartbreak, which she experienced with her first love, a girl who was also her best friend throughout high school. Near the end of their senior year, Pang professed her feelings. “I told her, ‘Low-key, high-key, wherever you go, I’ll go with you because I’m in love with you,’” she shares. “She just told me: ‘This is sinful. You need to get out! This is Satan tempting you.’ She essentially called me the Antichrist.” But Pang isn’t looking for sympathy, because the marking has a pleasing double meaning. “It’s also the name of a really beautiful song from Japanese-American artist Kishi Bashi.”

Photograph courtesy of Mei Pang
Get the best of FASHION in your inbox Thanks for signing up!
You’ll get the latest fashion, beauty and celeb news delivered right to your email Now, check your inbox to complete your subscription
We won’t ever use your email address for anything else
Want even more FASHION? Follow us on social media.