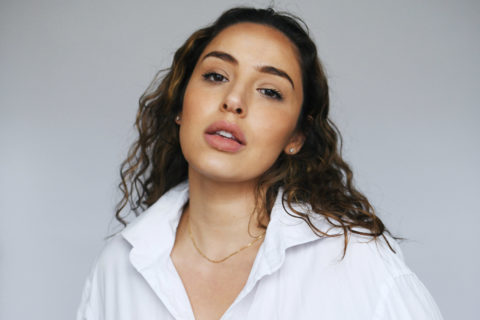 “For me, it was about getting to the root of all these things that lead women to live a life where they’re constantly being undermined."

You could describe Jada Sezer as an accidental model, but it’s hardly coincidental that her rise to fame comes at a time when people with a point of view are considered within the industry to be its most potent representatives. Many disruptive content creators and influencers like Sezer are advocates for consumers who have long been ignored by designers and retailers and shamed by the media for not adhering to its narrow, Western-centric beauty ideals. But Sezer, who is also breaking into the acting game, didn’t initially have fashion as part of her career plan.

“Never in a million years did I think I would be doing what I’m doing today; however, what I do today is so related to what I did,” says Sezer. Almost a decade ago, she was pursuing a master’s in child psychotherapy in her native London, England. While studying eating disorder cases, she came to realize that “the media plays a big role in reinforcing certain body type ideals and beauty standards.” This frustrated her because she had “travelled a lot as a kid and knew that beauty looked like different things on different continents.”

During Sezer’s studies, Instagram was in its infancy, but she immediately recognized its potential for starting a global conversation about body positivity. “When you’re training to be a therapist, you’re not necessarily supposed to be offering advice,” she notes. “So the things that I really wanted to say to these kids I vocalized online.”

After receiving favourable feedback about her posts from her ever-expanding audience, Sezer escalated her strategy for communicating her message about reinforced ideals and mental health. “It became a bit like campaigning,” she says about her efforts to draw attention to the concept of a healthy body image by posting editorial-style photos of herself online.

“I have to be an example of what I’m talking about—not just talk about it. You have to see it to know you can be it.”

Thanks to the slick quality of her content, Sezer’s images and advocacy went viral. The next thing she knew, “[she] was asked to be the face of the first-ever plus-size-focused show during London Fashion Week.” Since her first steps on the catwalk in 2013, Sezer has watched her Instagram following reach nearly 300,000; has been signed to the international agency Wilhelmina Models; and has appeared in advertising for Adidas, L’Oréal Paris, Mango and even Canadian plus-size retailer Penningtons.

In addition to Sezer inspiring people through her content and commercial campaigns, her movement toward becoming her own “brand” over the past few years was motivation to streamline how she exerts her influence. “When the conversations around diversity, body positivity and mental health became more mainstream, I started to take a step back and be very specific about who I worked with, and I became an ambassador for UN Women last year,” she says.

The organization’s efforts resonate with Sezer because “they cover all the bases,” ranging from issues of domestic violence to financial independence. “For me, it was about getting to the root of all these things that lead women to live a life where they’re constantly being undermined,” she says. “I started to realize that it was never just about body positivity for me. It was about women being underestimated and underestimating themselves in turn. Why do we do that? Where is that being reinforced? And how do we maintain the resilience and integrity to know who we are and that we’re good enough just the way we are?”

One of Sezer’s most public displays in championing this idea came in 2018, when she ran the Virgin Money London Marathon in a bra and panties alongside journalist Bryony Gordon despite never having run one before. “I never even knew how far a marathon was,” she laughs. Her feat became big news, with the duo raising over $43,000 for a local charity and encouraging over 800 women to run the 2019 marathon with them—women of all ages, abilities and sizes, all clad in their skivvies.

Soon enough we’ll be bombarded with summer beach body weight loss ads and ‘get your body back’ messages. Which are all absolute rubbish! – These products are packaged and sold as the key to fulfilled happiness yet work by making us feel crap about ourselves first. I look back at the pics from Monday’s run, I’ve never seen women happier and prouder about their incredible bodies!! This was achieved with NO flat tummy tea’s or skinny lollipop’s. All it took was being braver, kinder, showing up for yourself & doing this whilst being amongst a like-minded community. That’s the key!! ?

Sezer says the underwear angle reinforced the idea that “fitness doesn’t look like one thing” and that women can, and should, take control of how they’re represented across all platforms in life. The act was also a perfect paradigm of Sezer’s most notable quote: “I have to be an example of what I’m talking about—not just talk about it. You have to see it to know you can be it.”