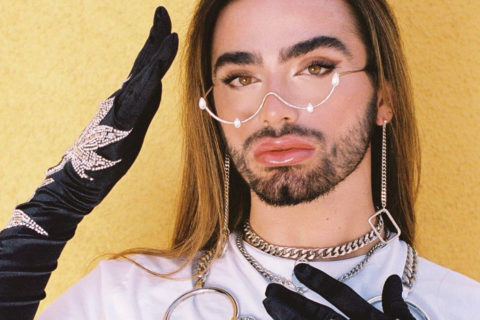 The Toronto-based beauty expert and hairstylist recounts how he forged his own path.

I used to feel like I was playing a role that I hadn’t signed up for. I love embracing masculine and feminine energy in how I dress today, but growing up in Australia, when I found I wanted to express myself in a way that was different from the heterosexual masculine conventions I was born into, I felt very confused and lost. I was so afraid and unsure of how I could explore another way of dressing because of the community I was surrounded by.

I’m Lebanese, and Middle Eastern culture is very tough, especially for someone who, like me, is queer and outspoken. I was baffled by how freely people in other countries express themselves. Australia is very slow in terms of human rights progress and how people are allowed to identify. It’s also very isolated, so it’s not influenced by outside factors, like how it is in North America. I was never able to live the way I wanted to — 100 per cent authentically — and in my youth, I lived vicariously through other people.

I had a friend—my first in the LGBTQ+ community I eventually became part of—who was also Middle Eastern but was very carefree in how he dressed and acted. I saw him being his authentic self and I thought, “Why is that person able to do it and not me?” I’ve come to believe in being “self-full” and not selfless; I deserve to be happy and to not always have to worry about everyone else’s feelings when it comes to my happiness. And it’s my responsibility as a queer person of Middle Eastern descent to be that example for someone. I need to hold myself accountable for things I’m doing because I’m punishing myself and others when I’m not living for myself.

READ…. There is nothing more beautiful than looking back at your growth, journey and the lessons you’ve learned along the way. Looking back at the photo on the left, l see someone who tried to fit in to wherever he could, tried to please everyone in his life but himself, so afraid of not being accepted by his family, community, culture and the world. Growing up in a traditional Lebanese family, expressing my femininity was something I was terrified of doing, so I used to try to cover it. Performing in ways that I never identified as, I felt like I was playing a role I never signed up for. As @mylessexton would say (straight drag). I continuously felt lost, confused and misunderstood, but I came to realise that I am beautiful inside and out and I could be exactly who I want to be. So I decided to change  my life, but long story short I had to make a huge shift in my world to be SELFULL for my happiness and not selfless. After making those changes, I was blessed that people were able to see something in me, something that allowed me to have many opportunities and has opened up so many doors for me. Being Lebanese, I never had any members of the queer community around me, so I had no one to turn to. But little did I know that there are millions of Queer middle easterners that are simply not talked about. They have been hidden all their lives and too afraid to speak up and be vocal. They were, and some still are, afraid for their lives, as it is still punishable in the Middle East to be a member of the LGBTQI+ community. There is so much beauty, talent, Drag, artistry, creativity, and all things you can imagine in the Middle East that deserve equal representation. I stand here as a proud Lebanese member of my beautiful LGBTQI+ community. I am showing you that, no matter what, we give people and society the power to determine how we should be. I’m working on being a voice for those who don’t have one and I encourage you to do the same. Like I always say: you are loved, beautiful, valuable, important, special and worthy. Thank you always for your support. Jacques Claude ?✨???️‍? #arab #middleeast

As I became more involved in the queer community, I started to attend vogue balls. For one event, I was preparing to walk in a category and bought myself a pair of black stiletto heels for the occasion; I’d describe them as “ankle-breakers.” It was the first time I’d ever bought something that I was raised to feel I shouldn’t wear, and it was very emotional for me. Lisa, the young woman who helped me — I’ll never forget her name — was so complimentary; as I told her my story, she was very supportive and made me feel so comfortable. She said that if she had children, she’d allow them to express themselves however they wanted. “I hope my son turns out to be gay,” she enthused.

I came out very late — only a few years ago, right before my 21st birthday. I was always that child who wanted to keep their family together, and I never wanted to draw any attention to myself. My mother, who was a single mum, was my best friend, and her beautiful, put-together style has always influenced me. But I grew up in a rough, masculine household with brothers who were bodybuilders. When I came out, it was dramatic and devastating. My father and brothers disowned me — I haven’t spoken to them since — and my mother stopped speaking to me as well because she felt pressured by the community. I wasn’t the child they wanted me to be; I was a disgrace to them. For the next three years, I was homeless; at one point I only had $50 to my name.

I eventually moved to Los Angeles, where I continued to work as a hairstylist and became part of the celebrity glamour world. This is when I truly started to feel like I was expressing my authentic self with my style. Through my connections there, I was invited to a party hosted by the cosmetics company Nyx, and afterwards I promoted one of its foundations on my Instagram (which at the time didn’t have a ton of followers). A few months later, Nyx regrammed the post and it blew up. It was the most liked and commented on post for the company at that time, and it caused a lot of controversy. Many people commented in loving and supportive ways, while many others expressed hate, saying they were going to boycott the brand because it promoted the idea that what I represent is normal when in their minds it wasn’t. Nyx had to release a statement about it, and I was interviewed by multiple media outlets around the world. From that incident, my following grew massively.

Can we talk about how flawless ✨✨✨@jacquesclaudesader looks in our Can’t Stop Won’t Stop foundation in Classic Tan! Use code FLAWLESS on our website for FREE ?? shipping! ? ||#24hoursofslay #nyxcosmetics #nyxprofessionalmakeup

I believe that everything happens for a reason and that your path is always cleared for you to walk. After the Nyx post, I thought I may as well be the voice people want to hear. I’d been searching for someone to identify with my whole life, and I realized that I could be that person for others. I think about all the influences in my life — from the ballroom and voguing scene to Eurovision contestant Conchita Wurst to supermodel Linda Evangelista to performers like Cher, Christina Aguilera and Prince. Prince’s gender had nothing to do with how he dressed; he found himself in a lot of controversy over it, but he never backed down for anyone.

I hear from lots of people around the world who thank me for being the voice they never had. And I think it’s important that we all give thanks to queer people of colour because they made space for us. I also have my mum back in my life. She loves the LGBTQ+ community and goes to Pride every year, but having been raised a certain way, she was never taught how to deal with LGBTQ+ people. Now, she’s an activist, and she talks to parents and the broader community. We always say “When you don’t know better, you don’t do better.” And I always consider these questions: How am I benefiting myself and others and this world? Nothing is more important than making an impact—otherwise, what are we here for?

Photograph courtesy of Jacques-Claude Sader
Get the best of FASHION in your inbox Thanks for signing up!
The latest fashion, beauty and celeb news delivered right to your email #FASHIONforall Now, check your inbox to complete your subscription
We won’t ever use your email address for anything else
Want even more FASHION? Follow us on social media.