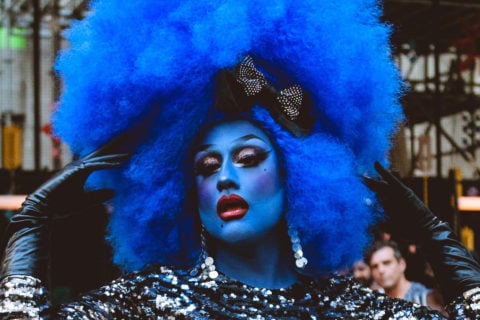 Get to know the Toronto-based drag artist who’s chock full of fun and primary colours.

Jason Hatton, a prop stylist and visual merchandiser by day who has worked for high-end companies like Chanel, has the incredible ability to turn himself into Mango Sassi, a spirited drag queen with an affinity for vivid hues. Read on for Mango’s story.

“Last Halloween was my 10-year anniversary of doing drag, but I’ve only really been focusing on it for the last three to four years. I have an annual party that I’ve been doing for the last seven years, and that was usually the time I would get in drag along with all my friends. It has since developed from there. One of my favourite things I’ve done while in drag is take the subway for a couple of daytime gigs! The first time I did it, I was quite afraid, but after I saw the reaction of people, it was such a lovely experience: You get smiles,  joy from people, and people wondering what the hell is going on! You usually get really positive responses.”

“Oh boy, it’s kind of a blur! It was 10 years ago on Halloween. I love disco, so I created this disco look with the very little knowledge I had about drag. It was a bit of a hot mess. But, saying that, I was living my best life! I mean, when you’re in drag it doesn’t really matter how perfected or how rough you look. It’s really kind of the attitude that comes along with it that makes it such a fun experience for you and for other people.”

On landing on the name Mango Sassi:

“I’ve had the name probably for eight years. I was with my mom, my boyfriend and one of my very good friends at an Indian restaurant. We were at the table talking about how I was going to be throwing my very first party, and I was like, ‘I need a proper name.’ Right when I was talking about it, this popular Indian drink called mango lassi came to the table. I think I just said, ‘Oh Mango Sassi! That would be the perfect name.’ I do get quite sassy when I’m in drag, so it just felt very appropriate. It just stuck after that.”

On her drag family:

“I don’t have a drag mother. I’m self-taught, just like most things I’ve done in my work life. But I’ve definitely developed a drag family. I definitely have a community. There’s a good solid 10 of us and we all do drag together, and we’re always helping each other. When I do group performances, they come along for the ride, get dolled up and dance with me on stage. It’s been quite a lovely experience with them. [A drag family] is like the same principles of a regular family, except they are a chosen family, which as queer people, a lot of us have. We already exist outside the box, and so we often have to create our own chosen family that consists of people that share the same views, values and interests. With drag, you’re basically there supporting one another, helping one another, teaching one another — even arguing with one another — and it’s all because you love one another.”

On the biggest differences between Jason Hatton and Mango Sassi:

“Oh boy. Well Jason is definitely a lot more in his head. I’m always analyzing and thinking — sometimes over thinking things. And I’m a bit more of an introvert as Jason. Mango is definitely in the moment. She’s a lot calmer and much more adaptable.”

On the key items in Mango’s makeup kit:

“Definitely a good foundation primer, like Smashbox Photo Finish Primer. To seal down my eyebrows, I use an adhesive called Pros-Aide. Anastasia Beverly Hills has a black gel liner called Jet that I absolutely love. I use that for my eyebrows and my eyes, and it’s so deep and saturated so you really don’t need to go over it multiple times. Sometimes I even use it on the edge of my lip depending on what kind of makeup look I’m working with, because with drag, you just have to push the limits on how you’re using colour. I also use eyeshadows to contour and on top of lip colours to give more dimension. And 301 lashes are definitely a must!”

On Mango’s love for primary colours:

“It’s something that just naturally evolved. The first time I did it, I was going to an underwater party that somebody was throwing in the city and I wanted to create some kind of creature. I had these squid fingers and decided to paint myself a bright colour. I really enjoyed it and just thought that exploring bold colours was such an interesting way to contour your face and experiment with products. Blue is definitely the first go-to, and I also loving playing with green and purple.”

On her incredible wig collection:

“I probably have 100 wigs to be quite honest. When I used to do visual merchandising for Chanel, I would do about six to eight window displays a year throughout Canada for six different shops. Chanel had very life-like mannequins that had wigs and makeup, and I would actually have to paint makeup on them and also style the wigs that would come from Paris. Chanel didn’t reuse wigs, so I would basically keep the majority of them. And after working for Chanel for over four years and doing all those displays, you can imagine how many mannequins I worked with.”

Curious why Mango Sassi favours a blue visage? Want to know how long it takes her to do her makeup? Watch FASHION Canada’s very first #FASHIONFridays Live with the fabulous drag artist below.