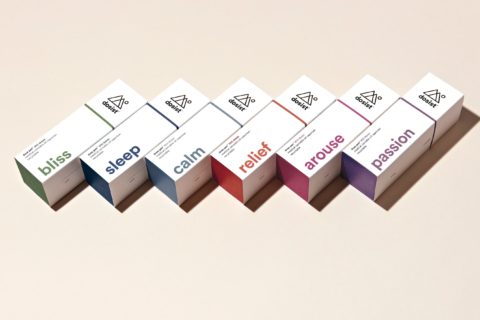 We Tried Dosist’s Marijuana Vapourizers, Which Have Been Banned in Canada

I use cannabis pretty much daily—mostly as a sleeping aid, but it helps with other activities, too. For instance, it’s incredibly helpful when I want to eat an entire box of Eggo Waffles.

It’s a little surprising, then, that a new cannabis company preparing to enter the Canadian market would be the catalyst for me to maybe, possibly, for the first time, consider thinking about how I might want to potentially cut back a tiny bit on the totally responsible amount of cannabis I smoke. That might not sound impressive, but considering my feelings about cannabis, it’s basically the same as The Rock considering skipping leg day. Such is the power of Dosist.

According to an information booklet that looks like it could be a special edition of Kinfolk, Dosist is “a health and happiness company founded on the premise that cannabis-based medicine can bring healing and happiness to the masses.” It aims to do this through its cannabis formulations dispensed via its proprietary pens (which resemble what tampons would look like if they were designed by Apple). The pens ensure a controlled dose (hence the name) of 2.25 milligrams with each pull, so users can know exactly how much cannabis they are using and will consistently get the same results. Dosist eliminates the intimidating guesswork in marijuana consumption and makes it as easy, safe and reliable as possible. Despite all this, Dosist is still illegal in Canada due to the country-wide ban on cannabis concentrates and vapourizers.

Regardless, all of us on this Dosist-assisted journey through California are given all six pens in the lineup when we arrive at our hotel in Malibu. They are packaged stylishly in a classic tin “first-aid kit”—the kind you’d buy at Best Made, not Shoppers Drug Mart. In it are pens labelled Sleep, Bliss, Relief, Calm, Passion and Arouse. Each one mixes THC (the stuff that makes your brain feel high), CBD (the stuff that affects your body) and specific terpenes (the essential oils that give different strains of cannabis their varying scents and health benefits) in different doses to achieve their titular effect.

The first day: I take two pulls from Calm before dinner. I hardly feel it. But I’m not stressed about it, so there’s that.

The next day, I try Bliss. I lose count of how many pulls I take before and during an hour-long hike. By the time it’s over, I feel a little clumsier than normal but not at all impaired. There’s a contentedness floating at the edges of my awareness (which certainly sounds like something a stoner would say) that’s pleasant. Like I’m soaking my legs in a hot tub but I’m not overheating.

We’re joined at lunch by SoYoung Park, Dosist’s chief innovation officer. She seems excited that I’m a regular cannabis smoker. “Do you think you’d ever give up smoking entirely for something like this?” she asks. I’d been wondering about that, too. Because, as I tell her, there is something enjoyable about the process of rolling my nightly joints. “We hear that so often,” she says. “The ritual is a big part of the experience.”

Of course, some people will always prefer to use flower. But the company rightfully assumes that that ritual—and all the accessories and culture that go with it—is a barrier to entry for people in the mainstream. After all, if you want to drink a glass of wine at night to wind down, you don’t have to crush your own grapes.

But that weed-to-wine comparison falls short. Cannabis—especially when it’s formulated and packaged like this—is hard to categorize. It can seem like a cure-all, but, unfortunately, nothing is. Those with some mental illnesses, like bipolar disorder, should be careful (or avoid it entirely). Plus, they should talk with their doctor. Cannabis is not entirely medicinal; nor is it entirely recreational. It’s somehow both and neither.

“Wellness” covers a range of products and practices, some more legitimate than others. And even though Dosist is on the more empirically verifiable end, there’s still something about it that feels religious.

If, for example, you take a dose of Calm after a hard day of work or enjoy Relief after a strenuous workout, it’s not quite medicinal but not quite recreational either. Even Arouse, which can be used for other activities but is specifically formulated with a high THC-to-CBD ratio to increase sensitivity and intimacy, falls in that liminal space between recreation and medicine, doesn’t it?

It’s this understanding of what cannabis is and isn’t—along with the casual utopian vision that Dosist paints—that makes the company special. “Wellness” covers a range of products and practices, some more legitimate than others. And even though Dosist is on the more empirically verifiable end, there’s still something about it that feels religious. I find that I want to share Dosist with others the same way missionaries want to preach the Good News: “It worked for me, and it can work for you!”

When I got back from my trip, I got my girlfriend to try a bit of Sleep. One pull and she felt her body relax and melt. It worked perfectly. It made me feel a little like how my dog is with bacon. He loves it, but he swallows each piece whole like a pelican. Dogs aren’t great at savouring their food. And me, I’m not great at savouring and appreciating the subtlety of Dosist. There’s something childish about the way I use cannabis now. Our laws are growing up. It’s probably time I did, too.

Photography courtesy of Dosist
Get the best of FASHION in your inbox Thanks for signing up!
The latest fashion, beauty and celeb news delivered right to your email #FASHIONforall Now, check your inbox to complete your subscription
We won’t ever use your email address for anything else
Want even more FASHION? Follow us on social media.