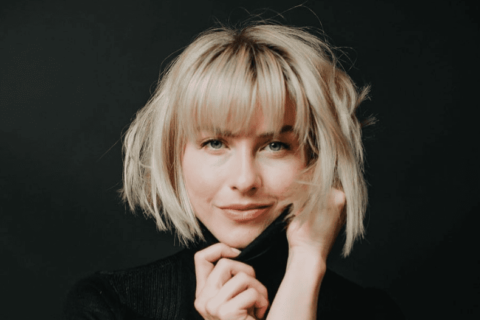 "It gives words; it gives a name to the pain. When I say I’m having an endometriosis episode, it gives me clarity—but it also gives the people around me clarity."

I didn’t actually know what endometriosis was when I agreed to talk to Julianne Hough about it. I just knew that, having grown up in the dance community, Hough was someone I had admired for over a decade, and that I would take just about any opportunity to chat with the Dancing With the Stars veteran—even if it meant me writing about a health-related issue I didn’t necessarily relate to.

Later, however, when I copied “endometriosis” from my email and pasted it into my Google search bar, I realized I might have something to talk about after all. Endometriosis, I learned, is a medical condition that occurs when tissue that acts a lot like the lining of the uterus—called endometrium—starts growing outside of the uterus, where it doesn’t belong. Symptoms vary from woman to woman, but often include painful periods, pelvic pain in between periods and pain with sex. My immediate thought was, “Hey, I experience those things.”

Hough went from learning about the medical condition to ignoring her own symptoms to keeping her diagnosis a secret to becoming a spokeswoman in partnership with the endometriosis resource website, SpeakENDO.com. Now she’s sharing her story and she’s encouraging others to do the same, because “the more we talk about it, the more it becomes a thing.”

I’ll be honest, I didn’t know what endometriosis was until I started preparing for this interview. But the timing of our chat seems oddly coincidental: just last night, I was experiencing period cramps so extreme that I almost had to leave my sister’s birthday dinner. I was scared, because I didn’t really understand the pain. And this has happened before: a few months ago I went to the doctor because I thought my appendix was going to burst, and he told me I was just experiencing menstrual cramps.

Now, reading about endometriosis for the first time, I realize there’s a good chance that I have this thing that I knew nothing about.

That actually my heart really happy. Because I think so many women disregard this as, “Oh that’s just period pains, this is part of being a woman,” when in fact, no, it’s not. These are sharp stabbing pains. Sometimes I experience them like 30-second to one-minute contractions, where I can’t even breathe, I can’t even talk, I’m just in so much pain.

One in every ten women has endometriosis. They don’t know to ask the right questions, or their doctors don’t have the right information about it. I’m really happy that you were able to feel at least a little comfort in thinking, “Oh wow! I can put a name to what’s going on with me.”

By other people, but also by my self. I think that before my diagnosis, I just brushed it off like everyone else. I found out about the disease when, at 18, my roommate had endometriosis. I was like, “Endo what? That sounds medical, I don’t want to know anything about it. Even though what you say you have sounds exactly like what I have.”

I was around 20 when I was on Dancing With The Stars and collapsed during the commercial break. Like you, I thought my appendix was going to burst. I just didn’t know what it was. They took me to the ER, and my mom said to me: “You’re going to figure out what this is. I don’t know what you’re doing not looking into this.”

The doctors didn’t know what it was, so they just kept prodding me and poking me. Finally, one asked if I had a gynaecologist. I ended up finding a great one, and he was the one to tell me I have endometriosis.

How has knowing where the pain is from helped you deal with it?

It just gives words; it gives a name to the pain. When I say I’m having an endometriosis episode, it gives me clarity—but it also gives the people around me clarity. It gives them an understanding which makes me seem sane and understood. So it’s empowering on all forms.

Someone reading this interview might, like me, realize they’re showing symptoms of endometriosis. What are their next steps?

Honestly, I know I’m doing this campaign, but I’m doing it for a reason. Go to speakendo.com, because there’s a whole quiz that will tell you if you share symptoms. There’s also a doctor discussion guide so you know the questions you need to ask your doctor, so you can be articulate. It basically just makes you feel confident and empowered to speak about your pain.

Have you felt that the conversations around endometriosis have changed a lot since you were diagnosed 10 years ago?

When I was first diagnosed, people had no idea what endometriosis was. And I don’t mean a few people, I mean everyone—doctors included. The response to this campaign—I think it was 2 and a half years ago it started—has been monumental. It has been so fulfilling to see how this campaign has helped so many people not only talk to their doctor and seek treatment, but feel understood.

And now, I find myself in this tribe of women in the endometriosis community, where I feel so nurtured. I didn’t even know about this community of women until I started the campaign, and so with the hashtag, #speakendo, women are constantly giving each other advice and support.