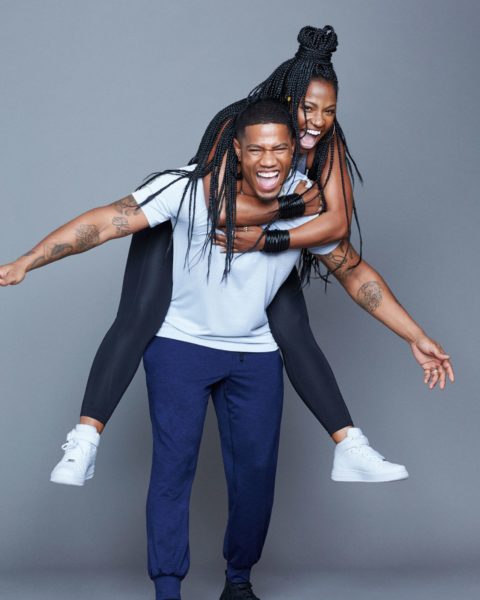 It involves a lot of basketball-inspired dance moves and burpees.

You’re probably unfamiliar with Jonny Roxx’s and Tanisha Scott’s names on their own—unless you’re a dance and fitness buff—but we’re pretty sure you’ve heard of the artists they have worked with. In terms of clientele, it doesn’t get more A-list than this.

Aside from being Drake’s personal trainer (they just wrapped up his latest tour), Roxx also works with the biggest NBA athletes as well as British Formula One racing driver Louis Hamilton. Scott, a choreographer, has worked with Alicia Keys, Beyoncé, Aaliyah and Nas—to name a few. Oh, and she was also the creative force behind Rihanna’s “We Found Love” and “Rude Boy.” #nbd.

When it came time to finding the latest collaborators for GapFit’s Make Your Move content series, the global retailer couldn’t think of two more suitable ambassadors for the job. The series is made up of mini workout and dance videos and GIFs created by the athletic duo, with many of the moves inspired by the artists they work with.

“Drake likes basketball and loves sports, and his movements replicate a lot of basketball moves,” says Scott. “I create his dance moves around these motions that come naturally.” The same thing applies to working with Rihanna. “Her strength is in her hips. She’s a mover and a dancer, and with her it’s about the song and it’s about the image she’s trying to portray,” explains the NYC-based choreographer. “If she wants to be a snake, we’ll look at snake-y kind of moves. If she wants to be like Queen Nefertiti, we’ll have regal moves. It’s whatever the inspiration or concept is and build from there.”

Roxx’s 20-minute full-body workout may be intimidating with all the tricep push-ups, planks, squats and, his personal fave, the burpee, but they are made up of foundational movements to help with individual strength. They also happen to be the moves Drake does on a regular.

“These are movements that I put him through if we had a short period of time and I wanted to get some calories burnt really quickly and get his heart rate up,” says Roxx. “Burpees are a movement that not everyone loves, but it’s something we do when I’m trying to get calories off of him. I’ll make him do a lot of those because I know it’s a good functional full-body movement, but he probably hates it.” (Regardless, it’s working!)

Being on tour with Drake means there isn’t an actual gym, so the great thing about these moves is that they’re doable anywhere and anytime.

“We’ve modified everywhere,” admits Roxx, when asked about some of Drake’s makeshift workout spaces. “We’ve had to turn a bathroom into a gym. We’ve turned the back of a truck into a gym. One time we literally rented out a truck and built the back like a gym and had that moving around with us on tour. We’ve done a whole bunch of things to try and keep him fit. You name it; we’ve done it.”

Not about the squats and lunges? Cue Tanisha Scott’s custom-made dance moves: “The XO” and “The Side-Step-Stomp.” The great thing about these moves is that they’re not necessarily a step and repeat. Put on your fave tunes and dance like no one’s watching.

“You get two in one: You get your workout and you also get to have fun and dance and do some of the moves in your favourite videos,” says Scott.