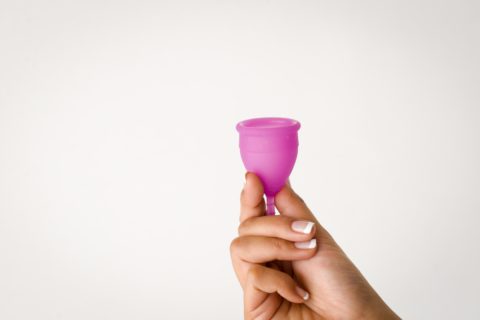 I endorse this cup, but not her manicure.
Health / Wellness

Why I Converted To A Menstrual Cup

“Guys! I’m Diva Cupping!” And with that text, yet another friend joined Team Menstrual Cup.

It was a message I received with glee, as I too converted earlier this year. And it’s been such a game changer that I wish I had been open to the idea of one sooner. But my use of menstrual aids has been an evolution that has required slow, incremental steps. In my teens I was too freaked out to use tampons, but after years of wearing what felt like a mattress in my underwear, I finally switched over to them in my 20’s. Then came the shift to organic ones, because I simply felt more comfortable with the idea. But when a friend told me about her Diva Cup—the most well known of all the menstrual cups out there, despite its unfortunate name—I just couldn’t go there. While the eco-friendliness of it appealed, the idea of inserting a reusable cup just seemed unfathomable. How do you even get it up there?

I had almost signed up for one of those organic tampon subscription services, but when I heard an additional ringing endorsement from another friend who had recently switched to a cup, I decided to take the bull by the horns and give one a go. Instead of Diva Cup, I went with Lunette which is essentially the same in terms of design but with a longer stem. And then I waited for my monthly visitor to arrive….

Without a doubt, insertion is the biggest hurdle to overcome; you have to fold it in half and keep it that way while it’s going in, which is no small feat. If you lose your grip while pinching it, it bounces back open and practically ricochets away. The process also really forces you to become intimate with your body in a way that only a gynecologist would be (Hi cervix!). You also have to accept that just like the name of the Paul Thomas Anderson movie, there will be blood (on your fingers). Once you get it in place though, it feels like nothing. The only downside is that you can’t do without fem care entirely. On day two and possibly three, you still need to wear a pad. Sad! But removal is much easier. You just pinch the bottom of the cup to break the seal, empty it in the toilet, rinse and repeat. And just like that, tampons are a faded memory. No more needing one in emergencies, pee-soaked strings (the worst) or fears of TSS.

I endorse this cup, but not her manicure.
Trends, beauty secrets, culture & more
Only $1 an issue #FASHIONforall
Subscribe now!