How Apple Fitness+ is Going to Change The Way You Workout

It’s been a big week for Apple and its fans. The California-based tech giant held its annual September keynote virtually on Tuesday, announcing the launch of two new iPads, two new watches (more on those later) and a first for the company in the form of a fitness streaming platform called Apple Fitness+.

Speaking of the inspiration behind the platform, Jay Blahnik, the senior director of fitness for health technologies, said, “Apple Fitness+ was built around a very simple inspiration — which we live every day —  that the entire service is built to help more people close more Activity Rings more often.”

Across multiple briefings and an exclusive interview with Blahnik, we got a deeper look into the platform and what it’s going to offer customers when it launches in Canada later this year. From an ever-expanding class catalogue to a focus on inclusivity (love to see it) and more, here are the key things you need to know about Apple Fitness+.

Apple looked at data from its workout app to determine the 10 most popular types of workouts its users do through Apple Watch  – from here, they built a team of world-class trainers to deliver classes every week in these categories. When the service launches you’ll be able to choose from treadmill walk, treadmill run, HIIT, rowing, dance, cycling, yoga, core, strength and mindful cooldown. Plus, once you start using the platform and the algorithm learns what types of classes/trainers you like, it will intelligently recommend new classes and trainers for you to try in your favourite categories, as well as new options as a compliment to your existing routine.

There are four ways to filter the classes to find what you’re looking for: trainer, class type, duration and music. Blahnik says keeping the search process simple – and not veering into beginner, intermediate and advanced options among other toggles – was a deliberate choice. “We have worked very hard to make the process of choosing a workout as a simple as possible. Some people want recommendations, some people know exactly what they want, some people only want the latest workouts and other people want to enjoy the process of discovery. We built Fitness+ to make it easy for all of these types of users to navigate the workout library without feeling overwhelmed.” That’s not to say that the workouts don’t offer varying levels of difficulty to cater to every fitness level. In each class, one of the trainers from the Apple Fitness+ squad will do the modifications so there’s something for the beginner right up to the more advanced athletes and workout junkies. Plus, there’s a preview option offered for every class, where the trainer gives an overview of the class and tells users what equipment they’ll need (which is usually nothing or simply a set of dumbbells).

New classes – which are available in 10, 20, 30 and 45 minute lengths – will be dropped weekly, allowing users to plan out their week of workouts in advance. All workouts will be automatically added the workout catalogue so you can always go back and take a class you liked whenever suits you. For now, all of the workouts are designed to be taken inside your home or a gym.

Apple had assembled quite the crew for its instructor team for launch. Canadian Kyle Ardill is in the line-up, and there’s a face that will be very familiar to Toronto SoulCycle fanatics in the form of Tyrell Désean. The search for the trainers took several months, with Apple visiting a variety of classes in studios, parks, and other locations to scout the very best talent for the program. Speaking of the selection process, Blahnik explained, “Of course we wanted the Fitness+ Trainers to be specialists in their field, but we also wanted each of them to have their own inspiring fitness journeys and life experiences that we believe would resonate and inspire our users. And it was really important to us that they had a passion not just for the very fit, but also for the beginner. We wanted Fitness+ to be a service where everyone was invited to the party, regardless of your fitness experience or ability.” He adds, “Some of the trainers have spent their entire careers in fitness, and others are newer to the industry.  It was important to us that the team represented a wide range of ages and life experiences as well as expertise.”

As mentioned in Jay’s quote above, the whole point of Apple Fitness+ is to get more people closing their rings more often – and the platform takes metrics engagement to a whole new level. Once users have chosen a workout, they’ll see the metrics from their watch appear right on the screen for an added level of motivation. The metrics are intelligent, too – for example, when an instructor asks you to check your heart rate, your heart rate will automatically become the focus metric on screen. In other scenarios, if an instructor has called for 30 seconds of a particular exercise, a countdown timer will appear on screen so you know exactly how much longer you have left. “Seeing this information animate at exactly the right time with the right information can be incredibly motivating, and make it easier to get through your workout,” Blahnik says of the feature. Not into seeing your metrics one day because you’re keen to just focus on the workout? You have the option to hide them whenever you’d like. And for ring-closing fans, if you close a ring during your workout, the celebration that usually appears on your watch face will happen on whatever screen you’re doing your workout on instead so you don’t miss it.

At present, the platform has been designed as a fairly solitary exercise (excuse the pun) with little interaction opportunities between users. However, all of your workouts will count towards your badges, challenges and awards and if you have Activity Sharing on, your friends will be able to see your workouts. There is one in-built motivator on screen in the form of the Burn Bar which allows you to see how you stack up against other people who have taken the workout, which is perfect for those that enjoy a little (or a lot) of healthy competition.

In music to our ears, Apple is really emphasizing the inclusive nature of the program. This is certainly a platform designed for all levels of fitness and to encourage anyone who wants to get into a more regular routine to do so in a very easy way. There’s a beginners program on offer to help anyone who hasn’t previously taken studio classes to get comfortable with the moves and style of the classes, and as mentioned above, all classes feature modifications so users can take it at their own pace. Offering a variety of class lengths was also important for this reason, with Blahnik noting that they wanted to celebrate and encourage any activity, no matter the duration. “We wanted to build a fitness service where dance workouts were given as much love as HIIT workouts, where 10 minute workouts were as celebrated as 45-minute workouts,” he says. “[We wanted to build] a service where everyone felt invited to the party, regardless of what motivates you, moves you or inspires you.” In a heartwarming addition, the instructors also wanted to find a way to make classes more accessible so they all learned sign language to be able to communicate the most important messages throughout the classes.

Users will need an Apple Watch to access the platform and Apple launched two brand new options this week alongside Fitness+.

Apple Watch Series 6 (prices start at $529) features a beautiful new screen with an updated always-on retina display which is 2.5 times brighter than the Series 5 when outdoors. It’s packed with a host of suped-up tech features, 18-hour battery life and faster charging capabilities. Perhaps its most impressive feature is the new blood oxygen sensor and app which allows users to measure their blood oxygen saturation right on their wrist, providing a new level of health information to users to help them understand their overall fitness and wellbeing. Series 6 also sees the introduction a brand new blue aluminum case (which joins the silver, space grey and gold options), as well as a (PRODUCT)RED option with matching bands. There’s also a new graphite option available in the stainless steel offering, alongside an updated yellow gold colour. As for the bands, Apple is launching a brand new, first-of-its-kind solo loop – a continuous, stretchable band offered in a variety of sizes (nine, to be exact) so all users can find their perfect fit. The solo loop is offered in silicone, as well as a soft braided yarn. Apple Watch Hermès will also see new band inclusions in the form of the Hermès Attelage Single Tour and the slimmer Attelage Double Tour bands. 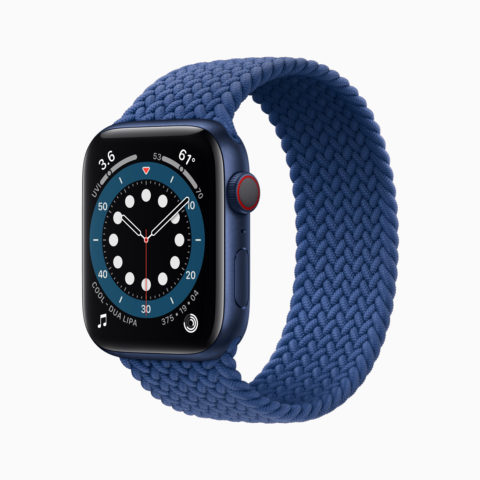 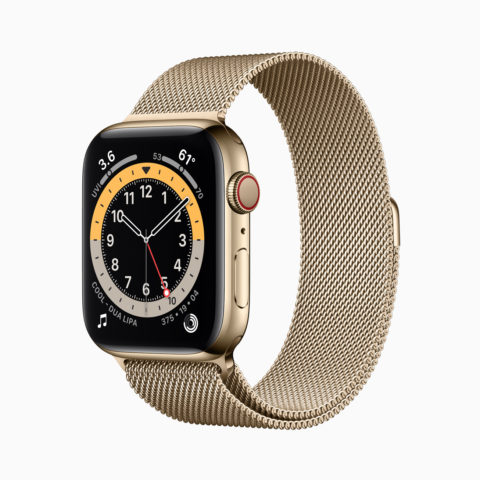 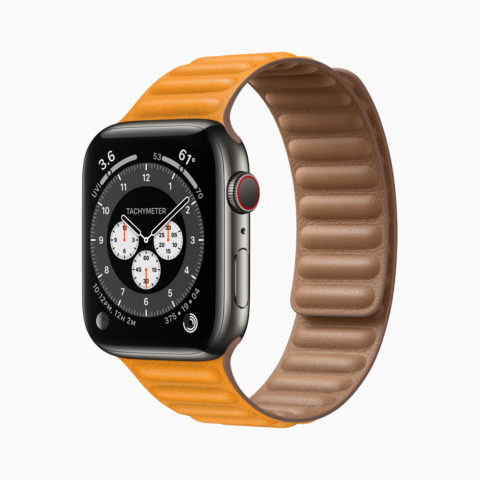 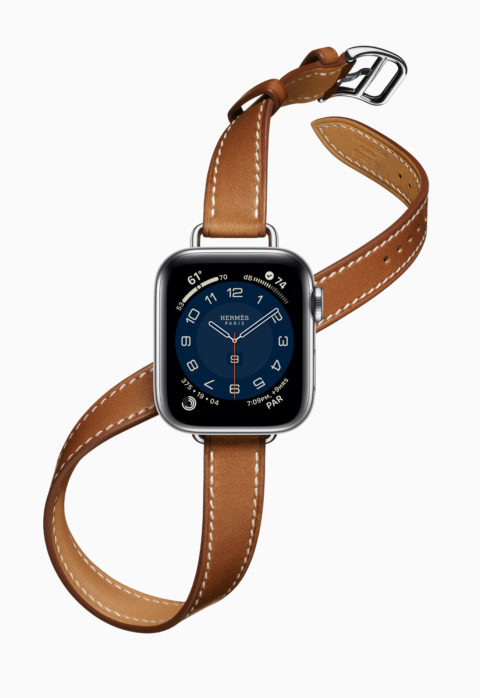 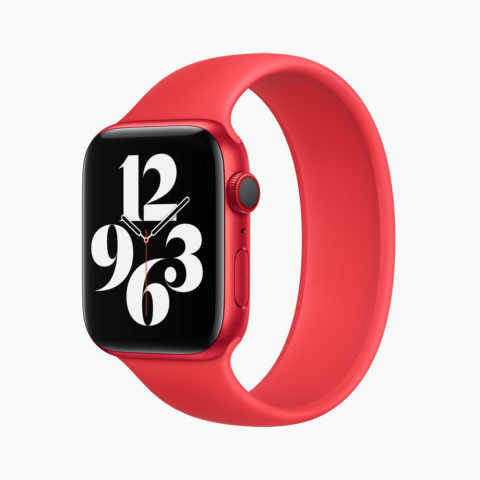 The company also introduced Apple Watch SE (prices start at $369), a more affordable version of the watch, packed with all of the essential features. Apple Watch SE has the largest and most advanced retina display and features the same accelerometer, gyroscope and always-on altimeter as Apple Watch Series 6 (and wellness and safety features like fall detection, emergency SOS and noise detection). It is available in three aluminum case finishes – gold, silver and space grey – and with a variety of bands, including the new solo loop and braided solo loop.

Apple Fitness+ will be launching in Canada towards the end of the year (watch this space for exact dates). The cost for the platform will be $12.99 a month or $99.99 for the year. Classes are offered in English with the option of French Canadian subtitles.