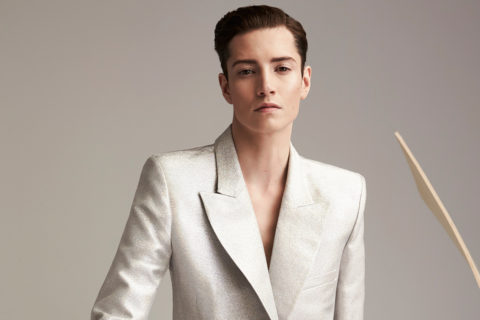 "There is still a long way to go, but each day it's getting closer."

In the documentary Krow’s Transformation, B.C.-based model Krow Kian—who happens to be on our April cover—shares the story of his transition to becoming a male while highlighting the trials and tribulations associated with the process. Kian, who started to model in his early teens, returned to the fashion world after his transition in the most bombastic way possible: Being cast in the Louis Vuitton Spring 2019 women’s runway show in Paris. “It has been really positive so far and I’ve had a lot of support,” Kian says about his re-entry into the industry. “I’ve been lucky enough to not face judgement, only people curious about what being transgender means.”

Kian has since graced catwalks for brands like Valentino, Roland Mouret and Alexander McQueen, and earlier this month, he announced that Krow’s Transformation had won six awards in the Docs Without Borders Film Festival. We caught up with the rising star to hear more about his journey and how it’s inspiring others as he observes International Trans Day of Visibility.

How has your work as a model allowed you to connect with the trans community?

Previously, the only community I was part of was the cosplay community, where I met many trans friends. Modelling has given me a platform to represent trans people, and better interact with the queer community at-large.

In our conversation for the April issue, you mentioned that you get a lot of messages from trans youth; how does your story inspire them?

Who inspired you the most during your transition?

Because I had never seen an openly transgender man in media, I only had my trans cosplay friends to look up to and be inspired by. They made me realize there were options, and I wasn’t just weird.

What are you taking time to reflect on today on International Trans Day of Visibility?

Seeing that it’s not just the fashion industry that is accepting,  but that the whole world is slowly coming around. There is still a long way to go, but each day it’s getting closer.

What’s your biggest piece of advice for anyone who is struggling with their identity or transition?

Being true to yourself will make you a lot happier than trying to please others. Take the time to explore your identity and figure out who you are, if you are confused. Everyone is an individual and will represent differently.

Is there an organization that works with the trans community that you’d like to give a shout out to?

Sadly, it was not in place when I started my transition, but TransCareBC has streamlined the process for those trying to navigate support while transitioning, from accessing therapists to surgeons. Three Bridge’s Community Health Center is where I started my journey and they’re awesome!

Photography by Chris Nicholls. Jacket, $1,395, and pants, $1,285, Paco Rabanne at The Room at Hudson’s Bay. Shoes, $1,250, Christian Louboutin. Left ring, $400, Jennifer Fisher. Right ring, $320, Lisa Corbo at George C.
Get the best of FASHION in your inbox Thanks for signing up!
The latest fashion, beauty and celeb news delivered right to your email #FASHIONforall Now, check your inbox to complete your subscription
We won’t ever use your email address for anything else
Want even more FASHION? Follow us on social media.