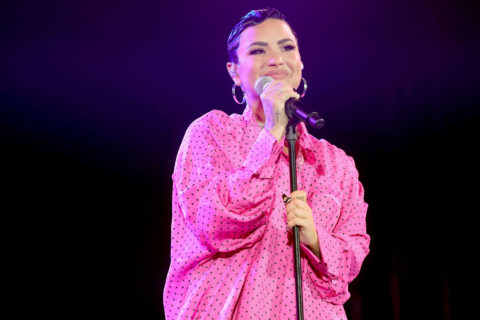 Demi Lovato Comes Out As Non-Binary

“There's nothing more freeing for me than to be unattached to a role that society wants me to play.”

Singer Demi Lovato announced today that they are non-binary and will be using the pronouns they/them moving forward. The musician shared the news in a video shared on Twitter, followed by a series of tweets explaining their decision.

Today is a day I'm so happy to share more of my life with you all- I am proud to let you know that I identify as non-binary & will officially be changing my pronouns to they/them moving forward ?

“I’m still learning and coming into myself, and I don’t claim to be an expert or a spokesperson,” they said. “I’m doing this for those out there that haven’t been able to share who they truly are with their loved ones.”

Lovato — who came out as pansexual in March, meaning they can be attracted to anyone regardless of gender — called this new discovery a “revelation” and said it has come after a lot of healing and self-reflective work.

Lovato elaborated on the topic on the first episode of their new podcast, 4D With Demi Lovato, engaging in a discussion with non-binary artist Alok Vaid-Menon about what it means to be non-binary and debunking stereotypes and misconceptions associated with the LGBTQ+ community.

In the episode, Lovato said that they were living inauthentically and feeling uncomfortable for years before reckoning with their identity. They recently opened up about their struggles with mental health and addiction in the YouTube docuseries Dancing with the Devil, which followed the events surrounding Lovato’s near-fatal overdose in 2018.

Vaid-Menon raised the point that because they are in the public eye, some people may accuse Lovato of coming out for attention, or to further their career in some way. To that, Lovato said they understand, but they can’t afford to care. “For the first time in my life, I’m putting my wellbeing over my career. And that’s the difference in somebody doing something for attention, versus speaking your truth,” they said.

“I know that not everybody is going to love that this is me… [but] I can’t shove it down or suppress it any longer, or I’ll end up where I did a few years ago. And I never want to end up there again.”

Lovato recalled their overdose in 2018 as a result of them suppressing their true self to please those who wanted them to be “the sexy, feminine pop star in the leotard.”

During the podcast episode, Lovato and Vaid-Menon also touched on the fluidity of gender expression, noting that gender identity doesn’t necessarily translate to the way we present.

Living outside the gender binary is nothing new. For thousands of years, Indigenous cultures around the world have embraced gender and sexual diversity, but its common acceptance was largely repressed with the onset of colonization in the Western world.

With a growing number of people now coming out as queer, transgender and non-binary, the existence and validity of these identities is being reinforced. “It’s not that we are new, it’s that we’ve been so thoroughly erased that the only response is to be visible,” said Vaid-Menon.

In recent years, other big names in the entertainment industry have come out as non-binary and gender nonconforming. In December, Canadian actor Elliot Page announced they are transgender and non-binary, saying, “I can’t begin to express how remarkable it feels to finally love who I am enough to pursue my authentic self.”

Coming out is without a doubt a daunting experience. When celebrities — who are subject to constant scrutiny from the public — do so, they shape the entertainment industry to be more inclusive, while expanding the scope of representation for gender-diverse people.

For Lovato, coming out is a liberating experience. “There’s nothing more freeing for me than to be unattached to a role that society wants me to play.”