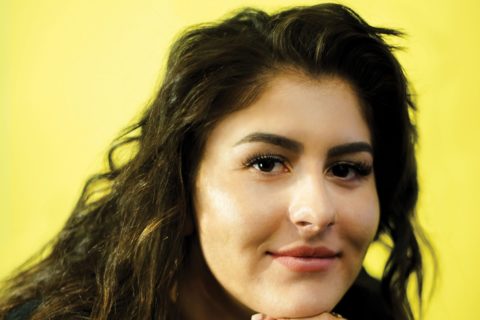 From Bianca Andreescu to Dr. Alaa Murabit, we're highlighting the Canadian women who are having a moment right now.

At just 19 years old, Bianca Andreescu is already a household name. Having won the 2019 Rogers Cup (the first Canadian woman to do so in 50 years), the Ontario native and current World No. 14 has her eyes set on becoming a world champion. “Short term, my goal is to crack the top 10, win a grand slam [and] become number one in the world before the end of the year; long term, my goal is to have an impact on the sport and the lives of the future generations who will play,” she tells us.
That impact has already begun, with Andreescu garnering worldwide praise over the way in which she consoled Serena Williams during the aforementioned tournament’s final. It was an instinctive reaction, she says, adding: “In that moment, what was more important than winning or losing was supporting another female athlete who has paved the way for a lot of young girls, myself included. I just wanted to show her some love and support in a difficult moment.” Spoken like a true champion. —Maddison Glendinning

A day that I’ll never forget… thank you to the city of Missisauga who hosted this amazing rally and to everyone that came out! I feel so blessed! Much love ❤️#proudCanadian

Dr. Alaa Murabit wears a few pretty impressive hats. Aside from being a doctor, speaker, writer and feminist hero, she is also a United Nations global Sustainable Development Goals advocate (fit that on a business card!), where she supports the UN’s 17 sustainable development goals for climate change, women’s rights and inequality reduction; a UN high-level commissioner on health employment and economic growth, where she promotes investing in health care to spur economic growth; and part of the Emerging Leaders Task Force, which brings together women from marginalized communities around the world for support and training. Born in Saskatchewan, Murabit moved to Libya in 2005. She returned to Canada in 2016 and now lives in Vancouver.

“I knew from when I was very young that I wanted to be a doctor. My dad and my sister are both surgeons, so, growing up, I remember the conversations we would have about saving lives. I have a medical degree, but in 2011, when I was 21, I founded The Voice of Libyan Women (VLW) during the Libyan Civil War. That’s when my brain switched; there are so many ways to impact so many more people.

If you look at countries in conflict, there’s a significant moment when social norms are up in the air and you can significantly change gender roles and social norms and challenge the structure. VLW looks at how we can take advantage of those moments to recognize how women and girls face different and more unprecedented risks than men and boys do in conflicts and also how women are incredible architects of peace.

The most powerful people in my life have been my parents. And yet by every conventional standard of power, they probably don’t have it. My mom was a stay-at-home mom with 11 kids, and I think her footprint on the world is bigger than mine will ever be because of the way she raised us. I think we all hold unique power, and it’s all about how we leverage that with others that makes us significant.” —Pahull Bains

Canadian footballer Christine Sinclair has ruled women’s soccer for almost 20 years. With 182 career goals, she is the number two scorer in the world, male or female. Going into this past summer’s FIFA Women’s World Cup, the Burnaby, B.C., native was four goals from overtaking the current record holder. And while she wasn’t able to get to the top, she still became the second currently active player to score 10 goals in five Women’s World Cups. American midfielder Megan Rapinoe earned a lot of attention for speaking out about gender pay inequality and for dissing President Trump, but you have to admire Sinclair’s humble keep-your-head-down dominance. —Greg Hudson

On the field she’s team captain, and off the field Christine Sinclair is the new honorary campaign chair of the #ActsofGreatness campaign. Join @sincy12 by donating at https://t.co/9pmJkPfsRG. pic.twitter.com/NEUyrSDHRz