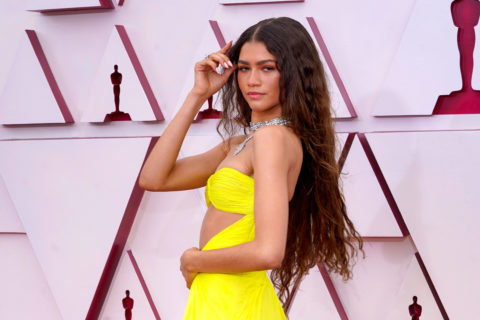 Zendaya’s Oscars Look Was Inspired By —Who Else? — Cher

Stylist Law Roach shared a behind-the-scenes peek at the breathtaking yellow Valentino dress worn by the 'Euphoria' star to the 2021 Oscars.

Zendaya arrived on the Oscars 2021 red carpet with what appeared to be a personal wind machine. Alas, it was just the powers that be blessing the 24-year-old Euphoria star with a few dramatic gusts, making for truly epic red carpet photos. Naturally, the young style star shut down the competition in her vibrant yellow goddess gown.

And should we be surprised? Working with her friend and stylist Law Roach, we’ve come to expect nothing less than fearless, directional red carpet dressing from Zendaya who regularly attends Hollywood events in bold colours, daring silhouettes and epic vintage pieces (like this YSL Haute Couture from 1982 — from Roach’s personal archive — originally owned by trailblazer Eunice Johnson and worn by Zendaya to the ESSENCE Black Women in Hollywood Awards earlier this month).

For her Oscars 2021 look, Roach outfitted Zendaya in a breathtaking nearly-neon yellow Valentino gown and a casual $6 million in Bulgari diamonds. The style collaborators complemented the dress with matching Jimmy Choo platform heels, long nude nails and cascading, center-parted mermaid hair, all trademarks of the iconic woman that Roach called a “constant inspiration” when sharing a behind-the-scenes peek at Zendaya’s Oscar moment: Cher.

Roach posted a photo on Instagram Stories of a yellow dress worn by Cher for a taping of the Sonny and Cher Show in the 1970s, which had a midriff-baring cutout just like Zendaya’s breezy Valentino. Cher’s lifelong collaboration and friendship with designer Bob Mackie famously began in 1967 when he dressed the raven-haired beauty for an appearance on The Carol Burnett Show. He went on to outfit her for the Sonny and Cher Show (no doubt responsible, then, for the aforementioned yellow gown), once telling Harper’s Bazaar: “She would have up to 20 costumes for an hour-long show. It might be on camera for 30 seconds or 10 minutes, but she wore lots and lots of clothes so she became this amazing clothes horse. I could get a piece of beautiful matte jersey and we could make her a dress in 10 minutes because her body was incredible to work with. She looked good in so many things, the more interesting and exotic, the better. She said one time, ‘I’m like your fucking Barbie!!'”

Mackie dressed Cher in some of her most memorable fashion moments, including the feathered naked dress she wore to the 1974 Met Gala and the showgirl number she donned for the 1986 Oscars.

For more fun Cher fashion inspiration, check out this video of some of the costumes she wore on the Sonny and Cher Show: