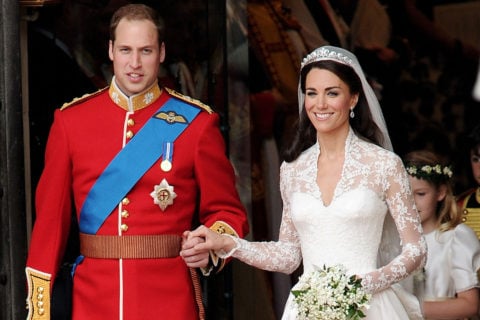 In honour of Will and Kate's 10th wedding anniversary on April 29, we're looking back at some of the most charming — and surprising details — of their royal wedding.

There’s no grander affair than a royal wedding — especially when it’s the wedding of a future king. Kate Middleton and Prince William’s nuptials were, of course, no exception. In honour of the Duke and Duchess of Cambridge’s 10th wedding anniversary — which they’re celebrating on April 29 — we’re looking back on some of the behind-the-scenes secrets from Will and Kate’s royal wedding that you forgot about — or didn’t know to begin with.

That’s right. Prince William’s grandmother may literally be the Queen of England, but it turns out the happy couple didn’t let the royal family in on their engagement news right away. According to the recently aired ITV documentary, The Day Will and Kate Got Married, Kate’s parents, Carole and Michael Middleton, found out about the proposal before most of the royals. Will proposed three weeks before the exciting news was announced publicly in November 2010, and he actually told his family that same morning. When asked about it later on, Charles said he was “obviously thrilled.”

Kate styled herself for the official engagement announcement

One would think that Kate would’ve sought the help of a stylist for the couple’s very public engagement announcement, but she didn’t need to. The ITV anniversary doc also revealed that Kate visited Daniella Helayel, the founder and former creative director of the label Issa London, to see if she had any blue dresses that she could wear for a “very special lunch.” We now know she was looking for something to match her sapphire engagement ring (which, by the way, was the same one Prince Charles gave to Princess Diana many years prior). Kate couldn’t find the right fit at Helayel’s studio, but luckily remembered she already had a blue wrap dress from the brand sitting in her closet. “She always knew what suited her, she always had her own style,” Helayel says in the documentary. That’s the dress Kate ended up wearing, and it quickly sold out after the big announcement.

Kate also showed that same enterprising spirit on her wedding day, when she famously did her own makeup — after getting some tips from a makeup artist at Bobbi Brown.

There’s no doubt the Cambridges’ wedding was a star-studded fête — David and Victoria Beckham, Elton John and Joss Stone were just a few of the celebs in attendance. But the 1,900-long guest list wasn’t just made up of celebrities, diplomats and royals. Kate also made sure to invite people from her community, like the mailman, Ryan Naylor, and local butchers, Sue and Martin Fidler. “Martin was in the shop with the postman, and Martin called me and said, ‘There’s a letter addressed to you,'” Sue said in the ITV doc. “I picked it up, and wow, I was in tears. I couldn’t believe Martin and I were worthy of an invitation.”

And Pippa Middleton was super helpful

Kate’s younger sister Pippa was very serious about her maid of honour duties. Apparently, she personally phoned some of the guests in the Middletons’ neighbourhood to invite them to the royal wedding. Local pub owner John Haley talked about the very surreal experience for the documentary: “I phoned the number back and she said, ‘Hi John, this is Pippa.’ She said, ‘Kate would like to know if you’d like to go to her wedding.’ I honestly never expected it.”

You’ll probably remember that Kate had a small, delicate bouquet of white flowers. Each one had its own special meaning: There were lily-of-the-valleys, representing a return of happiness; hyacinths, for constancy of love; ivy, which stands for fidelity, marriage, friendship and affection; myrtle, also for marriage and love; and sweet Williams, for gallantry (and, obviously, the added touch of sharing a name with her husband!). According to the Palace, a sprig of myrtle originated from flowers at a former royal residence that were planted by Queen Victoria herself in 1845, and it’s been a tradition for royal bridal bouquets since the monarch’s eldest daughter, Princess Victoria, when she was married in 1858.

Plant life played an important life throughout the ceremony

It’s hard to forget the stunning image of lush English field maples lining the aisles of Westminster Abbey for Will and Kate’s royal wedding. The BBC reports that the trees symbolize reserve and humility, and after the wedding, they were replanted at Prince Charles’s vacation home in Wales.

In a sweet touch, the dresses for the four young bridesmaids were made using the same fabric as Kate’s iconic Alexander McQueen wedding gown. As a keepsake, each bridesmaid had their name and the date of the wedding hand-embroidered into the lining of their dress. The Palace added that the young girls also wore wreaths — made of ivy and lily-of-the-valley flowers — that were inspired by the headdress Kate’s mom wore at her own wedding in 1981.

During their wedding festivities, Will and Kate served an intricate, eight-tier fruitcake, created by Fiona Cairns, that took weeks to design and make. According to the ITV doc, Kate had settled on a cream and white look, with lace detailing that was actually modelled after a piece of lace from her wedding gown. When it was finally time for the big day, elements of the enormous cake had to be transported to Buckingham Palace in 400 different boxes and assembled on site. The team even had to take down a door in the palace to make room for transporting the cake — which Queen Elizabeth II noticed with a joke. “When the Queen came to see us, the cake wasn’t completely finished, I remember her saying, ‘I hear you have been dismantling my house,'” Cairns says in the documentary. “But it was all put back in the end, so it was fine.”