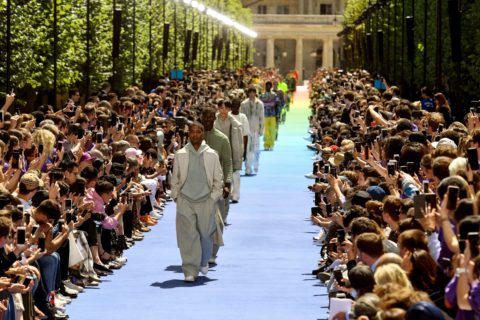 Virgil Abloh presented his much-anticipated first collection for Louis Vuitton Men’s in Paris this morning, and alongside the clothes –primarily head-to-toe white in shades of ivory, mushroom, eggshell and alabaster, with the most brilliant flash of insight being a puffer jacket quilted in wavy lines resembling the shape of the Microsoft Windows 95 logo – was a curious object: on every showgoer’s seat was a three page pamphlet titled “The vocabulary according to Virgil Abloh: a liberal definition of terms and explanation of ideas” typed-out in Courier font.

Earlier in the week, Abloh told Vogue’s Sarah Mower his intention for the collection was to “speak to the generation presiding” and it appears he’s taken that decree to both a figurative and a literal dimension.

The pamphlet contained Abloh’s take on common fashion words like ‘designer,’ and ‘after party’ in the form of quotes and personal anecdotes –for example: “Taupe: Virgil Abloh’s favourite colour since 1980” – but curiously included some heretofore nonexistent words like “Accessomorphosis” and “Margielaism.”

We’ve transcribed the Abloh-ese for your enjoyment, plus click here to read the full version of the voc-Abloh-ary.

Accessomorphosis: A portmanteau describing the transformation of an accessory into a garment, effectively evolving it’s functional form.

Margielaism: A term applied to garments or accessories which reflect the normative fashion religion of a reverent generation of young or younger designers to which Virgil Abloh belongs.