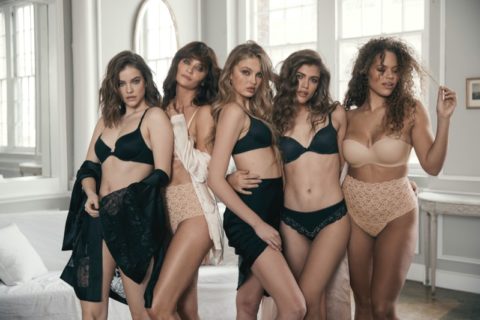 Victoria’s Secret has just revealed its newest campaign and it is the brand’s most inclusive campaign to date. The ad features extended size models Candice Huffine and Solange van Doorn, trans model Valentina Sampaio, and two of the brand’s OG Angels, Helena Christensen, 51, and Daniela Pestova, 49. Christensen was also the photographer behind the campaign.

The diverse cast appears alongside some of the lingerie giant’s current Angels, including Jasmine Tookes, Barbara Palvin, Romee Strijd and Lais Ribeiro. It’s the first time in the brand’s history that it has included such diversity of models in terms of age, gender, race and body shape.

In 2018, former creative chief Ed Razek told media following the brand’s final show (though that part was unbeknownst to the company at the time) that there was no appetite from consumers to see transsexual models on the catwalk, or models of varying body shapes as the show “is a fantasy.” He later apologized for the comments but the damage was done. The brand has been fighting to regain consumer favour since that time, especially with the launch of size-inclusive brands like Aerie, Savage by Fenty and most recently SKIMS by Kim Kardashian West.

Sampaio was hired by Victoria’s Secret in August of last year, making headlines as the brand’s first openly transgender model.

The news follows the brand’s announcement earlier this week that, in addition to temporarily closing all of its North American stores to help stop the spread of Covid-19, it is also closing its online store until the end of the month.

Photograph courtesy of Victoria's Secret
Get the best of FASHION in your inbox Thanks for signing up!
The latest fashion, beauty and celeb news delivered right to your email #FASHIONforall Now, check your inbox to complete your subscription
We won’t ever use your email address for anything else
Want even more FASHION? Follow us on social media.