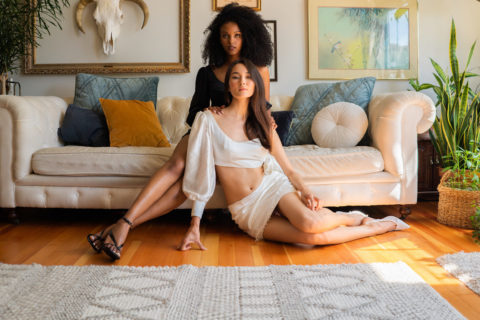 After two successful pre-order drops last year, Vancouver-based brand Adeera has shifted to a made-to-order model; good news for anyone in the market for a little wardrobe pick-me-up these days.

Co-founders Emma Reynolds and Shannon Hall see the switch as an ideal extension of their label’s sustainably-minded approach. “We got a lot of messages saying that customers would love for us to open up the pre-orders again once they had closed,” says Reynolds. “We thought, why not make the [pieces] available so people can buy whenever they want? They’re still limited in the sense that the collections are only available until the next one launches.”

For now, Adeera’s selection includes romantic, bow-festooned separates including crop top and corset styles – silhouettes that possess coveted versatility in terms of their ability to dress up a look, or be dressed down by styling with something more casual. Reynolds notes that there’s a certain timeless appeal to the pieces; that’s not surprising given their Victorian era influence – a period of history still referenced by fashion brands far and wide because of its decadence and attention to detail.

“I’ve always gravitated towards it,” Hall says of the historical moment’s draw. She highlights the era’s fashion being reflective of a self-expressive intention at a time when women were still heavily repressed. And she and Reynolds hope their designs and brand ethos act as an inspiration for modern, motivated women.

Their approach to running a fashion company reveals a value system that strives to put ethics and environmentalism at the forefront. All of Adeera’s pieces are hand-crafted in Vancouver using Oeko-Tex Standard 100 certified Mulberry silk, and Reynolds and Hall address their vision for a fairer fashion industry – including garment workers earning an above-livable wage – via the brand’s website.

“It’s not just about selling pretty clothes,” says Reynolds of their philosophy. “From the very beginning, the brand was an idea much bigger than that.” In addition to their transparency and thoughtful, waste-reducing design practice, the pair want to ensure they give back to the community where their business is based. Ten per cent of Adeera’s profits are donated to Covenant House Vancouver, and Reynolds adds that this is “just the beginning” in terms of their philanthropic ambitions.

As Hall says, their fans are well-attuned to the importance of spending their dollars in a meaningful way. “The pandemic really opened people’s eyes; they’re more aware of how important sustainability is, as well as supporting one another,” she says. One more thing she wants you to watch out for? A new release of light-weight wool pieces coming soon.

Photography courtesy of Adeera.
Get the best of FASHION in your inbox Thanks for signing up!
The latest fashion, beauty and celeb news delivered right to your email #FASHIONforall Now, check your inbox to complete your subscription
We won’t ever use your email address for anything else
Want even more FASHION? Follow us on social media.