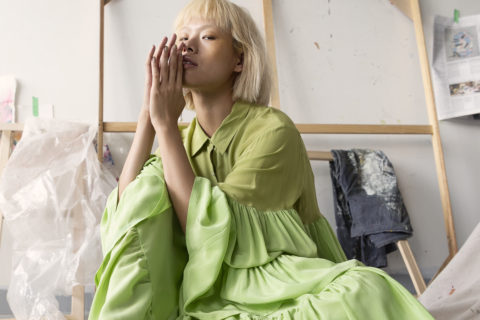 Why upcycling is one of the most important trends in the fashion industry today.

Canadian Julia Grieve pioneered the idea of upcycling when she founded Preloved 25 years ago; its offerings include T-shirts, sweaters and loungewear made with swatches of upcycled denim and wool. But despite the brand’s longevity and industry kudos, Preloved’s eco-minded ethos was eclipsed by the fast-fashion giants that dominated the 2000s.

Now that the frightening facts about the environmental and ethical impacts of the garment industry have become inescapable, repurposing fashion has another opportunity to take hold, even at the designer level. “Upcycling is not something that is usually associated with luxury; however, I think this is changing,” says Natalie Kingham, fashion and buying director at MatchesFashion. “Brands such as Germanier and Chopova Lowena have shown that they can be considered incredibly fashion-forward in the luxury space and still have a focus on sustainability.”

Whether it’s humble denim, vintage rugs or glittery lamé, there’s no limit to the textiles that today’s designers can breathe new life into. Here are some fashion brands that are upcycling their way into our hearts:

In the fall of 2018, Margherita Missoni became creative director at the previously licensed M Missoni. “Before accepting, I started thinking about how I could give it a point of view while keeping it part of the Missoni world,” she says.

She visited the storied brand’s archives and discovered a wealth of materials from its home decor line. The Spring 2020 collection features jackets and coats that incorporate MissoniHome archive fabrics from past decades and sweaters that are made with upcycled yarn.

When Charlie’s Angels star Kristen Stewart appeared on the red carpet for the film’s L.A. opening last fall, there was something more outstanding about her outfit than its bling factor. Stewart was clad in a cocktail dress slathered with upcycled Swarovski crystals by Paris-based designer Kevin Germanier. But unlike some who flaunt their ethical practices to entice an en­vironmentally mindful clientele, Germanier stresses that aesthetics come first in his designs. “I never use sustainability as a marketing tool—I never emphasize the fact that I upcycle,” he says. “I’m not here to educate people or give a moral lesson to someone; my job is to make beautiful products. I’m a designer.”

Germanier sources fabrics at places such as the Marché Saint Pierre and says he’s grateful for all the vintage vendors and people who offer him materials to use in his collections. “Collaboration and the community are extremely important,” he says. “I’m really blessed that people are reaching out to me.”

Paris-based Calla Haynes, who grew up in Toronto, found a way to express her creative inclinations in a sustainable way after putting her eponymous brand on hiatus in 2015. “I wanted to do something meaningful with all the fabrics that meant so much to me, and I was also a bit overwhelmed with all the dead stock,” she says about the custom-print textiles that were left over when she shelved her line. Meeting minimum orders and the “wishful thinking” of producing too much in the hope of selling it are two reasons why designers have a hard time escaping excess, says Haynes, who has also worked for Rochas and Nina Ricci. “That’s the strange reality of this industry: We accept having all this waste.”

Haynes initially sent her leftover fabrics to Morocco to be made into Boucharouite rugs but has since expanded her upcycling endeavours to include babouche slippers, which are made from well-worn vintage Moroccan rugs. “It’s funny because those rugs are almost a double-recycling thing since technically Boucharouite rugs are made from old fabric. They’ve already been recycled into rugs, and [now] they’re being recycled into shoes.”

For Montreal-based designer Courtney Pedersen, her reliance on upcycling was born from a tension between loving fashion and loathing its wastefulness. “I studied fibre arts at a small school in Nelson, B.C.,” she says. “That was a lot of years ago, but even when I was doing that, I was pretty concerned about the environmental impact of the textile and garment industries.”

Pedersen’s collection consists of one-of-a-kind garments made from materials sourced in thrift shops like Value Village. “I’ve found everything from silk dévoré to fine cotton gauze to linen there,” she says. “I’ve even used bedsheets. Some people might be squeamish about that, but I think in today’s age of being very aware of what’s happening environmentally, it’s a good thing to be open to.”

Amsterdam-based Peterson Stoop approaches sustainable design in a holistic way, addressing not only the inherent waste factor but also how harmful elements of creating clothing and accessories can be. Co-founder Jarah Stoop notes that the outlook she shares with Jelske Peterson evolved after they broke into the industry the “traditional” way in 2013. “At the time, we were designing bags and shoes,” she says. “We didn’t really know what direction it would take us because we both came from art school and had all these idealistic ideas about starting a brand—or maybe [they were] unrealistic ideas, because we thought we could produce everything in-house and make a really big collection.”

Now the duo uses existing materials to make upcycled shoes that boast some familiar characteristics—several of the styles use pieces taken from worn-out Nikes and Converse Chuck Taylor All Stars—and their “remastered” wares are a testament to the level of craft and ingenuity that’s routinely ignored in a world of mass manufacturing. “I think a lot of people don’t realize that things in shops have been made by somebody,” says Stoop. “They can be made by a robot, but most things have been touched by 20 or 30 people who have all done little steps in the process. That’s also why we make what we make: to really show that they have been made by hand.”

Looking for more upcycled goodness? Click here for a roundup of sustainably-minded buys.

Photography: 3_3_4_7 by Stacy Lee
Get the best of FASHION in your inbox Thanks for signing up!
The latest fashion, beauty and celeb news delivered right to your email #FASHIONforall Now, check your inbox to complete your subscription
We won’t ever use your email address for anything else
Want even more FASHION? Follow us on social media.