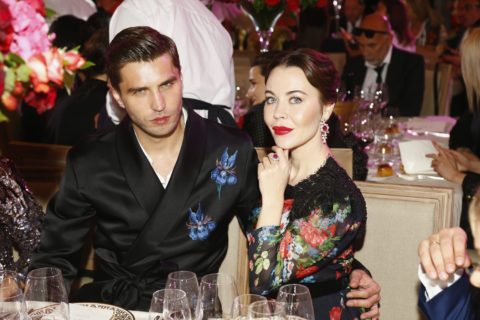 Ulyana Sergeenko, who showed at Paris Couture Week today, came under fire this morning after a private note she wrote to street style star Miroslava Duma was posted to Instagram. The notecard, bearing Sergeenko’s letterhead, read: “To my N****s in Paris,” signed with initials and a smiley face.

Considering both Sergeekno and Duma are white, the backlash was swift and Sergeenko immediately offered an apology. In it, she appears disappointed by the hostility directed her way and notes that Kanye West is one of her favourite artists. “I have never divided people on white or black… And yes, we call each other the N word when we want to believe we are just as cool as these guys who sing it,” she wrote in the apology. Marjon Carlos, a former staff writer at Vogue, called it a “soggy ass apology” via Twitter, and Matthew Schneier, a fashion reporter at the New York Times, called it “quite possibly the worst apology for casual racism I have ever read, and that’s saying something.” Sergeenko has since deleted her apology from Instagram.

Duma offered a similarly mealy-mouthed apology via her own Instagram this morning that read, “I sincerely apologize for my regrettable Instagram story that went out. The phrase referenced is from a Kanye West and Jay-Z song by the same title. The word is utterly offensive, and I regret promoting it and am very sorry.”

For the white people just tuning in, repeating a racial slur just because it happens to appear in a song you like is wildly inappropriate. Two black hip-hop artists singing the ‘n-word’ in a song they wrote is wildly different than two white fashion girls giggling over how “down” they think using it makes them.

Garage magazine toured Sergeenko’s couture presentation today and asked her to comment on the controversy. Her response? “I’m so upset I spoiled it,” referring to her own show.

UPDATE: A video has surfaced on Instagram of Miroslava Duma making homophobic and transphobic comments about blogger BryanBoy and trans model Andreja Pejic. The video, taken at a conference in 2012 features Duma speaking in Russian and captioned with English subtitles. Duma is asked how she feels about men dressing in women’s clothing and she responds, “Honestly, I dislike it. Because somewhere, on TV or in a magazine, a little boy could see it and that boy wouldn’t understand it correctly, react correctly. I think a certain kind of censorship and refined culture is needed here.” Duma has apologized for her comments in an Instagram post.

Photo by Julien M. Hekimian/Getty Images
Get the best of FASHION in your inbox Thanks for signing up!
The latest fashion, beauty and celeb news delivered right to your email #FASHIONforall Now, check your inbox to complete your subscription
We won’t ever use your email address for anything else
Want even more FASHION? Follow us on social media.