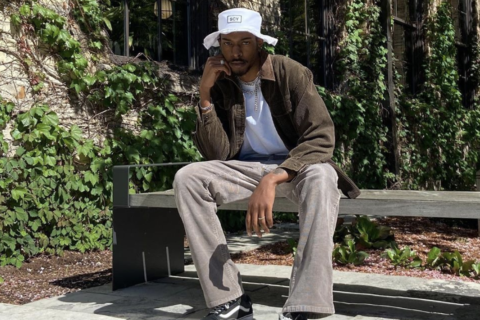 We’re seeing many shifts in the fashion industry right now, from a broadening of the types of models shown wearing a brand’s clothing to the methods in which that clothing is made. And while plenty of large-scale labels will see their businesses go through a period of great adjustment as they modify their operations to be more inclusive and innovative, there are many exciting emerging lines that already follow this approach.

Take Toronto’s Scy By Julius; the one-year-old label launched by Julius Armand offers hats, handbags, denim and more, all made by upcycling primarily thrifted materials. “I basically decided, let me glue some cargo pant pockets on a pair of jeans and see how it goes,” he says about how he started to conceptualize the pieces that he eventually began to sell. (You can find an example of the style on the brand’s website.)

“I was always into fashion,” says Armand. “But it was never really accepted as a job by my parents. So, I went to school for architecture. After I graduated, I thought, this isn’t really what I want to do.” Armand decided to apply the ingenuity allowed for in architecture to a fashion design context, and he follows a personal approach to the pieces he makes, noting “It’s things I’d like to see myself in” when he’s mulling over ideas.

Armand also wants to inspire his audience to see themselves in his pieces, and is doing so by enabling members of the public to submit themselves as a model for the brand. “I want to see [different] people in my clothing,” he says of why he has opened up crowd casting for Scy By Julius images. “Especially if they’re someone who’s already purchased something–why not give them the opportunity to showcase what they bought? And it helps me show other people that they can wear it, too.” He says he appreciates the “interpersonal” relationship this visual democracy fosters. “It gives it more of an experience between me, the creator, and the customer,” he says.

Ever forward-looking, Armand also sees himself expanding his brand’s collections to include more elevated pieces in the future. “I’m going to take it as far as I can go,” he says of continuing to make upcycled wares while also experimenting with other facets of design. “I also want to branch out more into high fashion, and become better at my craft.” He says that right now there’s a kind of niche market for his work given the brand’s streetwear aesthetic, adding, “I want to make pieces you can wear everywhere.”